Tottenham attacker Son Heung-min let his emotions pour after their 1-0 defeat by Manchester City in the Carabao Cup final.

A late second half header from Aymeric Laporte was enough for Pep Guardiola’s side to earn their fourth consecutive League Cup triumph at Wembley Stadium in front of 8,000 spectators.

Despite an improved second half display from Spurs, led by interim manager Ryan Mason, Son and his team-mates were unable to break down City’s resolute defence and fell short of another major trophy. 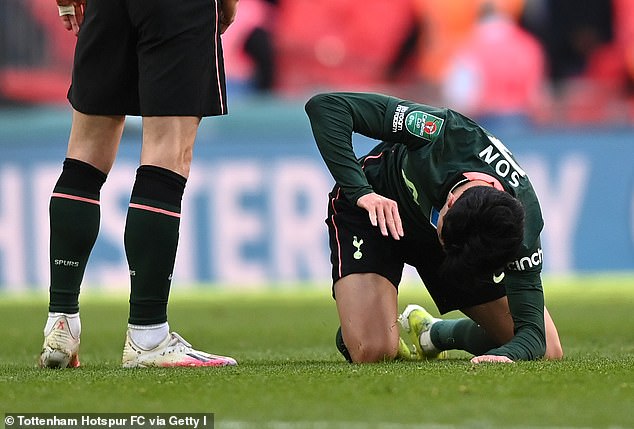 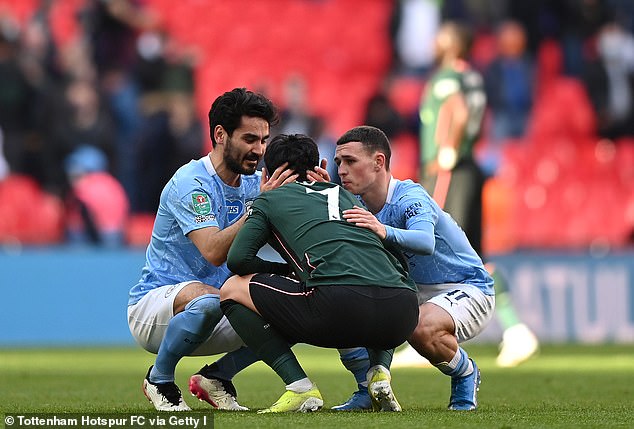 And after Paul Tierney had blown the full-time whistle, the South Korean could not hold back the tears as City celebrated under the Wembley arch.

Manchester City’s Phil Foden and Ilkay Gundogan comforted Son as he was left devastated with the narrow defeat.

Spurs boss Ryan Mason also revealed his pain as the club fell short of yet another potential cup triumph.

‘Pain. It hurts. I’ve been sitting in there as a player, I’ve played for this football club and lost a final, I know what it’s like,’ Mason, who was only appointed on an interim basis on Tuesday due to Jose Mourinho’s sacking, said. 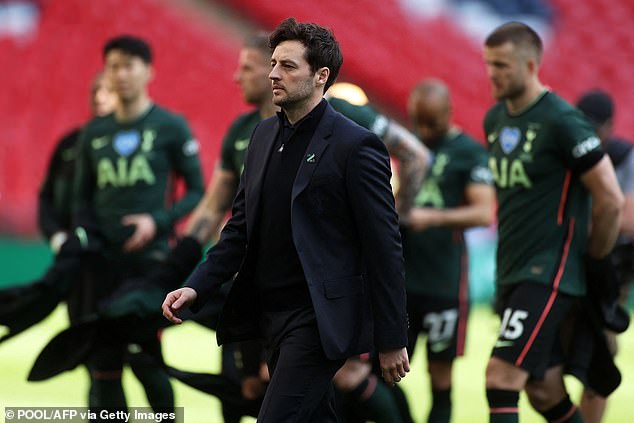 ‘And this group of players care deeply about this football club. I think we saw that today, they gave absolutely everything, 100 per cent commitment. We tried, we tried, it wasn’t enough today, that’s tough to take.

‘City are a great side, an incredible team but I think our group of players gave everything with what they have had to deal with in seven days, the lack of preparation but they gave everything, absolutely everything. That is something to be proud of.

‘I think when you lose a cup final, it’s disappointing. We’re all hurting. I am, the players are and I’m sure the fans are and everyone associated with the football club. It’s difficult to take. Obviously it’s my job, a coach’s job to start giving the players a platform and start preparing, start planning.’