So much for behind closed doors! Streaker runs on the pitch during Manchester United’s Europa League win over Granada… despite fans not being allowed into the stadium to watch the quarter-final clash

Fans might not be allowed into stadiums due to the Covid-19 pandemic, but this didn’t get in the way of one man’s urge to streak during a football match.

The bizarre incident took place during Manchester United’s first leg of their Europa League quarter-final tie against LaLiga side Granada.

With just five minutes on the clock, a man sporting a long beard and wild curly hair, spread his arms out as he ran across the field naked. 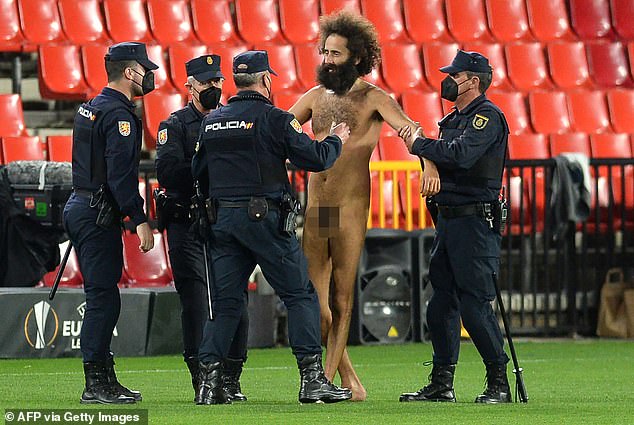 The man’s antics were briefly caught by television broadcasters before cameras quickly panned elsewhere to one of the players.

As the cameras turned their attentions away, the man who somehow evaded security to get onto the pitch was apprehended by police and escorted off the turf, allowing play to resume.

How the man could even get onto the pitch was a surprise, with fans not allowed into the Nuevo Estadio de Los Carmene stadium. 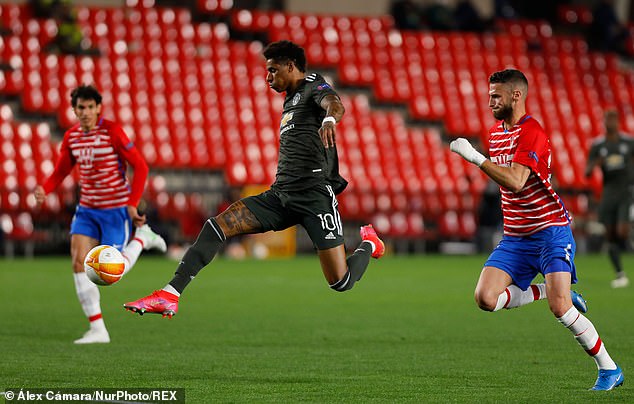 Though cameras picked up the streaker, they ever so nearly missed the first goal of the game when Marcus Rashford brilliantly slotted home to give United the lead.

Bruno Fernandes scored a stoppage time penalty to give the Red Devils a 2-0 advantage going into the second-leg at Old Trafford.