Any possibility of complacency entering Rangers’ minds was clearly extinguished by the knowledge that Celtic lay in wait.

By the time Nathan Patterson knocked in the fourth against Cove’s wilting part-timers after 43 minutes, the job here was more than done. It was clinical, professional stuff.

Steven Gerrard’s side began their Scottish Cup campaign by showing some of the traits that made them Premiership champions.

The next challenge in this competition should be a little more demanding. A fourth round Old Firm tie at Ibrox on the weekend of April 17 provides a showpiece event that will define this season’s remaining ambitions at both clubs.

For Rangers, the chance to move a step closer to a Double by again deflating their rivals – aiming to this week confirm Eddie Howe as manager – is an enticing prospect. With that on the horizon, any easing off the pedal would seem unlikely.

Certainly, the drive shown here should have pleased Gerrard. Returning to action after the international break and all the emotion that preceded it, Rangers paid their League One visitors the compliment of approaching the game with serious intent.

True, no further goals after the interval but it wasn’t for a lack of pressure or effort. The scoreline could have been doubled. As it was a Jermain Defoe strike and two from Kemar Roofe preceded Patterson’s finish. 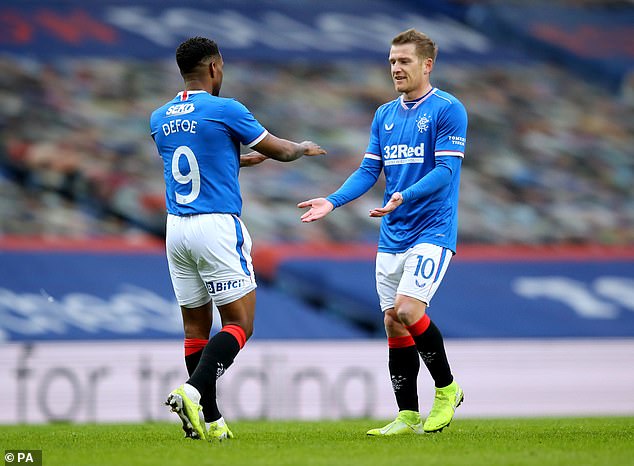 Sitting 20 points clear in the already-won Premiership, Gerrard’s men could yet complete that campaign unbeaten. The Ibrox manager has been clear, however, about his priority. More silverware. This cup.

They now know the pathway to Hampden after yesterday’s double draw. Defeat Celtic and a home quarter-final against St Johnstone or Clyde will follow a week later.

For Paul Hartley and Cove, the consolation of through that second period without conceding again was negated by an injury suffered by midfielder Jamie Masson. He was stretchered off the field on 67 minutes – following a lengthy delay for treatment -after catching his studs in the turf. It didn’t look good.

A serious absence for Masson would be a cruel footnote to the biggest game in the history of the ambitious north-east outfit. Hartley now turns his attentions to Tuesday evening’s visit to Clyde and boosting Cove’s hopes of promotion to the Championship. The short turnaround influenced his selection here. 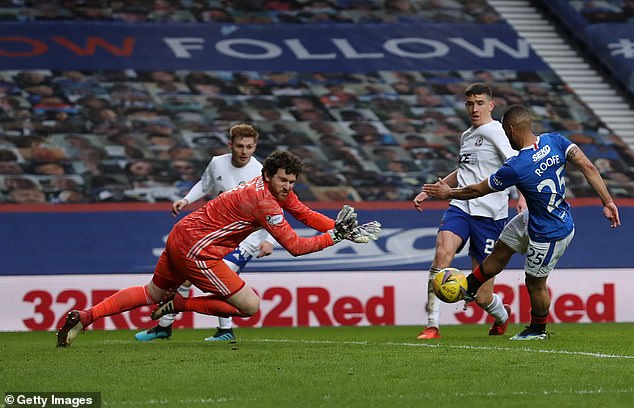 Knocks to Bongani Zungu and Jack Simpson tweaked Gerrard’s plans but he still used the squad. Scott Wright made his first start since signing from Aberdeen in early February, while Jon McLaughlin and Defoe returned to the line-up for the first time this year.

Gerrard was also able to pick Patterson and Calvin Bassey after Rangers appealed against their six-game SFA suspensions for breaching Covid regulations. Being ‘competitive’ was Cove’s primary aim at Ibrox. That was soon translated into trying to get out of their own half as the traffic became predictably one-way.

Rangers had to wait until the 24th minute for their opener – exquisitely taken – but could easily have been a couple up inside the first quarter of the opening period. Fresh from becoming the most capped UK player of all time, Steven Davis was in the mood to exhibit his evergreen range of passing.

A floated delivery found Wright. The forward’s sweet touch took him away from two defenders but the eventual strike was deflected wide off the back-tracking Ross Graham. Davis then perfectly measured a first-time daisy-cutter for the over-lapping Patterson. Roofe fired just wide from the cut-back. 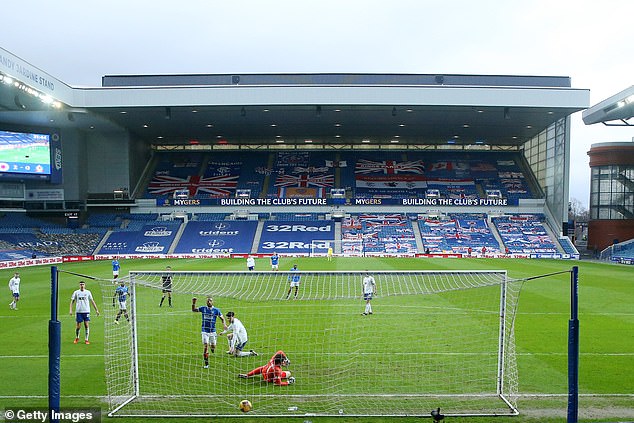 The ex-Anderlecht and Leeds man went closer still when he stabbed a shot against a post after a Davis corner broke his way. He wouldn’t have to wait long for reward. First, though, it was over to Defoe.

Cove attempt to play progressive football under Hartley. Building from the back is a key element of their approach. While that is admirable and will deliver long-term benefits, it is easier done when not facing the snapping hunger of the Premiership champions. Their ambition contributed to a hefty half-time deficit.

Davis picked off one loose ball before the halfway line to find Glen Kamara. The Finland midfielder fizzed a low pass into the feet of Defoe, who spun away from the slipping Fraser Fyvie to face goal.

In front of him, Roofe was hollering for a little through-ball. He was never going to get it. The sweetest of right-foot drives flew past help goalkeeper Stuart McKenzie from 25 yards for Defoe’s fifth goal of the season. The deluge was underway. 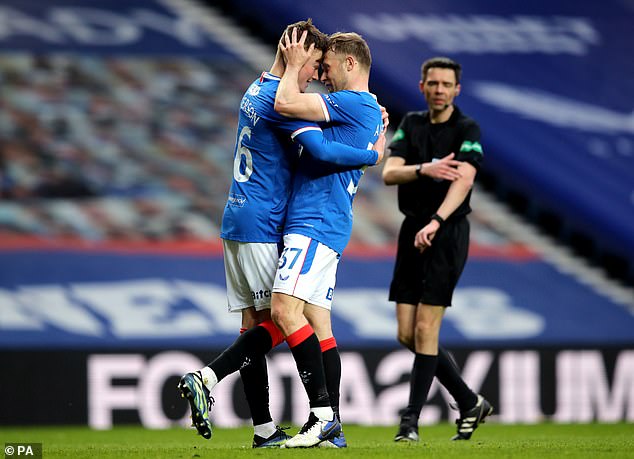 Defoe sent another effort narrowly wide under pressure before Roofe took over. Again, the chance had its roots in a Cove error when Broque Watson and Daniel Higgins got in a mix deep in their own territory. Bassey nicked in and found Defoe.

His low cross picked out Arfield and when McKenzie blocked the initial shot, Roofe pounced. His second – and the Ibrox side’s third – followed barely 60 seconds later. Wright surged onto a cute little pass from Arfield to drill low towards the near post. Roofe read it perfectly and finished high and powerfully beyond McKenzie.

The part-timers weren’t learning lessons. Penned deep by a Rangers press, Higgins attempted the riskiest of passes through his own area. Adam Livingstone was the target but Patterson picked it off before tucking away his second senior goal.

After the break, Defoe saw one goal-bound effort blocked and fired another shot wide. Rangers remained camped around the Cove box yet couldn’t further alter the scoreboard, with Connor Goldson and substitute Cedric Itten among those going close.