It was an afternoon that started with calamity but ended pretty much perfectly for Brentford as they claimed a hugely significant win towards their promotion push.

Their goalkeeper David Raya, with his second such error in seven days, gifted Stoke’s Jacob Brown an opener just 27 seconds in and, truth be told, the Bees looked a pale imitation of their best in the first-half.

But they were a completely different proposition after the break and once Vitaly Janelt scored an inspired equaliser from 25 yards there was only one winner.

Jacob Brown gives Stoke a dream start at Brentford, pouncing after 27 seconds for the opener 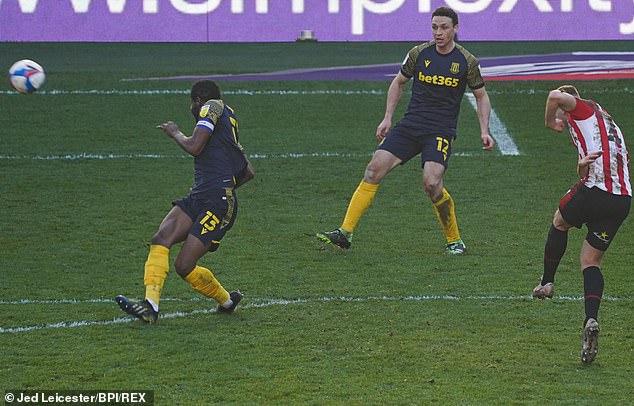 Vitaly Janelt equalises in style 11 minutes after the break, striking from long-range to make it 1-1

As so often this season, it was Ivan Toney who came up with the crucial intervention. The striker’s 25th goal of the season saw him in the right place as usual to turn home Bryan Mbeumo’s headed flick-on from a Henrik Dalsgaard cross.

It was an afternoon that could have gone horribly wrong for the Bees. They already knew that Watford had lost at Bournemouth, they wouldn’t have known about Swansea’s loss to Bristol City until afterwards.

With leaders Norwich not playing until Sunday, Brentford could only win to cut the gap to four points and put their feet up. They did just that and now there is breathing space again between them in second and Watford in third.

It also gave Thomas Frank’s team momentum ahead of their pivotal trip to Carrow Road on Wednesday. Had they lost to Stoke, who certainly made life difficult for them throughout, they could easily have slipped back. 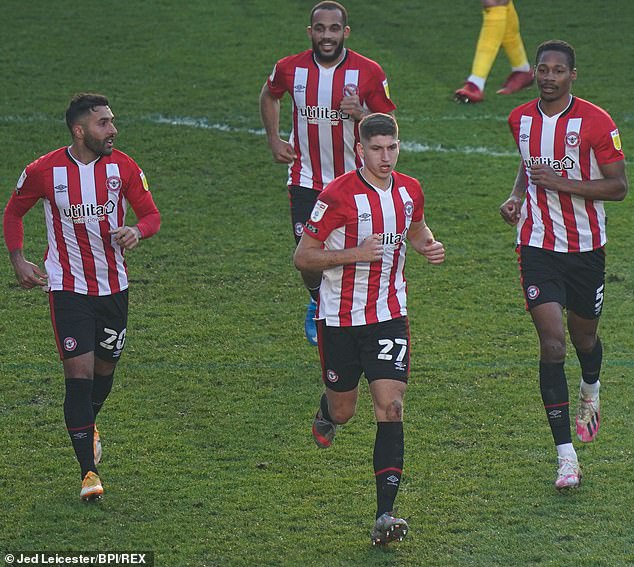 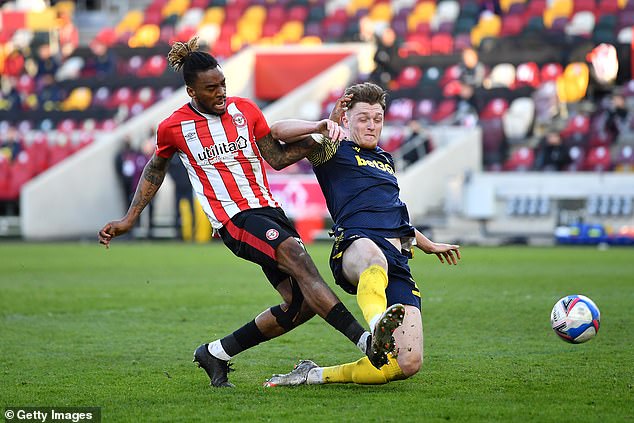 Brentford had been comfortable enough in beating strugglers Sheffield Wednesday 3-0 in midweek but Stoke were always going to be a tougher proposition.

Nonetheless, nobody expected the visitors to be in front with not even 30 seconds on the clock.

Just 27 seconds to be precise as Jacob Brown tapped home his first goal since early November following another moment Raya will want to forget as quickly as possible.

In Brentford’s 2-0 defeat at Coventry last Saturday, it was Raya’s loose pass out that was intercepted and resulted in Tyler Walker scoring the Sky Blues’ second.

This time, the Spaniard’s casualness came after Mads Bech Sorensen calmly tapped a left-side cross down to him under no pressure. 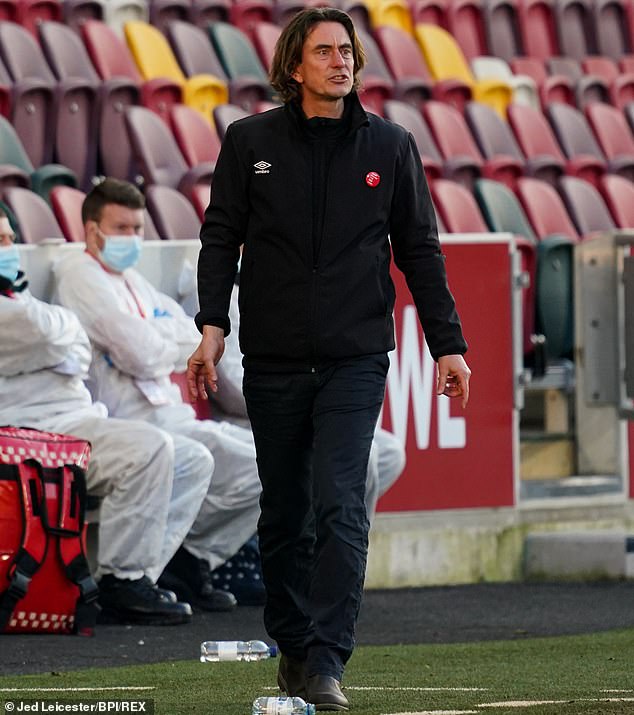 Seemingly unaware that Tommy Smith was lurking, Raya tried to pass the ball back to Sorensen on the corner of the penalty area. Smith read his mind, stole in to pinch the ball and cut back for Brown to score.

Judging by Brentford’s sluggish first-half that followed, the error left them collectively shell-shocked. They created next to nothing before half-time, not even exerting any meaningful pressure on a Stoke side who did more than simply sit back and absorb.

Chances were scarce but Raya did partially atone with a point-blank block to deny Nick Powell after James Chester’s outstretched leg touched him clear inside the Brentford box.

At the other end, Stoke keeper Angus Gunn spent a lot of time shielding his eyes from the low winter sun but that was all that troubled him before half-time.

Winston Reid powered a header over from a Saman Ghoddos corner but that was as encouraging as it got for a strangely subdued Brentford side.

They re-emerged with greater purpose and the leveller, when it came 11 minutes after the break, was special.

Tariqe Fosu did well to win the ball wide on the right and get it to Janelt on the edge of the Stoke box. The German midfielder shifted it onto his left foot and just let fly from 25 yards. It had power but also bend, rising past Gunn into the top corner.

Frank sought to press home the initiative by bringing on Sergi Canos and Matias Jensen. Canos was soon in a threatening position inside the Stoke box but unwisely opted to try and cross to Toney rather than shoot.

Gunn was required to touch over a rasping Ghoddos shot from 25 yards that might have been dipping in before Mbeumo sent over a wide free-kick after ignoring two unmarked team-mates on the edge of the box.

Stoke had barely got out of their own half but, with 17 minutes left, Jordan Cousins looped a header that bounced off the crossbar with Reid covering on the line. Janelt beat Brown to clear this rare second-half danger for Brentford.

But Toney was their match-winner yet again. It wasn’t his liveliest afternoon and most of the second-half was spent arguing with Stoke defender Harry Souttar.

Such is his flowing confidence, however, he typically needs just one chance and so it proved.