Captain James Tavernier and striker Kemar Roofe face weeks on the sidelines after pulling up in a 4-3 win over Royal Antwerp in the the first leg of the last 32 clash.

And Jack is now a major doubt for the return in Glasgow on Thursday after succumbing to pain after 27 minutes of a thumping 4-1 win over Dundee United.

Delighted by another four goal salvo, however, Steven Gerrard faces an anxious wait for the results of a scan on Jack, after the 28-year-old recently returned from a two month lay-off.

‘We’re hoping he has reported the injury before it’s become a bigger problem. 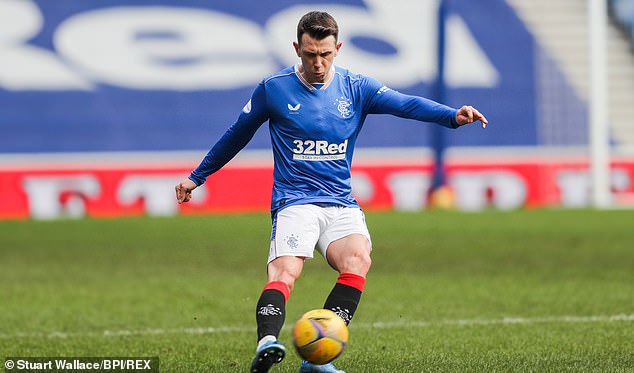 ‘He’s felt some tightness in the calf. But until we get a scan on it we won’t know the extent of it.

‘I’m disappointed to see him go off because he’s come back from the previous injury really bright.

‘Everyone knows how important he is to us.

‘Fingers crossed the outcome of that scan is positive rather than negative.’

Cautiously hopeful that injuries to captain Tavernier and striker Roofe sustained in Belgium may be less serious than first feared, the Rangers boss added: ‘James and Kemar will miss the next couple of weeks at least. It’s difficult to put an exact date on their return but they will certainly miss the next couple of weeks. All being well we should see them in two to three weeks.’ 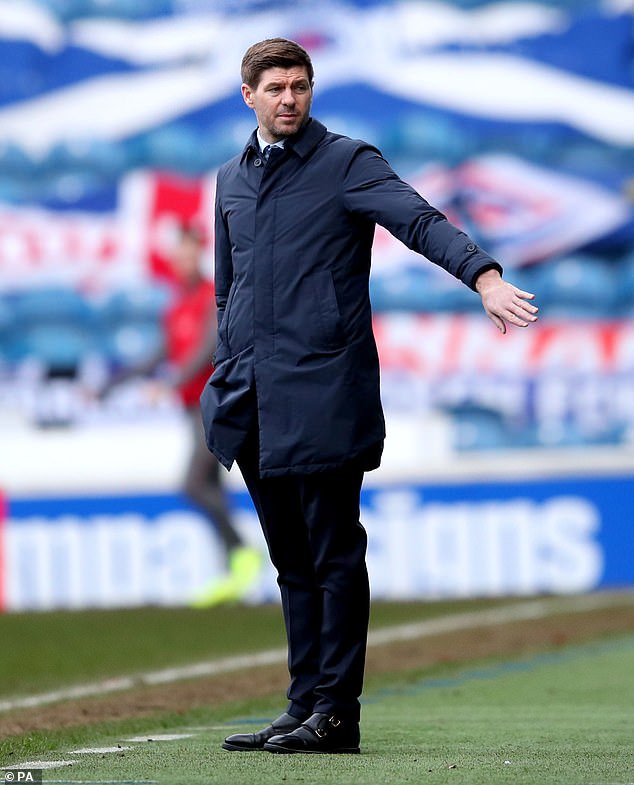 Delighted to see his side take another decisive step towards the title with their 15th win from 15 home games, the Rangers boss feared the exertions of Europe on Thursday night might catch up with his players.

‘I thought we were a bit slow out the blocks and we were second best for the first 20-25 minutes.

‘Credit to United they started the game bright and caused us all sorts of issues and Greegs had to bail us out.

‘But once we settled into the game and worked a few things out that United were trying to do, I thought we showed amazing quality to then go 4-0 up.

‘For large chunks of the game I was really pleased but the most important thing at this time of the year is results. 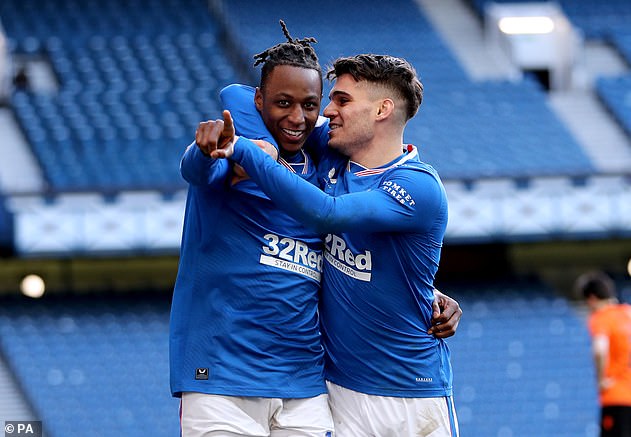 ‘We are at the business end of the season when it is all about results and for me it is all about getting wins on the board. But today we showed that we have got quality and people were taking shots on.’

Handing a late debut to new defender Jack Simpson, Gerrard warned the former Bournemouth centre-half of the need for patience.

Reluctant to even discuss winning the title for so long, the Liverpool legend admitted he is finally beginning to harbour thoughts of the finishing line.

‘I think it is normal to think, I don’t think there is any harm to think.

‘But the one thing I won’t do is get carried away too soon.

‘We very much realise where we are and the opportunity that we have got but the full focus and full attention turns to Thursday night now because we want to go and match last seasons achievement of going to the last 16 in Europe.

‘That is very important to us and then we have got a bit of a gap to Livingston away and we will move on to there. We have just got to finish the job off.

‘The games are there for us, the opportunity is there for us but the big reminder to myself, staff, players, supporters and anyone else that is covering us is that we have won nothing yet.’