Rangers roll onwards. Another test passed. Another game ticked off in this countdown towards a coronation that becomes ever more inevitable.

The winning goal from Alfredo Morelos early in the second half was thing of beauty. Constructed with careful passing and crafty flicks, it displayed the invention that is one of the hallmark of Steven Gerrard’s unbeaten Premiership leaders.

Morelos finished it with aplomb, but that wasn’t the only blow he struck against the Hibernian defence. 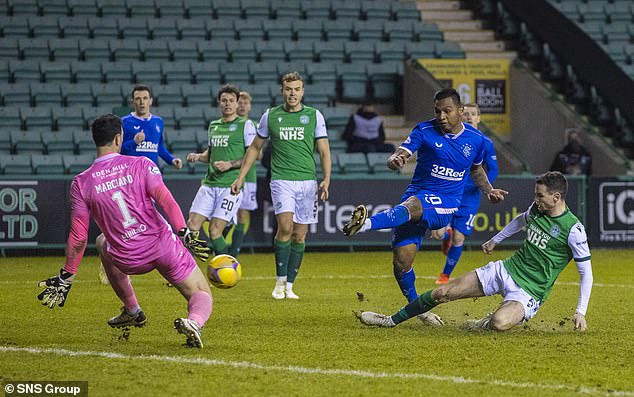 Accused of a first-half stamp on Ryan Porteous that was highlighted on television replays, the Ibrox striker avoided any action from referee Kevin Clancy. As former Rangers striker Kris Boyd admitted on Sky, it could easily have been a red card.

Morelos made sure to maximise that escape by inflicting the most painful form of damage on his hosts with an 11th goal of the season. Inevitably, though, there will now be a wait to see whether the SFA compliance officer deems any retrospective action necessary.

That controversy apart, this was another merited and win for Rangers – their 23rd from 26 Premiership games. It also brought Gerrard’s overall tally of victories up to 99.

A 23-point lead over Celtic was maintained – having played three games more – with another venue conquered. This success means Livingston’s Tony Macaroni Arena is now the only Premiership ground where the Ibrox side have not left with three points this term. 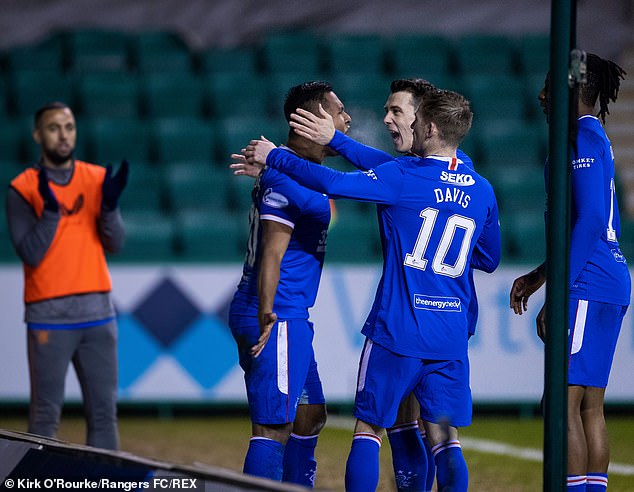 Rangers dominated sufficient chunks of play in Leith and had chances to score more, not least from Morelos. The little burst of on-field delight among their players at full-time underscored the importance of the the result.

Hibs manager Jack Ross had sought a response after their grim weekend BetFred Cup semi-final defeat to St Johnstone. It arrived, but only to an extent.

They weren’t swamped but never truly looked like being a team capable of ending Rangers’ unbeaten record. With just one win in their last seven games, Ross will have to look to Saturday’s meeting with Dundee United to try and rekindle positivity.

Certainly, Rangers were quickest out of the traps in the first half. A first-minute foul on Morelos on the right wing granted James Tavernier a chance to find his set-piece range. The right-back’s near-post free-kick picked out Connor Goldson for a header glanced across goal and wide. Goldson’s loud roar of frustration emphasised that it was a very presentable opportunity

Gerrard’s men enjoyed a decent amount of early control, thanks in part to a first start for Ryan Jack since November 22. 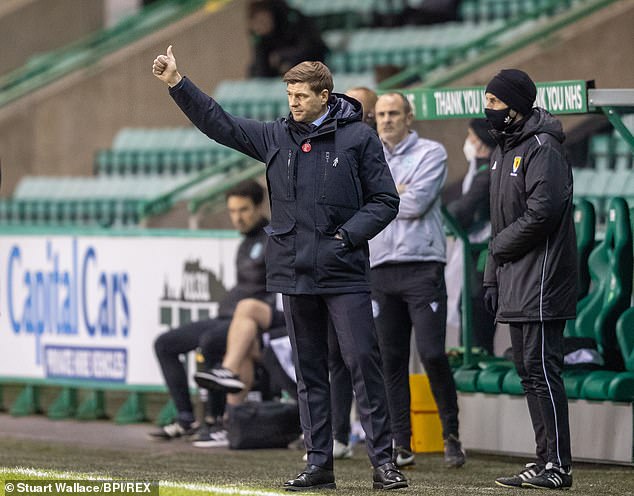 Absent for 14 games due to a knee injury, the midfielder’s return as a substitute against Ross County last Saturday was marked by a clinical finish to an outstanding team move. Joe Aribo was shifted one line forward in the formation to make space for Jack, while Ianis Hagi dropped to the bench.

Glen Kamara threatened to hurt Hibs on the break before he was cynically halted by Josh Doig. Hibs’ gifted young wing-back – a target for a number of English clubs ahead of Monday’s deadline – duly earned the game’s first booking from referee Kevin Clancy.

The Ibrox side didn’t have to wait too long before actually testing Ofir Marciano. Ryan Kent showed real intent to intercept a Melker Hallberg pass and prod the ball through for Aribo.

This initial dominance by Rangers didn’t endure. And they were lucky Clancy didn’t spot another needless infringement from Morelos.

Penalised for barging into Ryan Porteous, the striker brought his right foot down on his marker as he lay prone on the turf. Porteous let out a cry and several team-mates voiced their complaints towards Clancy. 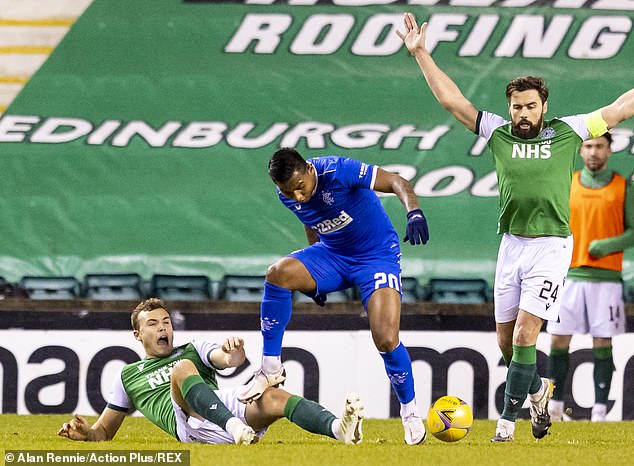 Ross had made three chances in the wake of that dismal Hampden performance. Out went captain Paul Hanlon, Martin Boyle and Jamie Murphy, who was unable to play against his parent club in any case. Darren McGregor took over both the armband and Hanlon’s place at centre-back, with Hallberg and Christian Doidge also introduced to the starting line-up.

The latter had Hibs’ first real chance on 17 minutes. Doig fizzed in a low, angled delivery from the left that Doidge met first time. McGregor, though, was equal to it.

The Rangers goalkeeper was less convincing when Chris Cadden tried his luck. Spilling the strike, McGregor couldn’t quite gather before Doidge nicked in to force the ball back for Jackson Irvine to blast over from around 10 yards. It was a glorious opening spurned by the Australian.

Now it was far more of an even contest. Kent dropped his shoulder to create space for a left-foot strike that was pulled wide. Then a Morelos drive was blocked by Porteous amid a crowded penalty area.

He would have his goal five minutes after the restart. Rangers re-emerged with a renewed tempo and incision, pinning the hosts back in their own territory.

When Kevin Nisbet lost the ball around the half-way, Hibs didn’t see the ball again before it was their net. Pass after pass was strung together with Morelos taking the ball wide on the right, shielding it from Porteous and feeding back into midfield. The Easter Road defender would pay a price for not following his man. 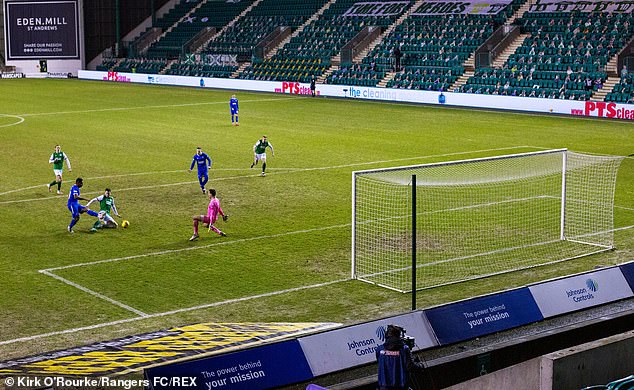 Jack passed forward to Davis. He touched it onto Aribo, whose flick put Morelos through with Porteous not in attendance. A left-foot finish beat Marciano to crown a super-slick move that showed the best side of the Colombian and this Rangers side as a whole.

Morelos could have had a second three minutes later. Kamara’s low cross eluded Aribo and bobbled up at the back post just before Morelos fired off target with a glaring miss.

Porteous was replaced by Hanlon midway through the half but not before a clash with Jack that brought a calming word from Clancy to both players. It was also an incident that saw views exchanged between the two technical areas.

Hibs needed something to change. Irvine went close from Hallberg corner but the visitors remained in the ascendancy. Kent picked out Morelos with an excellent pass, yet his attempted lob lacked conviction and was grabbed by Marciano.

That was a last opportunity for Morelos before he made way for fit-again Kemar Roofe on 72 minutes. As ever, it had been an eventful shift.

Kent and substitute Cedric Itten had chances at the end but Rangers didn’t need the comfort of a second goal.