Union Berlin fans gave blood to save their team from bankruptcy, now club are dreaming of Europe

When Union Berlin were promoted to the Bundesliga for the first time ever ahead of the 2019-2020 campaign, no one gave them a chance.

They were expected to shoot straight back down, finding playing against Germany’s big guns such as Bayern Munich, Borussia Dortmund and Co all too much.

But the club with such a turbulent history, which provides an intriguing backdrop to their rise, have defied the odds and after an 11th-place finish last year they have not stopped there.

Union Berlin have been the surprise package once again this season, and now find themselves in the lofty position of sixth with the chance to occupy the Champions League places come Wednesday night. They are quietly dreaming of their own crazy European adventure. 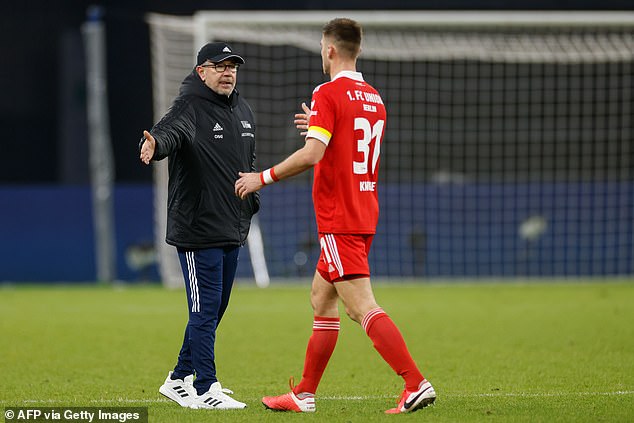 After promotion to the Bundesliga in 2019-2020, Urs Fischer’s side now find themselves sixth

Cedric Teuchert’s 88th-minute winner for Union last time out against Bayer Leverkusen has ensured his side have continued their incredible run.

Union are on a six-match unbeaten run, holding their own against Bayern and beating Dortmund during that time. But their hot streak has been made even more impressive by the absence of their top goalscorer and talismanic figure Max Kruse, who has missed their last six matches.

And astonishingly, only European champions Bayern (48) and Dortmund (33) have scored more goals than Berlin’s 32 – and Dortmund have played one game more.

Their meteoric rise is one of the biggest success stories within European football at the moment, and on Wednesday night they have the chance to make yet another statement along their remarkable journey.

Urs Fischer’s side travel to third-placed RB Leipzig on Wednesday looking to put a serious dent in their opponents’ Bundesliga title ambitions, while keeping their own dream alive. And they certainly travel to Leipzig in buoyant mood.

For Union fans watching on from home amid the ongoing Covid pandemic, they cannot believe what they are witnessing, and are somewhat in dreamland.

When you take a look through the history book of Union Berlin, their journey towards the top of the German summit is particularly hard to put into words.

Throughout their history, Union have always done things differently and it’s hard not to get goosebumps when describing their rise.

First, let’s take a close look at the history behind their stadium. The Stadion An der Alten Forsterei (Stadium at the Old Forester’s House), in the eastern Berlin neighbourhood of Kopenick, is a charming antidote to the soulless bowls most clubs now call home.

And intriguingly, three sides of the ground – which works out at 18,000 of 20,000 seats – remains terraced, allowing home fans to make quite the racket, which played an instrumental role in getting them to the Bundesliga for the first time in their steeped history. 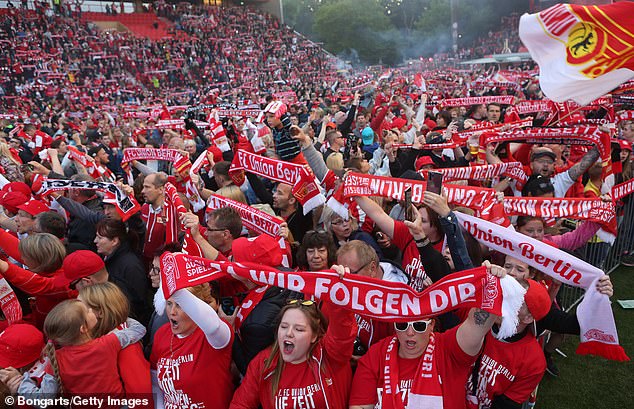 They have been without their fans for quite some time now, but it definitely doesn’t appear to have fazed their players.

But this is where it starts to get fascinating. Just 13 years ago, the club risked losing the stadium’s licence because of crumbling terraces, but their fans came together to save what they call home.

Some 1,600 supporters volunteered to graft away for an estimated 140,000 hours to get it back up to standard.

Reflecting on the club’s journey early on during their first ever Bundesliga campaign, German football journalist Jacob Sweetman gave an insight into just what exactly the club means for the fans.

‘Without the fans, this club is nothing,’ Sweetman told BBC’s Football Focus. ‘They bought themselves back from the brink and they rebuilt their own stadium. You can feel that when you go there. It belongs to them, not to anyone else.’

And if that hasn’t endeared you enough to the club, let’s take a look back four years earlier.

Their fans have always been there to help when they need it the most, and in 2004, with Union on the brink of bankruptcy the supporters came together to keep the club afloat.

With the club sliding perilously into the fourth division and needing about £1.5million to fend off bankruptcy, their supporters organised a campaign named ‘Bleed for Union’ where fans gave blood and forwarded the reimbursement to Union Berlin. 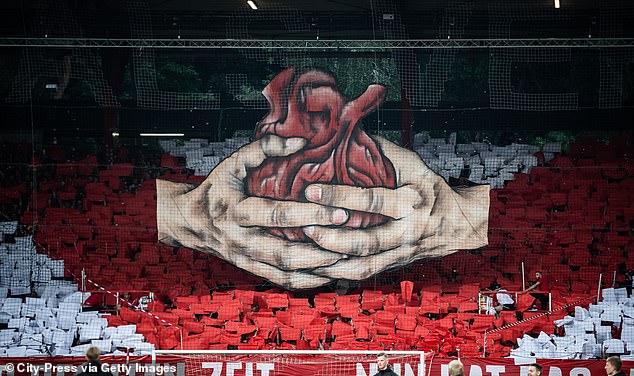 So when they sealed their promotion to the top-flight 15 years later, it came as no surprise that emotions were high for a club and fanbase that have been through everything down the years. From the depth of despair to the ultimate high, their time had now come.

Union Berlin had always been outsiders in Germany, but now they were sending shockwaves throughout the country.

But now let’s take a look back to the Cold War years, and another chapter that makes their rise to the top even that more compelling.

During the Cold War years, Union represented the antithesis of their city rivals Berliner FC Dynamo, the main club in the capital who had strong links to the Stasi, the East German state secret police.

So it came as no surprise that Dynamo knocked off 10 East German league championships in a row between 1979 and 1988, competing regularly in the European Cup.

They would often get dubious referee calls go in their favour and could poach all the best players in East Germany at the time.

As a result, a fierce cross-city rivalry developed with Union, with the vast terraces at the Stadion An der Alten Forsterei becoming a place where dissenters to the regime could express their views in relative anonymity. 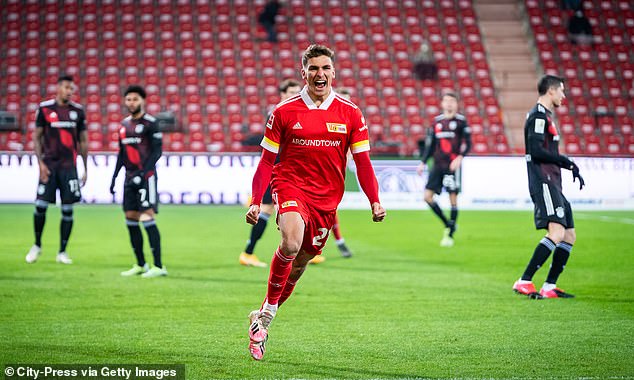 Union flitted between the top two divisions of the former East Germany and were never likely to challenge Dynamo, but became a symbol of resistance to the Stasi and the government to the point where even people with little interest in football came to their games.

They were unsurprisingly overlooked for the Bundesliga following the fall of the Berlin Wall and spent the nineties in the third division.

So it has never ever been an easy ride for Union, and they’ve always had to do it the hard way, but there had been some highlights down the years.

During the 2000-2001 campaign, Union made it through to the German Cup final, losing 2-0 to Schalke across town at the Olympiastadion just years before they almost went bust after plummeting into the fourth division.

However, Union have never thrown in the towel and have continuously hauled themselves out of the mud.

Just 17 years on from their gravest day, Union now find themselves mixing it with Germany’s big guns – something which appeared beyond their wildest dreams not so long ago. 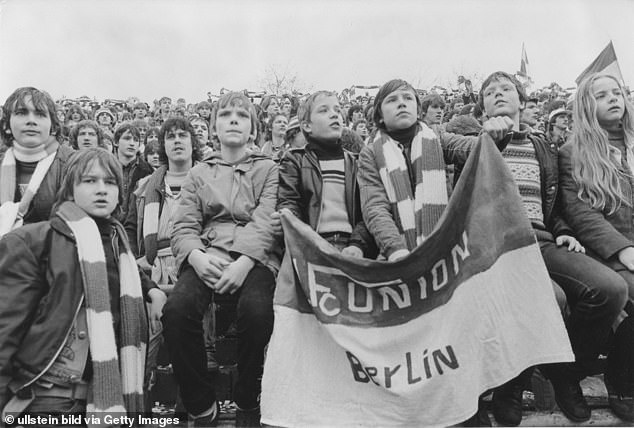 It’s Leipzig next for the Berlin outfit, but while they will be coming up against a side that reached the quarter-finals of last season’s Champions League, they certainly won’t play with any fear.

If they were to walk away with all three points tonight, Fischer’s side would move up to fourth in the Bundesliga above Bayern’s supposed biggest threat in Dortmund.

Yes there is definitely a long way to go in the German season, and yes there will be plenty of ups and downs on the journey, but Union fans can’t help but dream.

After sealing promotion to the Bundesliga after a play-off victory over Stuttgart, the final whistle sparked a mass pitch invasion from Union’s fans. They had made the big time.

With the Covid crisis keeping fans out of stadiums in Germany, it’s impossible not to imaging the emotional scenes that would have greeted Union’s heroes for placing the club firmly on Europe’s radar.