Charlton are hoping to steal a march in the race for Exeter starlet Joel Randall.

Randall is also wanted by Swansea and Celtic but the south Londoners have lined up an opening move worth in the region of £300,000 for the exciting attacker.

The 21-year-old, who can play on both flanks and also centrally, has been Exeter’s star performer this season, scoring eight goals and setting up five more in 26 games.

Charlton have lined up an opening bid of £300,000 for talented Exeter attacker Joel Randall

Charlton’s first approach is expected to be knocked back but they are willing to test Exeter’s resolve with an improved offer for the wide man whose contract expires next year.

Though whether they can make a bid big enough to tempt Exeter remains to be seen with the League Two side hoping to secure a fee in the region of £1m.

Exeter are also hoping to keep hold of Randall this month with only an offer that is too good to turn down likely to change their minds.

Randall is latest Exeter produced player who is tipped for big things after Matt Grimes, Ollie Watkins and Ethan Ampadu. 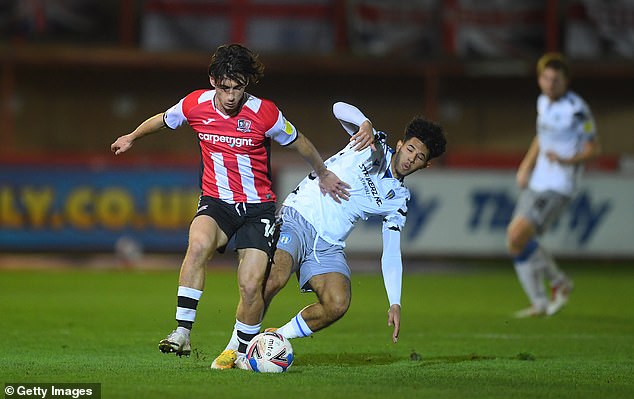 He is rated as a Premier League player in the making who some at the St James Park club feel is capable of surpassing them all.

Manager Matt Taylor said earlier this month: ‘I’d be surprised if he is not on a lot of big club’s lists, in terms of recruitment, but I think this window especially will be slightly different to other ones in relation to where the pandemic has put the football world and less money being around.

‘We are always open to bids for our players, but we have a valuation for Joel that we certainly want to get towards.

‘Joel has played 18 league games and as well as he has played in those games, we want him to move on when he has played 50, 60 possibly 100 games because he will be a better player for when he moves at that time.

‘It’s exciting times for young players at our club.

‘It’s exciting times for Joel Randall because they are going to be in demand, but they all have a price and a valuation, but they also have a job to do and Joel’s job first and foremost is to win games of football for Exeter City.’