Valencia have made a second loan bid to sign Harry Winks from Tottenham.

The struggling LaLiga side had their first bid rejected, amid claims from Jose Mourinho there was ‘no chance’ the central midfielder would leave.

But journalist Guillem Balague claimed on Twitter that Valencia would make a second attempt to lure Winks to eastern Spain – though a deal at present looks unlikely.

Valencia are reportedly willing to pay all of his wages, but Spurs’ insistence on receiving a large loan fee is currently scuppering the prospective switch.

Tottenham also want to exclude an option or obligation to buy in any temporary move away.

The ten-cap England international is currently out of favour in north London, only making seven Premier League appearances so far this season.

PIerre-Emile Hojbjerg, the reinvigorated Tanguy Ndombele and Giovani Lo Celso have generally been preferred in midfield, and Winks is keen to increase his playing time before the delayed European Championship tournament this summer.

Valencia boss Javi Gracia is a fan of the 24-year-old having seen him up close during his spell as Watford manager, and wants him to beef up their depleted squad after a fire sale last year.

Spurs boss Mourinho said: ‘In relation to Winks on loan in January, no way. He came to me. Not just him, many players come to me. 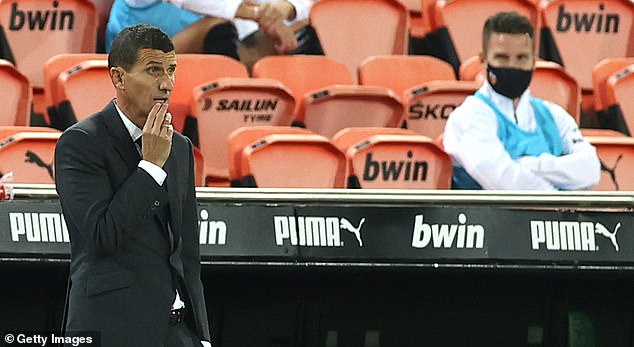 Former Watford boss Javi Gracia has been a fan of Winks, 24, since his time in English football

Gracia’s side currently lie in 14th in the table, just three points off 18th-placed Elche in the relegation zone after a 1-0 victory against Valladolid on Sunday.

They travel to Alcorcon in the Copa del Rey next Sunday before hosting Osasuna the following Thursday.