Top Sport News
Real Madrid have ‘no optimism’ about Sergio Ramos staying at the Bernabeu...
Eric Garcia ‘ready not to be paid a salary until the end...
Gilmour wants a loan move away from Chelsea to boost Scotland chances...
Mason Greenwood grafted hard against Sheffield United but is still a work...
Celtic 2-0 Hamilton: Leigh Griffiths and Odsonne Edouard strike for hosts
Jack Wilshere reveals his children spurred him on to revive career
Hibernian 0-1 Rangers: Steven Gerrard’s side march on
Roma are ‘monitoring Chelsea striker Olivier Giroud’ with Edin Dzeko set to...
Romelu Lukaku vs Zlatan Ibrahimovic: The fight to be ‘King of Milan’...
Former Crystal Palace midfielder Max Meyer completes Cologne move
Home Championship EFL footballers testing positive for Covid 50 per cent more than public and told, ‘stop hugging’
Championship

Football clubs have been warned they must do more to prevent the spread of Covid after new figures appeared to show players and staff are more likely to catch the virus than people in the general population.

The equivalent figure for the Premier League, where 40 players and staff tested positive out of 2,295 tests, is 1.7 per cent.

In comparison, a mass public testing scheme by the Office for National Statistics involves more than 60,000 randomly allocated tests per week and, for the week ending January 2, it recorded an infection rate of just 2.06 per cent.

The result for the EFL is surprising, given the protected environment in which footballers work, and raises questions about how rigorously clubs are enforcing Covid protocols.

However, the overall rates of infection are not the problem, according to Professor Keith Neal, an expert in public health at the University of Nottingham.

He says people in the age group 18-35 – who often work in football clubs – are more likely to catch the virus. Infection rates in this group are around 3 per cent. 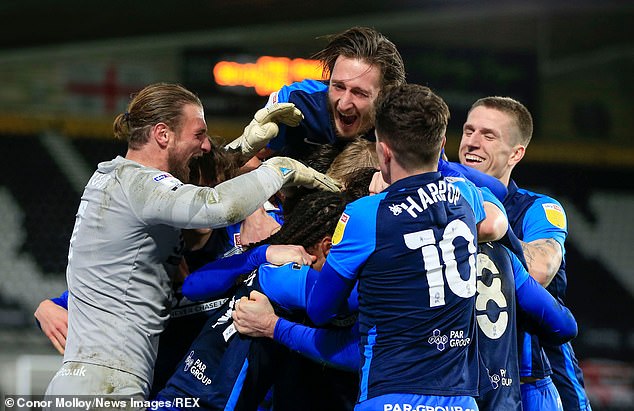 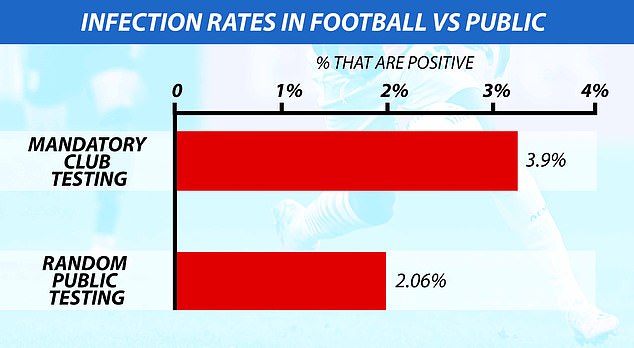 In addition, the EFL points out that with some clubs accounting for a significant number of cases, the infection rate in many teams will be lower than the overall figure.

Rather, it is the occurrence of large outbreaks at individual clubs and the possibility of transmission of the new mutant strain of the virus, which is much more infectious, on match days that causes concern.

‘Quite clearly large outbreaks in clubs indicates a potential problem and lessons need to be learned,’ said Professor Neal.

‘In some clubs there has been transmission, which reflects a problem with the protocols.’

The EFL figures include 35 cases at just three clubs. 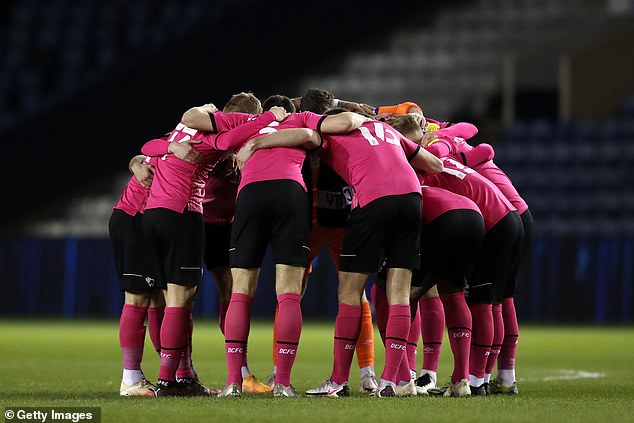 ‘Players should not be having that degree of contact,’ he said. ‘If they are doing that it’s hardly surprising there are outbreaks.

‘The only people players should be cuddling are their WAGs [wives and girlfriends] or their children.

‘Only cuddle people in your own household. Definitely not team-mates. There is no need to cuddle each other.’ 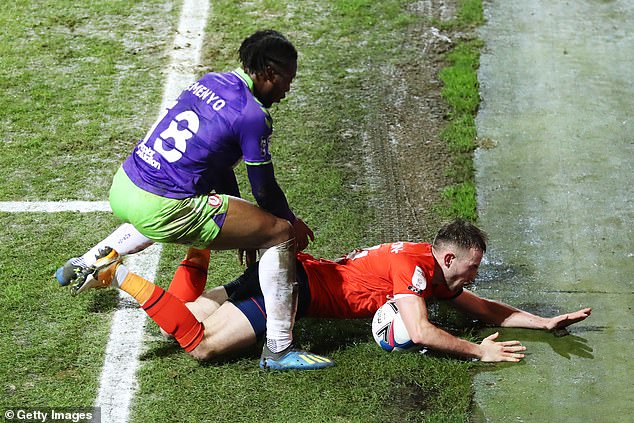 Gordon Taylor, the chief executive of the PFA warned players on Thursday to stop hugging when celebrating goals.

Another area of potential concern is the number of cases where clubs have played each other and then both teams have reported new infections.

‘Further investigation on whether clubs are passing it to each other is warranted,’ added Professor Neal.

‘The actual game itself has such limited contact within one metre it is very unlikely that it is the source of spread, but it is worth looking at the whole matchday.’ 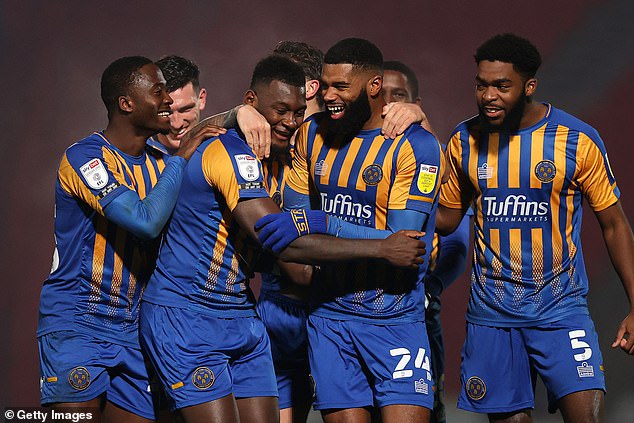 He said travel to games, indoor spaces including changing rooms and interacting with the opposition before or after matches are likely to be critical factors.

In recent weeks, Luton Town and Bristol City, Sheffield Wednesday and Derby, Portsmouth and Hull and Doncaster and Shrewsbury have all reported Covid cases after playing each other.

League One Ipswich Town and Shrewsbury Town have said they believe players are picking up the virus on match days.

Shrewsbury chief executive Brian Caldwell is concerned about the ease with which the new strain of the virus appears to transmit between players and he is worried clubs, including his own, could inadvertently pass it on. 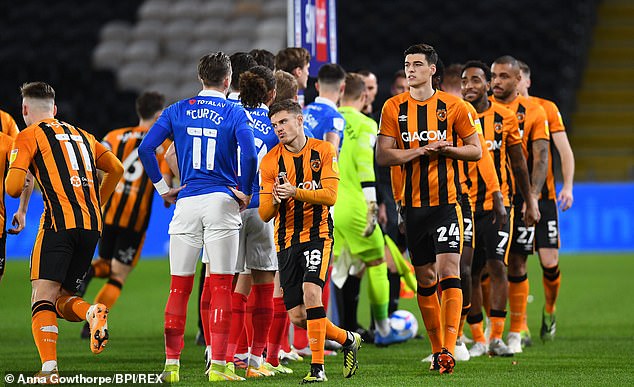 ‘The results [of testing] were quite astronomical if I am honest – we were all concerned,’ said Caldwell after the postponement of his club’s third-round FA Cup tie against Southampton.

Shrewsbury have been working closely with Shropshire Public Health to manage the outbreak and have closed their training ground for 10 days.

‘We look at the teams we have played in the last few weeks who have then gone down with Covid whether it has been imeediately after the game or days afterward,’ added Caldwell.

‘There is no doubt this new strain is so much more transmissable that the previous one. 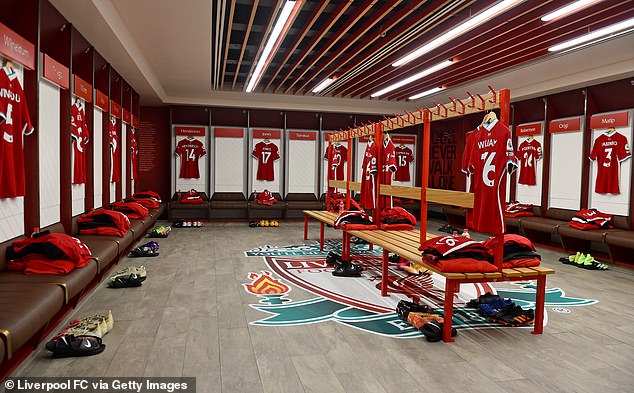 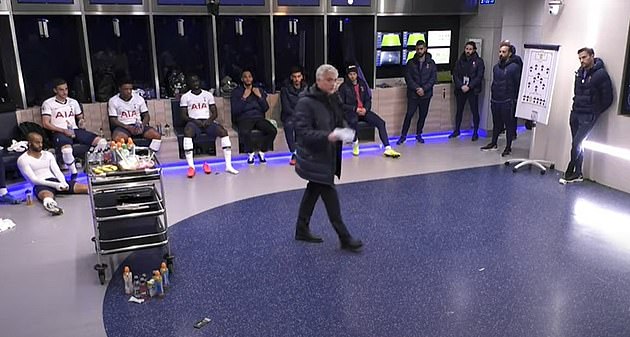 There are concerns the new protocol could bring the Premier League’s integrity into question (Pictured: Jose Mourinho and his Tottenham players in the dressing room in 2019-20 season)

‘My personal view is we probably got it from somewhere else playing matches and then it just seems to have a knock on effect and then we play a match and we potentially pass it on to someone else.’

The Premier League and EFL are both taking steps to tighten protocols and limit the spread of Covid within and between clubs.

As revealed by Sportsmail, the top tier has told compliance officers to rigorously enforce the rules and even sanctioned them to enter changing rooms to ensure they are being adhered to. 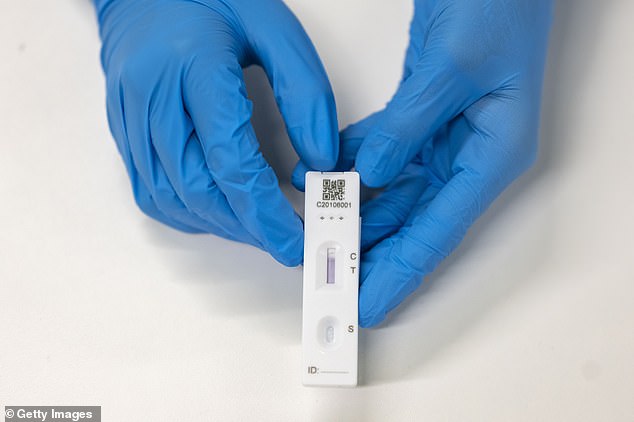 Meanwhile, the EFL has beefed up its protocols, with players told they cannot have showers after training unless they live more than an hour away – they must turn up and leave in their kit and access to indoor areas is restricted.

In addition, EFL clubs will begin twice weekly testing for Covid next week.

The tests will use lateral flow devices which are less accurate than the PCR tests in use in the Premier League and used for the mandatory tests undertaken in the EFL this week.

While less accurate, lateral flow tests are cheaper and much quicker to administer. The £5m cost of the tests is being covered by the PFA.

The EFL’s Covid test results come amid growing pressure to suspend football, fuelled by the number of virus outbreaks at clubs and the the actions of high-profile players who have ignored Covid restrictions and attended or organised parties during the festive period.

However, the EFL insists a suspension of matches is not on the agenda and the results vindicate their approach.

In a statement, the EFL’s Medical Advisors Dr Richard Higgins and Dr Subhashis Basu said the infection rate in the clubs reflects the spread of the new variant of Covid nationwide.

‘The low reported numbers across the overwhelming majority of clubs means we remain confident that our protocols continue to mitigate against the spread of infection as intended.’