For Rangers, this was a landmark victory founded on all the reserves of resilience they have developed in the Europa League under Steven Gerrard’s command.

The club’s 150th victory in continental qualification duly secured qualification for the last 32 with a game to spare. For a second successive season, European football will return to Ibrox after Christmas.

That excellent achievement cannot be downplayed. And it may actually have felt all the sweeter for the uncertainty they endured in this meeting with a sprightly Standard Liege outfit vainly fighting to keep their own hopes alive.

Twice behind, Gerrard’s side were second-best in terms of performance levels for much of the opening hour. On the balance of play, they were fortunate that a set-piece – headed home by Connor Goldson – and a penalty – tucked away by James Tavernier for his 15th goal of the season – had them level at the break.

But belief exudes from Rangers this term. They no longer need to hit their 90-minute maximum to get the job done. And there was much to admire in the way they dug deep to completely flip the match on its head and ensure they progressed alongside Benfica.

The winning goal after 62 minutes was a lovely thing. Scored by Scott Arfield, who also netted against Galatastasary to book a place in the group stage, it was like a punch to the gut for their visitors. Rangers were actually unfortunate not to extend their lead by the final whistle as the chances racked up.

It means the only significance of next week’s trip to meet Lech Poznan is whether they end up as group winners or not. A financial bonus comes with that prize but the heavy lifting has already been done. 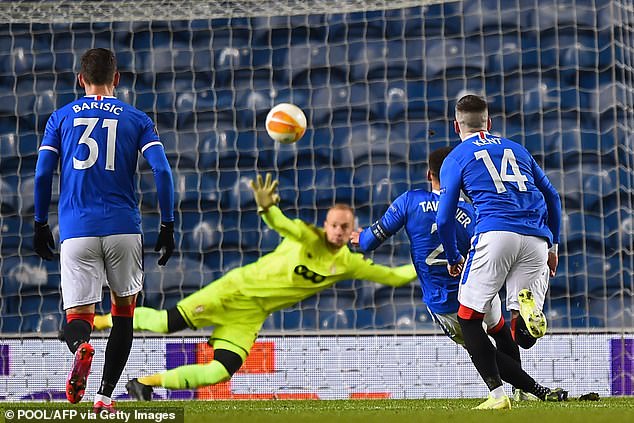 With away Premiership matches against Ross County and Dundee United on the next two Sundays, Gerrard has a opportunity to further rotate his squad if needed. That comfort counts as yet another sign of the progress being made at Ibrox.

Now unbeaten in 24 games, the defensive lapses here would have frustrated Allan McGregor on the night he surpassed Barry Ferguson’s European appearance record for the club. Again, though, the veteran goalkeeper can live with that when the wider objective was achieved.

There was little surprise in how Gerrard set about the task. Reverting to the same side that had drawn 2-2 with Benfica meant seven changes from the weekend cruise past Falkirk. Tavernier, Goldson, Borna Barisic and Arfield – an indispensable quartet for Rangers this season – were the only players to double up.

The permutations were simple. Repeat the win over Liege on matchday one and a place in the last 32 was secure. A draw would mean relying on Benfica to defeat Poznan.

It felt like an evening rich with promise. But then came the sixth minute.

Rangers are usually able to rely on the solidity of their structure to grow into a game. Not so here. 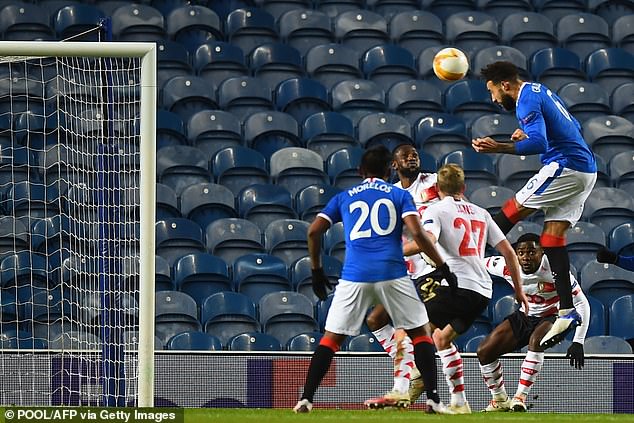 A long pass out of defence was flicked on first time to take Tavernier out of the game. Goldson was pulled across to the empty space but could prevent Duje Cop from whipping in a low cross.

Barisic was caught cold as Maxime Lestienne made an intelligent, quicksilver run right across the penalty area from the opposite side. It gave him the opportunity to connect with a finish that gave McGregor not a hope. There would be no 31st European clean sheet.

Standard continued to look the more threatening. The attacking movement of Cop and Lestienne was asking questions. At the opposite end, Merveille Bokadi was bold in stepping forward from centre-back to offer passing options.

Rangers found themselves in the rare situation of facing an opponent who looked more energised and organised than they were. The discomfort was audible. As the Belgians buzzed around with purpose, Goldson bellowed at his colleagues to quell the danger at source. 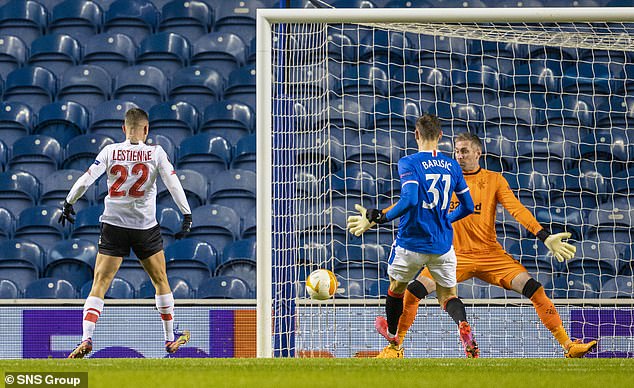 His ire would not have been soothed by a lax header from centre-back partner Leon Balogun. It dropped for Abdoul-Fessal Tapsoba around 22 yards from goal. Mercifully for Balogun, the young striker from Burkina Faso was wayward with his drive.

News of Benfica taking the lead in Lisbon meant Rangers were potentially a goal away from progression. And, almost from nowhere, they levelled after 39 minutes.

Collins Fai was forced to block Barisic and concede a corner. The Croatian delivered and Goldson towered to plant a majestic header.

Incredibly, Gerrard’s men would lose and regain parity before the break. Standard claimed a 2-1 lead when Rangers were caught by a quick free-kick.

Glen Kamara was slow to close down Fai as he gathered on the right to delivered a brilliant cross from the right. It bounced beyond the outstretched foot of Balogun and Cop converted via his thigh before colliding against the post with sickening force. 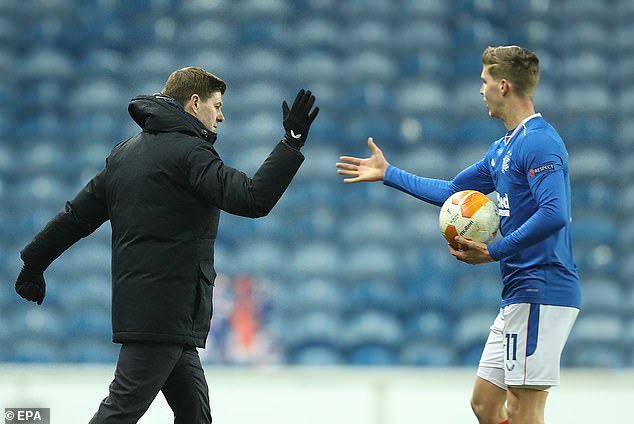 He returned to the pitch after treatment. Just in time to add his voice to the Standard protests that greeted a second Rangers leveller in the final minute of the half.

Kemar Roofe struck a shot that struck the hand of Lestienne at close range. Swedish referee Bojan Pandzic initially signalled for a corner before changing his mind after a word in his earpiece. The Belgians were incensed when he pointed to the spot, but such are the new rules.

Tavernier stepped up to thump home the award with confidence. That’s nine out of nine penalties for the Ibrox captain this season.

You wondered if it would give Rangers a platform for control in the second period. Initially, that hope went unanswered. Laurent Jans was too strong in midfield for Scott Arfield and dabbed a pass behind Connor Goldson for Tapsoba to chase. McGregor got out well to deny him at the near post.

Then, on 62 minutes, the Ibrox men clicked. And how. Arfield was involved at the genesis of a fluent move that saw Barisic knock it inside for Kamara. The Finn threaded it on to Kent, who darted inside the area before getting his head up to pick out a perfect cut-back for Arfield. An unerring right-foot finish put Standard behind for the first time.

From there, Rangers were suddenly comfortable. Barisic saw a brilliant free-kick tipped onto the bar by Arnaud Bodart before a Goldson header received similar treatment.

Roofe then broke clear but, with Kent calling for it to be squared, struck straight at the keeper. It didn’t matter. Rangers had done everything they needed.