This was a classic lesson in the importance of converting periods of domination into goals. Queens Park Rangers controlled the majority of the first-half here, creating a hatful of chances, but scored just once when they might have had three or four.

As a result they were ambushed by Bristol City and goals by Nahki Wells and Adam Nagy either side of the interval lifted them within a point of the Championship summit.

Though Rangers took an early lead thanks to Rob Dickie’s powerful header, their profligacy ultimately explains why they can be located in the lower reaches of the table when they have the potential to be much higher.

That Wells got on the scoresheet against his former club was just typical from a QPR perspective and it seems that every small run of positive results must always be followed by setbacks.

City are more consistent and though they scarcely deserved all three points here, it appears more and more likely with every passing week they will be in the promotion shake-up.

Sides with true ambitions of making the Premier League pull off smash and grab raids like this when second best and then have the gumption to defend resolutely, absorb the pressure and see out the win.

Both teams had something to prove after disappointing results over the weekend. QPR came away from west London rivals Brentford ruing a red card that wasn’t given and left Mark Warburton incensed, while City were poor defensively in going down 3-1 at Reading. 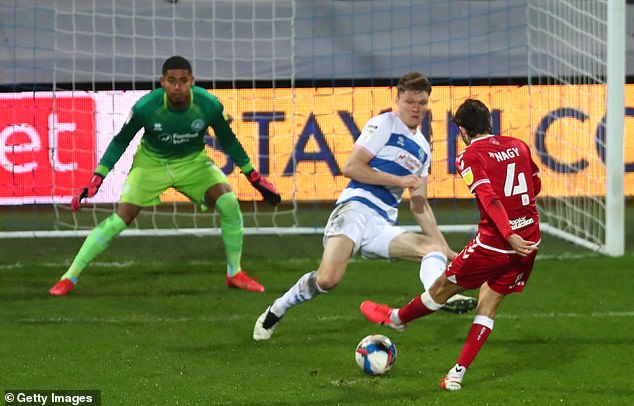 It was the visitors who had the game’s first chance, snapping into action when Nagy nodded the ball into Chris Martin, who returned the ball sharply. Nagy should have done better, his shot bobbling across the goalmouth and wide.

From then on, Rangers controlled great big swathes of the first-half and rightly wondered how they didn’t go in at half-time with a considerable advantage.

Yoann Barbet popped a long ball forward over the top that Bright Osayi-Samuel sprinted on to. He controlled neatly but was pushed too wide and Daniel Bentley was able to save his eventual shot.

But the hosts, who’ll be able to welcome up to 2,000 fans into the Kiyan Prince Foundation Stadium for their next home game against Reading on December 12, were soon in front.

A short corner routine led to Chris Willock dinking in a left-footed cross and there was Dickie, breaking clear of defensive attentions, to thump his header past Bentley and score a first goal for the club following a summer move from Oxford United. 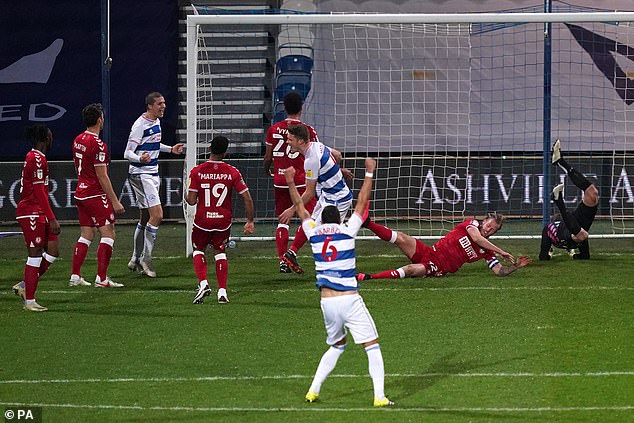 Rangers continued to push forward in search of further goals. Their greatest joy came down the right, with Osman Kakay a more than willing support to Osayi-Samuel on the overlap, not to mention forward darts of his own.

Both gave City left-back Jay Dasilva a torrid time, with Osayi-Samuel spinning away at one point to cut in towards goal before Bentley blocked at his near post.

Tom Carroll saw an effort deflected over by Nagy and from the resulting corner, Willock saw a shot cleared off the line by Adrian Mariappa.

A second goal seemed inevitable but Ilias Chair slammed a low shot wide of the post after more excellent build-up work down the right by Osayi-Samuel.

But if Rangers were more clinical in front of goal, they’d be much higher in the standings than mid-table.

They would be stung five minutes before half-time by the law of the ex.

Wells won’t score many simpler goals in his career, left alone at the back stick to tap home from barely a yard after Callum O’Dowda’s deflected cross found its way across the six-yard box.

Wells had the good grace not to celebrate against the team for whom he scored 24 goals during a season-and-a-half on loan from Burnley. 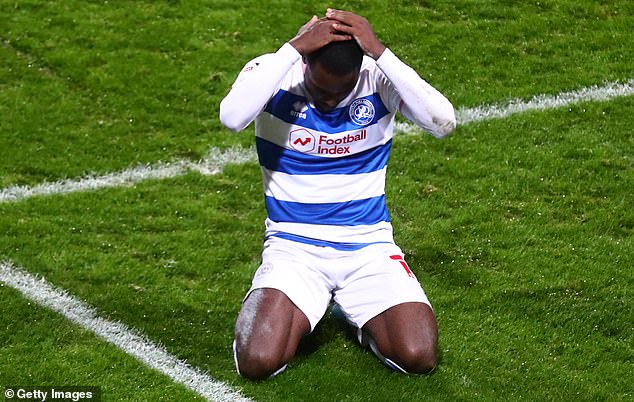 And it got even better for City five minutes after the break. Dickie was the man at fault, sloppily losing the ball and allowing O’Dowda to nick it past him and run after it.

His cross was met by a Wells touch and fell nicely for Nagy, roaring into the QPR area and he nudged the ball left into a shooting position before rifling into the bottom corner.

Dasilva had been put out of his misery at half-time and his replacement Tommy Rowe get a much firmer grip on Osayi-Samuel and Kakay. Rangers huffed and puffed but the chances dried up.

Down the other end, Wells led a breakaway following a Bentley punch from a corner, teeing up the onrushing Nagy whose shot cleared the bar. As we entered the final 20 minutes, Antoine Semenyo lashed a shot wide after good work by Martin.

But QPR found a second wind and a more direct approach led to a great chance for substitute Macauley Bonne, who somehow came out on top in an aerial duel with two City defenders but saw his effort dribble agonisingly across the goalmouth.

Dean Holden removed Wells for the security of an extra defender as Rangers prepared a late siege. Kakay saw a shot deflected over and Rowe took an Albert Adomah shot in the face.

And there was one last golden chance deep into stoppage time as Osayi-Samuel found the energy to burst into the City box only to shoot wide. The missed chance summed up their evening nicely.