Falkirk 0-4 Rangers: Calvin Bassey scores his first for the club

Falkirk 0-4 Rangers: Calvin Bassey scores his first for the club as Steven Gerrard’s team cruise into the Betfred Cup quarter-finals

Calvin Bassey scored his first Rangers goal as Steven Gerrard’s team cruised into the Betfred Cup quarter-finals with a 4-0 win over Falkirk.

The summer signing from Leicester was recruited to offer cover for Borna Barisic at left-back but took his chance to open his account after being tested out at centre-back.

Jermain Defoe got Rangers up and running early before Bassey pounced from close-range on the half-hour mark. 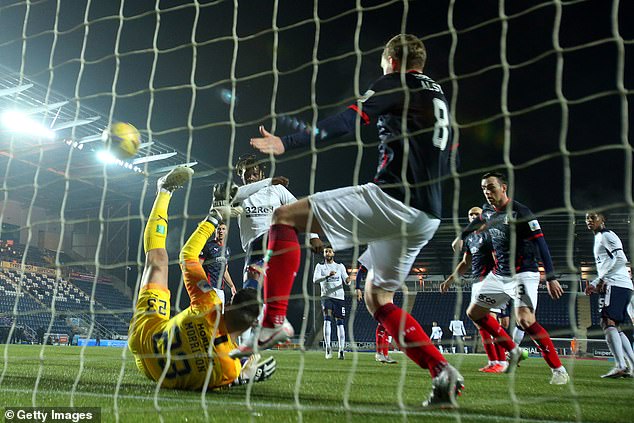 Barisic swept home his latest free-kick just before half-time, before captain James Tavernier continued his red-hot scoring streak to cap a win which moves the Light Blues into the last eight.

And with Celtic out of the competition, Gerrard – whose unbeaten side have now clocked up 18 clean sheets this season – will believe the path has been cleared for his side to go on and finally claim the Ibrox side’s first major trophy since 2011.

Rangers made seven changes to the team who threw away a two-goal lead to draw with Benfica on Thursday night as only Barisic, Tavernier, Connor Goldson and Scott Arfield kept their places.

Bassey was given his chance in the centre of defence after Filip Helander was ruled out following a positive coronavirus test, while Bongani Zungu came in for his first start.

The Bairns find themselves in League One these days but had plenty of top-flight experience with the likes of Blair Alston – who was part of the Hamilton side who became the last Scottish team to defeat Rangers in March – Paul Dixon, Sean Kelly, Morgaro Gomis and Connor Sammon in their line-up.

Mark Durnan is another who has tasted life in the Premiership but it was schoolboy stuff from the former Dundee United centre-back as he allowed Goldson’s 40-yard pass to sail over his head and find Defoe six minutes in.

The angle looked to be against the 38-year-old as he allowed the ball to run across his chest but he still managed to find a route past Falkirk keeper Peter Morrison, arrowing the ball in off the far post.

It was a stunning finish but his next attempt sailed wide as the former England poacher volleyed wide from Cedric Itten’s knockdown.

Gers lost Brandon Barker to injury midway through the first half but the introduction of Glen Kamara only made them stronger and they doubled their lead after 30 minutes.

Tavernier had forced Morrison into conceding a corner as he took aim from the right-hand side of the box. The keeper got hands on the ball again as Itten met Barisic’s delivery but pushed it straight to Bassey, who rammed home from three yards out. 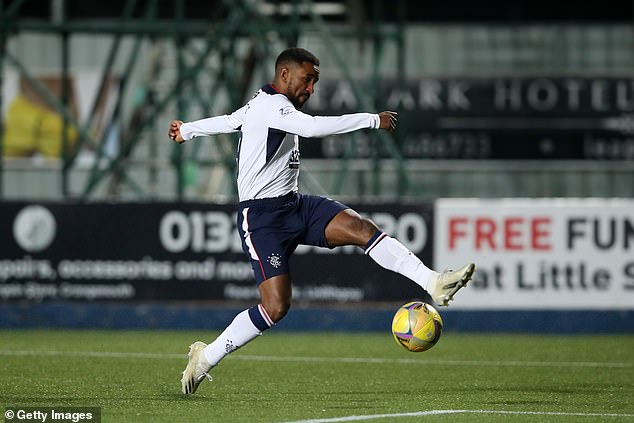 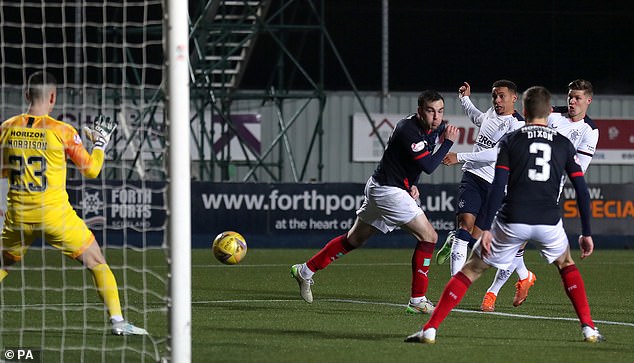 To credit Falkirk co-managers David McCracken and Lee Miller, their team showed more intent than many of the sides Rangers have faced this term – and they almost pulled a goal back when Durnan climbed above Bassey to meet Alston’s corner but Jon McLaughlin was untroubled as he pushed the ball behind.

And it was game over on 42 minutes. Gomis’ trip on Itten handed Barisic a set-piece opportunity which the Croatian executed to perfection as he whipped the ball over the wall and past Morrison’s fingertips for Rangers’ third goal.

Bassey got lucky 30 seconds into the second half when Sammon read his backpass, only just failing to rob McLaughlin to leave an empty net.

But it was the visitors who were celebrating again four minutes later as Barisic picked out Tavernier, racing in at the back post, for the skipper to lash home his 14th goal of the season with a fierce first-time hit.

With progress secured, Gerrard was able to hand a debut to 18-year-old Ciaran Dickson and give Glenn Middleton his first Gers appearance since April 2019.

There was also a run-out for an even younger academy prospect, 16-year-old Leon King, as Tavernier was given a rest in the final 20 minutes.

‘He looked like the player we all want to see’: Ronald Koeman heaps praise on Antoine Griezmann