CHAMPIONSHIP ROUND-UP: Coventry deny leaders Norwich with a late goal, as Bournemouth miss out on the chance to go top against Rotherham

Mario Vrancic appeared to have Daniel Farke’s Canaries on course for victory in the 27th minute, scoring from the penalty spot after goalkeeper Ben Wilson had been penalised for fouling Przemyslaw Placheta.

Bournemouth, also targeting a return to the Premier League at the first attempt, missed out on the chance to take over at the top as they were held 2-2 at Rotherham.

Junior Stanislas’ 20th minute penalty had the visitors ahead, but Freddie Ladapo’s double turned things around, only for Dominic Solanke – fouled for the earlier penalty – to equalise in the 63rd minute.

Watford, the third team to fall out of the top tier last season, capitalised with a 4-1 win over Preston which lifted them up to third. 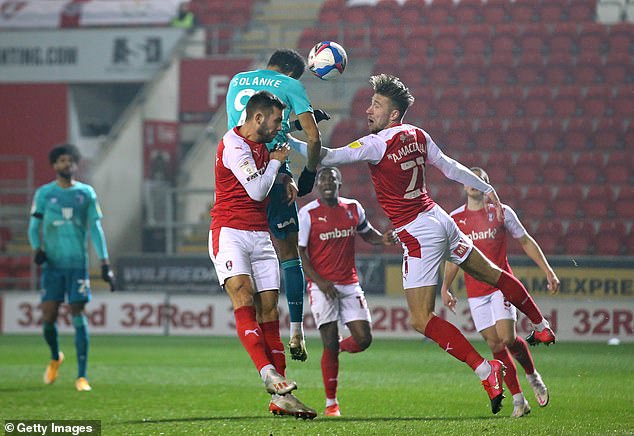 Dominic Solanke made it 2-2 with half an hour to go, but Bournemouth couldn’t find a winner

Domingos Quina converted Jeremy Ngakia’s cross in the ninth minute, then Troy Deeney doubled the advantage from the spot within seven minutes of the restart.

The visitors were back in the game within three minutes with a deflected shot from outside the area from Tom Barkhuizen but Nathaniel Chalobah (58) and Joao Pedro (74) ended the visitors’ hopes.

Middlesbrough slipped up, going down 3-2 to Huddersfield in West Yorkshire.

Marvin Johnson’s low shot gave the visitors a 14th-minute lead but Carel Eiting levelled eight minutes before the interval and Fraizer Campbell netted just before the break with a scuffed shot after good work by Lewis O’Brien.

Britt Assombalonga appeared to have earned Boro a point, blasting in an 83rd-minute penalty after he had been fouled – but Josh Koroma’s 85th minute goal won it for the hosts. 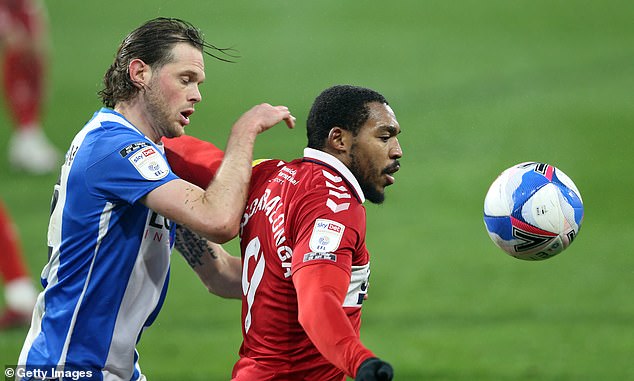 Britt Asombalonga thought he had earned Middlesbrough a point, but the hosts won late on

Cardiff beat Luton 4-0. Sean Morrison and Mark Harris had the hosts two up inside 10 minutes, before Kieffer Moore (59) and Sheyi Ojo (82) rounded off a convincing home win.

Adam Armstrong and Sam Gallagher scored in each half as Blackburn edged Barnsley 2-1, with Romal Palmer netting late on for the visitors.

Tony Pulis’ Sheffield Wednesday played out a goalless draw against his former team Stoke respectively at Hillsborough, while Birmingham and Millwall also finished 0-0.