Top Sport News
Arsenal target Houssem Aouar insists he’s ‘very glad’ he stayed at Lyon...
Chelsea ‘believe they are in pole position to land David Alaba on...
Neymar warns PSG they have to improve and play more as a...
Lennon set to take charge in Milan with Celtic powerbroker Desmond resisting...
Eighth division side Marine to take on Premier League leaders Tottenham in...
Ten years after the Venky’s took over at Blackburn – the Rao...
Javi Martinez would ‘like to try something new’ with his Bayern Munich...
Eden Hazard suffers yet ANOTHER injury with Real Madrid star set to...
Former Celtic boss Gordon Strachan is now FAVOURITE ahead of Eddie Howe...
‘I want to stay for a long time’: Gianluigi Donnarumma hints that...
Home Scottish Premiership Scotland can reach for the stars with win over Israel in the Nations League
Scottish Premiership

Midway through The Three Kings, the new documentary telling the epic story of a trio of Scottish footballing giants, Sir Matt Busby captures the insecurity of the modern manager.

In a metaphor detailing the strained and sleepless nights which follow every triumph, a 61-year-old Busby tells a BBC interviewer: ‘You’re always frightened of the next game. You’re sometimes looking for snow and it’s not falling.’

When it came to Busby and the tragedy of the Munich air disaster, Belgrade played a regrettable cameo. When they pen the script for Steve Clarke’s life story, the events of last Thursday night guarantee an altogether beefier role for the Serbian capital.

Yet, like Busby and every successful Scottish manager who ever lived, Clarke still fears inclement weather. When the clouds dispersed last Friday morning, the national team might have qualified for the sunlit uplands of the Euro 2020 finals.

But the current manager played in an era when the national team made the mistake of taking qualification for granted. And, after France 98, the snow started tumbling from the sky.

‘Maybe as a nation we were guilty of standing still too long,’ said Clarke. ‘Everybody went past us. 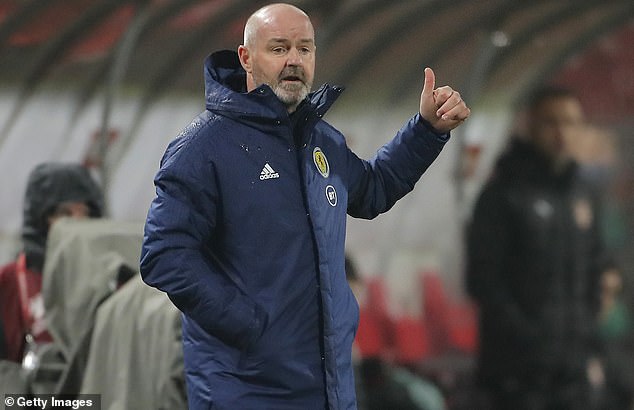 ‘We are in a position now where we are trying to catch up. We don’t want to lose that momentum. We want to keep going.

‘We stopped qualifying for tournaments. It has taken us a long time to get back to qualifying.

‘At any level, you are only as good as your next game. You need to be focused on the targets ahead. You can’t stand still.’

Steve Clarke has ordered Scotland to forget their Euro triumph and set their sights on the World Cup.

A wave of euphoria has swept the country since the national team ended a 23-year wait to qualify for a major tournament.

However, with a World Cup play-off place and promotion to Nations League Pool A up for grabs if they win in Israel, Clarke insists his side can’t afford to rest on their laurels.

Warning his players to treat their qualification for the European Championships as the beginning of the journey and not the end, he said: ‘It has to be the start of something else. It has to be.

‘We need to have a good start in the World Cup qualifying.’

A point clear of the Czech Republic, victory over the Israelis would see the Scots top their Nations League group.

With two places in the World Cup play-offs reserved for the best group winners, Clarke sees an opportunity to secure another safety net before qualification proper begins in March.

‘Obviously, a nice favourable draw in December would be great,’ he said. ‘But then we have three World Cup matches in March, so we can’t get ahead of ourselves.

‘The next step for us now is to concentrate on World Cup qualification. This can give us a platform.

‘If we can win this group and get promotion to the A groups, it gives us a good chance, a back-up which we already know the benefit of.

‘In December, the World Cup is drawn. I believe we are in pot three, which is a little bit of progress.

Clarke’s side secured their place at next summer’s Euro finals with a dramatic penalty shoot-out triumph in Serbia last Thursday night.

Making eight changes after raucous celebrations, a nine-game unbeaten run came to an end with a 1-0 defeat in Slovakia on Sunday.

Keen to ensure his players return to earth for a game in Israel which matters, the Scotland boss pulled down the shutters on any more Euro talk.

‘Maybe when we get back and have a little bit more time to think about it, we can look back,’ said Clarke. ‘But, at the moment, I am only looking forward to the Israel game.’

Between last Thursday and the imposition of further lockdown measures in the central belt, Scotland remembered how to enjoy itself.

Videos of exuberant dressing-room joy made it on to social media. In sudden demand from British broadcasters, the septuagenarians who sang the 1977 hit Yes Sir, I Can Boogie were unexpectedly thrust back into the charts. Baccara, like Scotland, felt as if they’d won the lottery.

When the wine wore off, sobriety returned with a narrow defeat in Slovakia. Yet victory in Israel would restore the forward momentum and confirm the suspicion this is a Scotland team heading in the right direction.

Topping their Nations League group over the Czech Republic would earn Clarke’s side a promotion to Pool A and glamour ties against world football’s giants in future. As well as the boost to SFA finances decimated by Covid-19 and redundancy packages for 18 staff, a win in Israel would enhance hopes of securing one of two qualification play-off places for the Qatar World Cup. 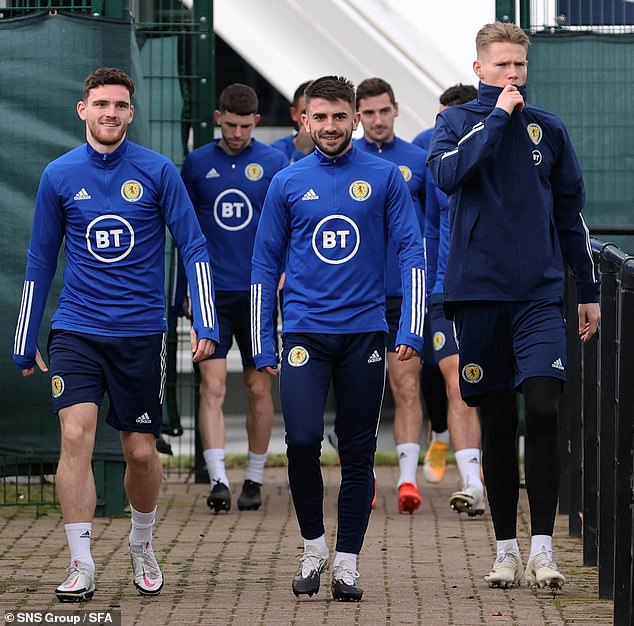 ‘If you are challenging yourself against the very best over the course of six matches over a three-month period, then you can only get better as a group,’ Clarke observed.

‘You can look deeper inside yourself and find ways to compete with the top teams and that’s what we want.

‘We want to be in that position. It would be good. And it’s something that we are all determined to make happen tomorrow night, with all respect to Israel.

‘They are a good team and they have shown in recent matches against us that there is not a lot between the two sides. We will have to be at our best to get the result that we want.’

Scotland and Israel’s international footballers know each other so well they should be sharing a bubble.

Scotland face a huge game in Israel with a potential play-off place for the World Cup finals on the line.

The best two winners of the Nations League groups, who have not already reached Qatar 2022 through the regular qualification process, will earn a play-off.

They will join the ten runners-up from the regular qualifying group stage for the right to make up the final six teams representing Europe at the World Cup.

If we can assume current League A group leaders Italy, Belgium, France and Spain will all qualify automatically, then that leaves League B leaders Austria, Scotland, Russia and Wales battling it out for those two play-off places.

If at least two of those other three League B leaders were to finish first or second in their regular qualifying group, Scotland would be guaranteed a play-off — if they require it.

Winning and topping the group would also have financial benefits for the SFA, who are already celebrating a £9million Euro 2020 windfall after

Scotland qualified for their first major finals since 1998. Steve Clarke’s side would be promoted to League A of the next Nations League with the guarantee of two glamour games at Hampden in front of sell-out crowds — Covid-19 permitting.

Potential opponents for League A games include England, Italy, Spain, France and Germany. The next Nations League competition offers play-off places for Euro 2024 to each group winner.

But the places only go to teams who haven’t qualified automatically and that could play into Scotland’s hands.

In the 2018-19 edition, every single team in League A bar Iceland qualified automatically for the 24-team tournament.

It meant that, although Iceland lost all four ties, they still earned the Euro 2020 play-off place allocated to League A.

Iceland won their play-off semi-final 2-1 against Romania but lost the final 2-1 to Hungary.

Wednesday night marks the fifth meeting of the two teams since October 2018. The last time they met on Israeli soil, Alex McLeish’s team fell to a disjointed and worrying defeat. And the motivation for Willi Ruttensteiner’s team is not hard to find. When they met in the play-off semi-final at Hampden last month, the Scots won their first-ever penalty shoot-out when David Marshall saved the spot-kick of star man Eran Zahavi.

‘The unbeaten run was great when you were part of it but it came to an end on Sunday. It wasn’t a bad performance but losing is difficult, so we want to start the next run now.’ 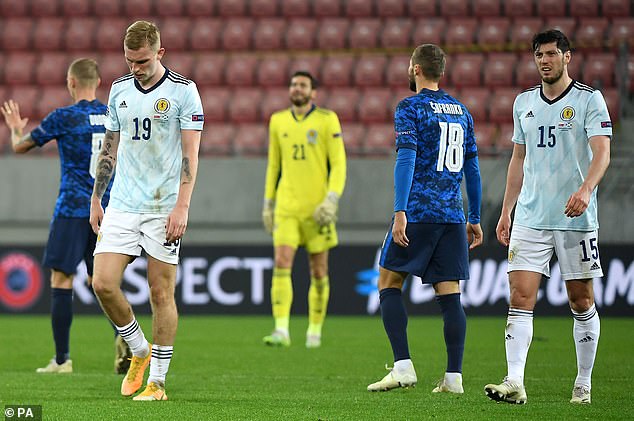 Three games in six days is unusual in any environment and Clarke has benefited from a precious commodity an international manager rarely gets with his players. Time.

‘You have to learn to manage the squad a little bit more,’ he continued. ‘The start of the week was always the biggest game. Then you have to deal with the emotions leading on from that into the next two.

‘It’s good to be around them. I’m used to club football.

‘When you’ve got your players day in day out, it’s very intense, like a club situation.

‘There’s also a little bit of history. We spoke before about creating history. We’ve created that history.

‘Now we need to move on to the next chapter. We were focused on the game on Sunday.

‘You saw the performance was good, focused and it deserved more than we got. Hopefully, you will see the same tomorrow night because three points is vital.’

Neil Lennon insists he has the full backing...