EXCLUSIVE INTERVIEW: Sam Allardyce admits he is still waiting for the right job

Sam Allardyce sinks into a sofa and talks about the jobs he loved and the jobs he lost. And of those which never were. But the job which might tempt him back into business he finds harder to define.

‘It could be a relatively well-structured and ambitious Premier League club,’ says Allardyce. ‘Albeit one that might be in trouble when you go in. Because who will sack a good manager if you’re doing well? Not many.

‘Or there could be an opportunity to promote a Championship club, like I did at West Ham. The West Ham journey for me was fabulous. Getting them up in the first year was an absolute joy. 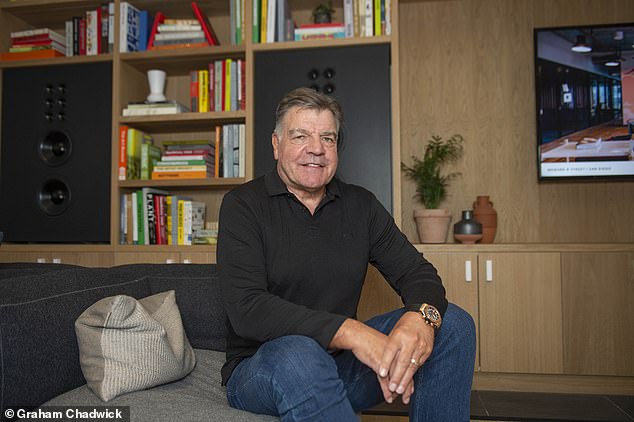 ‘The right opportunity hasn’t arisen yet. And it is harder for me to say yes than ever before. Never say never. Another opportunity in football is not beyond what I want, but I’ve come to terms with the idea it might not happen.’

It is 20 months since the former England manager was dismissed by Everton, during which time he has turned 65, travelled the world at leisure with his wife and learned to be choosier when the offers appear.

Allardyce rejected interest from China because he did not want the cultural upheaval at this stage of his life.

He declined an invitation from Mike Ashley to return to Newcastle, conscious of how it had turned sour for him on Tyneside in 2007 and how a return would play out with supporters who adored Rafa Benitez.

There were conversations with people connected to consortiums with plans to take over at Bolton, the club he served for more than a decade as a player and eight years as manager, leading them into the Premier League and Europe.

‘I had many disappointing meetings with people who said they were going to purchase the club,’ he says. ‘I found it wasn’t about development in football terms but in terms of what you could get from the land around the club. 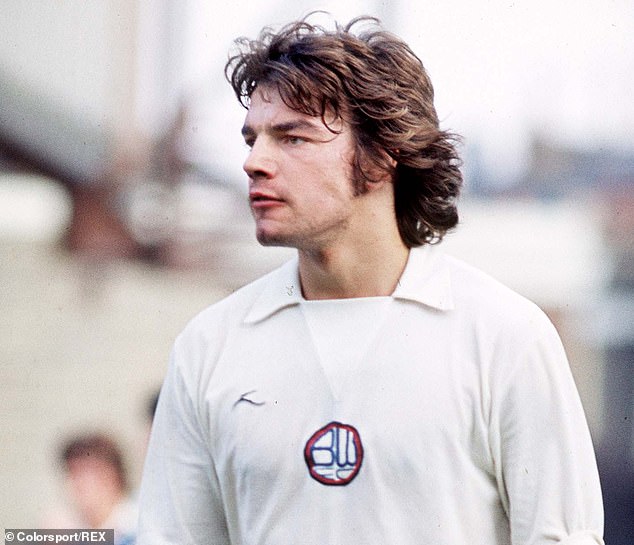 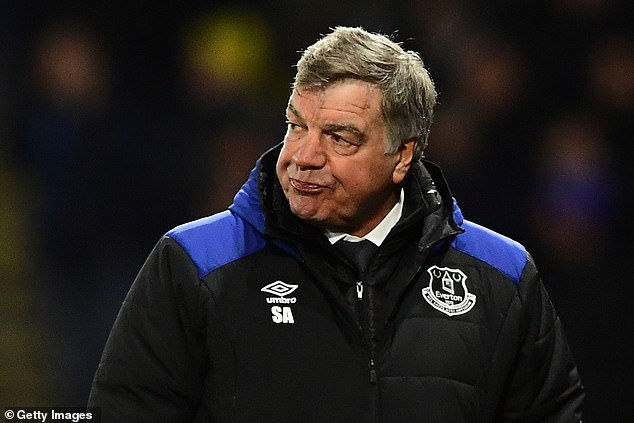 ‘When it came to the football it always felt like it was a secondary part and for me it needed to be the reverse. It needed to be someone who wanted to regenerate the club and if we could develop the rest alongside it then fine.’

And he was approached by Watford as they sought their third manager of the season.

‘Approached yes, but it wasn’t one for me,’ he says. ‘Nigel Pearson has done a great job. He’s come back with a vengeance and shown everybody what a good manager he’s always been.’

Watford under the Pozzo family have become the antithesis of a secure job opportunity and Allardyce, after four short-term appointments, would rather not dive back into a firefighting role.

‘Recently for me, it has been more about crisis management,’ he says. ‘That’s what people have labelled me as.

‘All Sam can do is crisis management. He can get a club out of trouble. I’m proud that I’ve never been relegated.

‘And if that’s what’s available to you then that’s what you do. But I’ve always thought I was about much more and sometimes you’d like the opportunity to do a bit more than that.’ 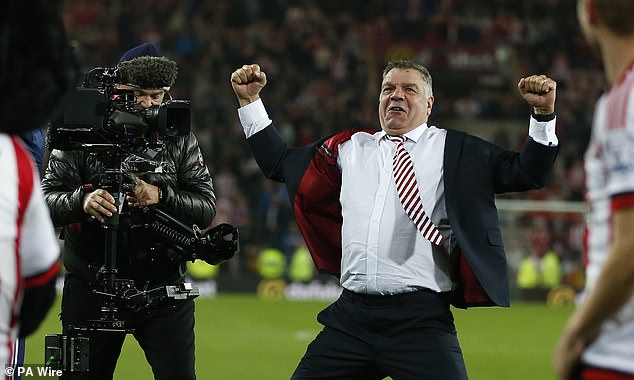 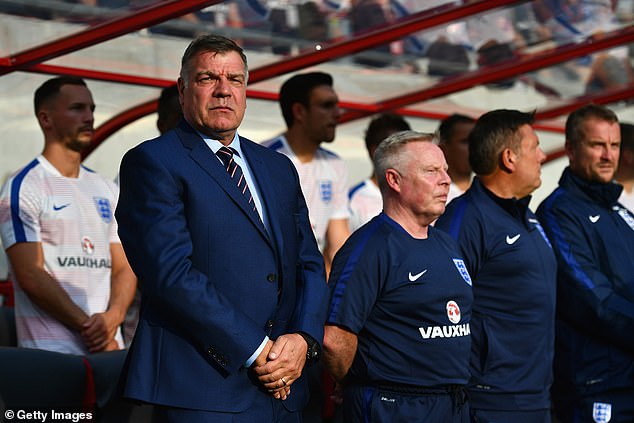 His time with England ended in acrimony, inside just 67 days and a single game in Slovakia 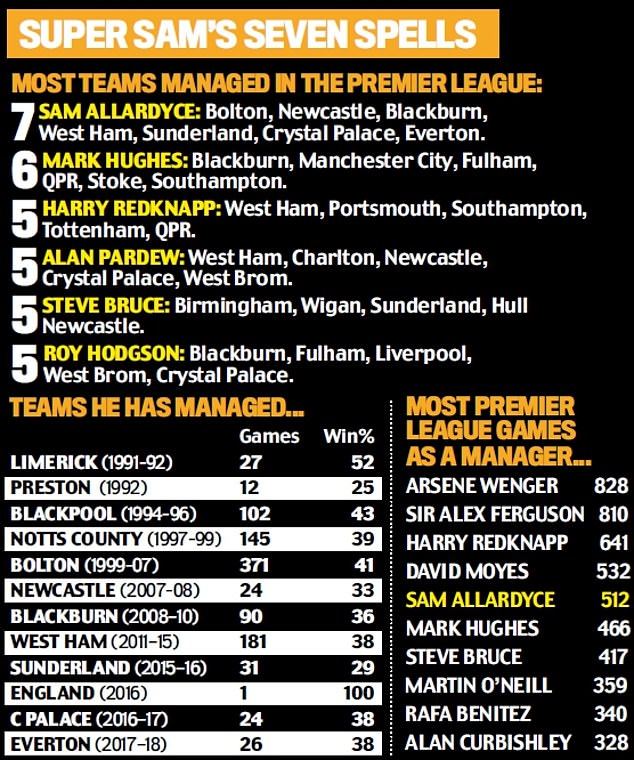 Allardyce quit Sunderland after nine months to take the England job which proved to be the shortest of all, just 67 days and a single game before he resigned after a newspaper sting at the outset of a World Cup campaign in which they reached the semi-finals under Gareth Southgate.

The scars remain. ‘The thing is, you’re the only one scarred by it,’ he says.

‘Nobody else is thinking about you so you’ve got to get on with it. And that was the beauty of Steve Parish’s call to get me back into it at Crystal Palace.

‘That finally put the whole scenario behind me. I’ll never forget it. I know I was wronged and we did our best through the solicitors to prove that it wasn’t what everybody said it was. It was very much fabricated.’

Allardyce spent 151 days at Selhurst Park, securing Premier League survival in 2017 and then stepped aside with two years left on his contract.

‘Palace was a question of me moving on because of what was happening in my personal life,’ he says.

‘I thought that would be it, but Everton turned up and that’s why I came back. I never expected Everton to come for me. I thought that was my opportunity. I thought it was my first chance in a long time to try to build a club.

‘They had the finances and Farhad Moshiri is very ambitious and wants to compete in Europe. Then it was whipped away very quickly. It wasn’t to be and that’s a shame.’ 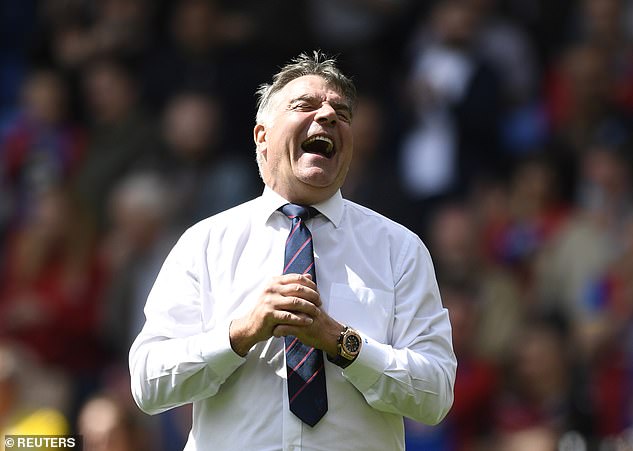 Allardyce spent 167 days at Everton. He led them from 13th in the Premier League to eighth before he was replaced by Marco Silva, who was himself replaced 18 months later by Carlo Ancelotti.

‘They’re a massive club struggling to find the right direction. They’ve got a big manager now with a big reputation and he’s a great guy.

‘Hopefully that will be enough with the right recruitment ideas to get the club where it wants to go because Liverpool up the road are the world champions and it’s massively depressing for everybody who supports Everton.’

It is noon and Allardyce has been on the go since his breakfast show shift on talkSPORT with Alan Brazil, a partnership which prompts him to recall a day when his daughter Rachel was born and he dashed from hospital to Burnden Park to play for Bolton against Ipswich in 1979.

Brazil scored two wonderful goals in a 3-2 win for the visitors, only to be eclipsed by Frank Worthington’s goal of the season when he flicked the ball over his own head, wrong-footing the entire Ipswich defence, and smashed it in on the volley.

Allardyce scored Bolton’s second that day with a powerful header and neglects to mention it which is not exactly in the Big Sam character.

There is a lot going on. He is involved in a new project called My Club Lotto which is designed to generate funding for clubs at grassroots level via a monthly lottery and is making plans for his own YouTube channel.

‘We’ll do a couple of pilots and see how it goes,’ he says. ‘The idea is to communicate with supporters who want to chat about their club with some insight into what might work and what might not. It’s a challenge.’ 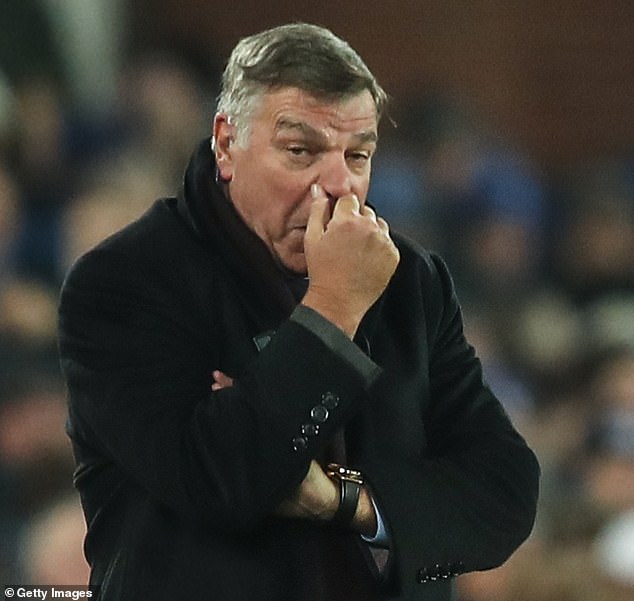 He ended up being a mere stop gap at Everton, where he lasted only 167 days in charge

Allardyce has never been afraid of his own opinion, nor short of faith in his own ability to compete with the biggest clubs and the most acclaimed managers, feted for their tactical wizardry.

Now he fears we are hurtling towards a competition subdued by a homogeneous brand of football which favours the wealthiest clubs who can afford the best players and the biggest squads.

‘Pep Guardiola has moved us all forward in a direction we’re all happy with,’ says Allardyce. ‘But there’s a dangerous trend towards over-playing and thinking you can only play this one way.

‘Following that trend means the Premier League will become very boring if everybody plays the same way. The Premier League as the best in the world was down to the variation in styles and systems. Managers created such a fabulous league and we could be in danger of losing that.

‘Football is entertainment. You have to entertain as well as win, I understand that, but this is eroding the basics of the game because if you give the ball away in your own half you’re going to fail miserably.

‘What’s your job as a centre half? At the moment everyone seems to think it’s to play out from the back, which goes against all the principles ever taught in football. 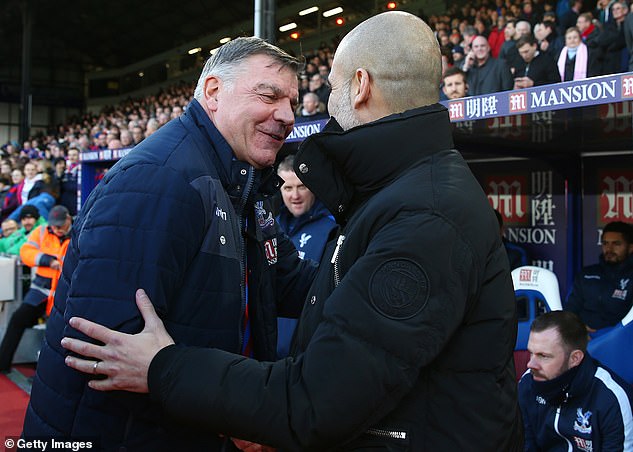 ‘Too many players are giving the ball away in their own half.

‘It’s fine if you have the best players in the world because you’re going to do it better than anyone else, and if you don’t it’s very difficult.’

‘You wouldn’t hear Martin Tyler saying it because it would be frowned upon.

‘You’ve got to be careful about saying Liverpool play long ball. But that’s the way it is. They play long ball exceptionally well and better than anybody else. And that’s why they do it.

‘One of the best long-ball players is the goalkeeper at Manchester City. His long balls are unbelievably effective. So when you think you’re tying them down he goes ‘bosh’ and the ball is in your box and Sergio Aguero is scoring.

‘The top clubs have different ways to beat you. So this emphasis on playing out at the back is over-cooked. Over time it’ll work its way out and we’ll return to normality.’

Allardyce is complimentary of Jurgen Klopp’s Liverpool, who he calls a ‘long ball’ team

His passion fires and his instinct is drawn from the experience of a lifetime in the game and more than a thousand games as a manager, many of them in the top flight, in charge of seven different Premier League clubs.

‘I do miss it, some things more than others,’ says Allardyce. ‘Mostly I miss getting up in the morning and driving in to deal with the expectations of your club and taking that challenge on.

‘If the right opportunity comes then great, I’ll go into it 100 per cent, and if not I’ll continue doing what I’m doing.’

My Club works with the sports clubs to promote the services to the club’s fans and their friends, families and local communities. Every time a fan uses one one the services, the club earns revenue.

It’s a simple concept that helps cash starved sports clubs raise the funds they need to keep the club going and provide sport to the community. For more info go to www.myclubgroup.co.uk