History is repeating for Leeds… another home defeat by Wigan, more missed chances and their promotion charge is faltering again

By Ross Heppenstall For The Football Frenzied Republishing

Leeds United fans should buckle up and sit tight — another white-knuckle ride lies ahead in the next three months.

With 16 games remaining, doubts persist over the club’s ability to finally clinch a Premier League return after a 16-year absence. They remain well positioned in second place and desire continues to drip from every corner of Elland Road.

The potential of the club, from top to bottom, is plain to see. But do not underestimate how badly Marcelo Bielsa’s side have faltered in recent weeks. In December, they topped the table and held an 11-point advantage over third place.

They have since won just twice in nine attempts and are in danger of being overhauled in the automatic promotion places. Do not overlook that either. Now they face successive trips to Nottingham Forest and Brentford before a visit from another top-six rival in Bristol City.

Despite their faltering form, Leeds striker Tyler Roberts claimed: ‘All of the boys know that we’re the best team in the Championship — we deserve to go up. We’ve shown that even last season and this season especially with our performances, dominating game after game.

‘We know that we’ve got it in ourselves and we believe that we can get over the promotion line.

‘There’s still a long way to go but these next few games are against the teams that are fighting with us and it’ll show what we’re about.’ 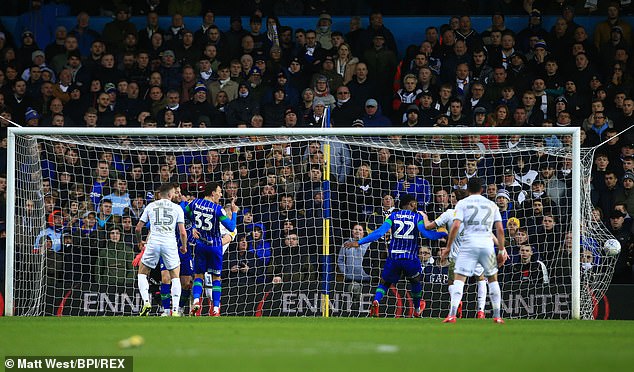 Roberts added: ‘After last season, it’s not a nice feeling for Wigan to come here and get another three points. But this is the Championship. It’s not so much about the quality and talent in your squad, it’s also the mentality.

‘We’ve dominated the whole game and we do that in most games. Obviously the chances haven’t gone in today, but we’re still up there ready to get promotion.’ 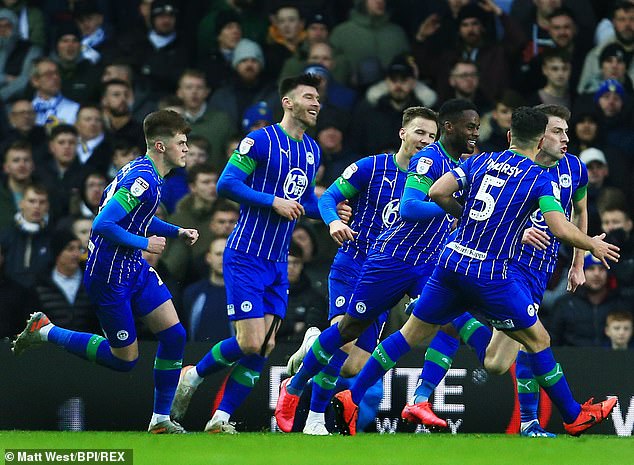 This game followed a familiar pattern for Leeds — 70 per cent possession, a plethora of chances, and a failure to convert any of them. Patrick Bamford, a two-goal hero in midweek against Millwall, spurned a number of opportunities while Jack Harrison struck a post early on. French striker Jean-Kevin Augustin, signed last week on loan from RB Leipzig, did not even make the bench.

Bielsa also came under scrutiny for making only one substitution as Leeds chased the game following Wigan’s 59th-minute winner. Joe Williams’ corner deflected off Pablo Hernandez and past goalkeeper Kiko Casilla, who should have done better.

Augustin could feature for Leeds Under 23s at Sheffield Wednesday on Monday and Roberts said of the Frenchman: ‘He’s raw and powerful at just getting in behind and making defenders nervy. Pat and him are different. Pat does the pressing and is technically very gifted, so there are obviously plusses for both of them.’

The result marked a sweet first league start for Wigan left back Tom Pearce, who was sold by Leeds last summer. Pearce almost broke clear for a second Latics goal late on and said: ‘It was an unbelievable win. To come here and beat a side who were top of the league was a massive result for us. Everyone is buzzing but I wish Leeds all the best.’ 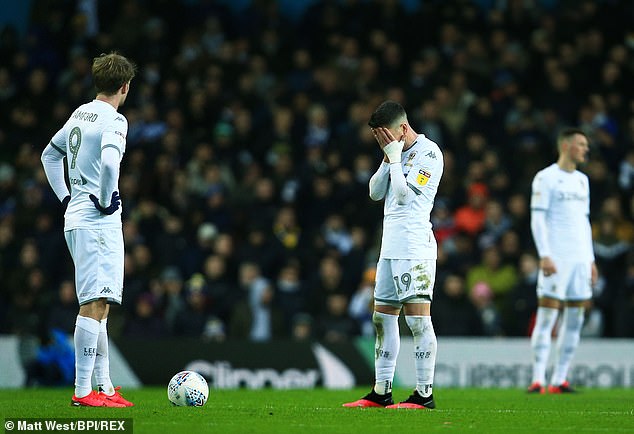