When the dust has settled on it all, the compensations for the travelling side who contributed so much to this extraordinary night will include a form of deliverance it provided for the maligned, ostracised Mesut Ozil. He has been given just two starts all season, lasted barely more than an hour on each occasion, and yet was the author of almost everything that Arsenal accomplished here.

There were the contributions, too, of a couple of young Londoners: 22-year Ashley Maitland-Niles – inventive and dangerous – and Joe Willock, whose goal – the game’s ninth – will live long in the memory and seemed to have seen Arsenal home.

Yet those kinds of consolations will take some time to form because of Liverpool and that winning mentality of theirs. The game was in its 94th minute when Divock Origi – talisman of the Barcelona miracle here last Spring – took the game into the penalty shoot-out. After Dani Ceballos had missed his kick, the night concluded with an 18-year-old Liverpudlian – Curtis Jones – taking the winning one in front of the Kop. 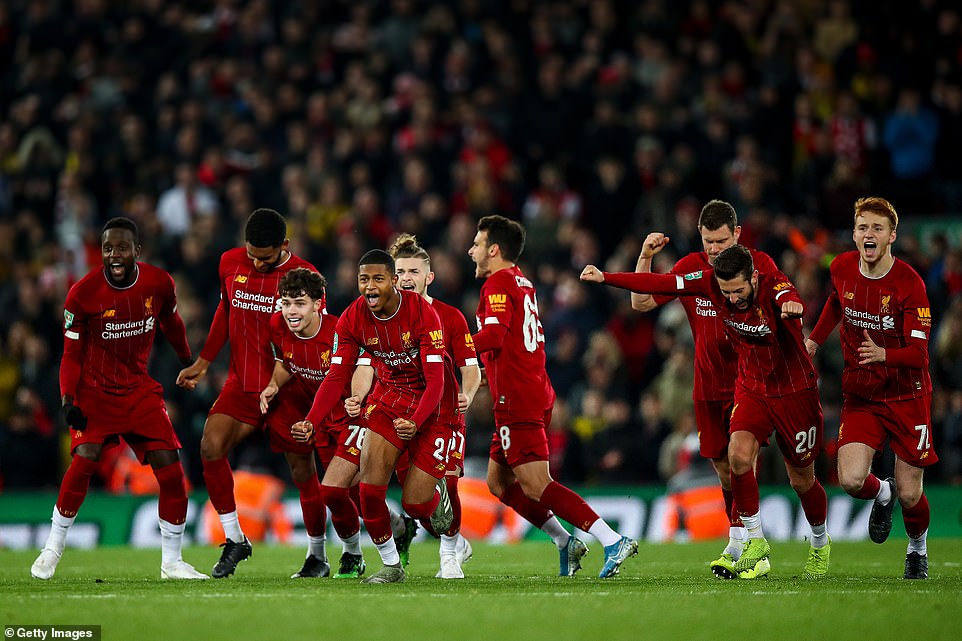 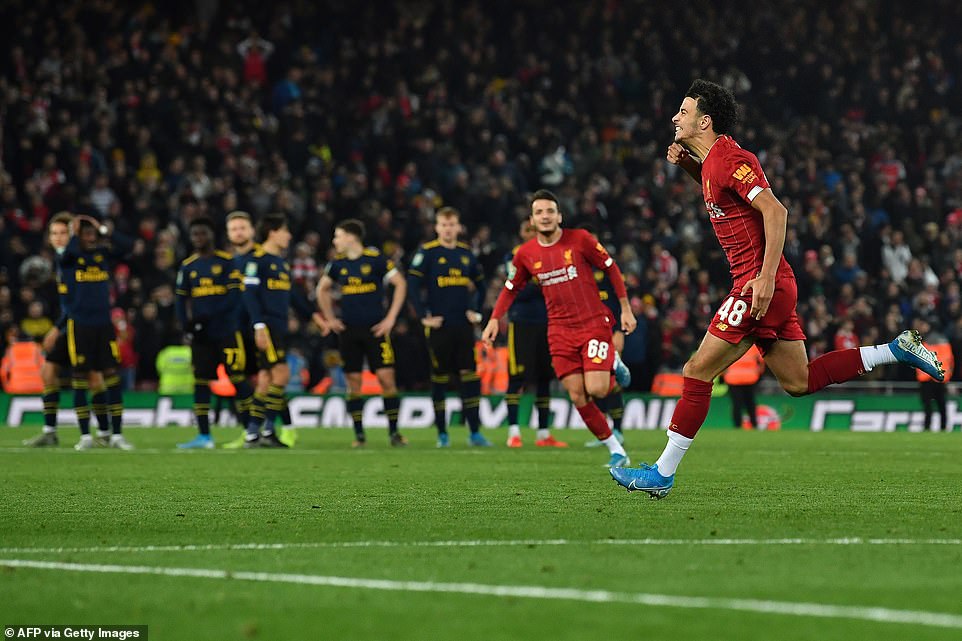 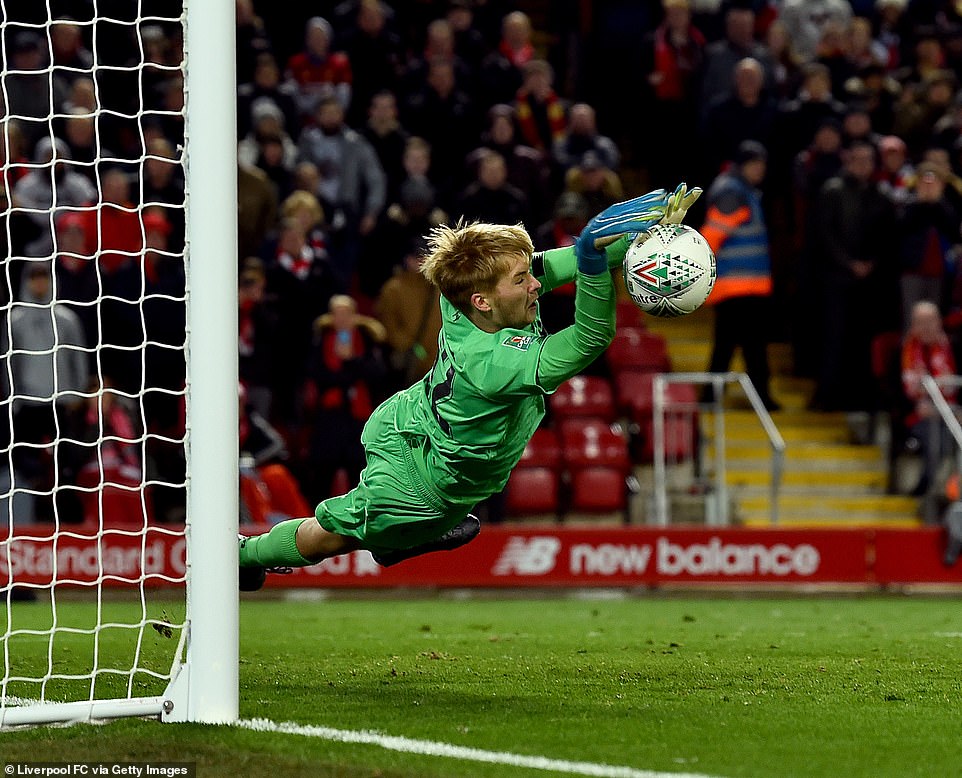 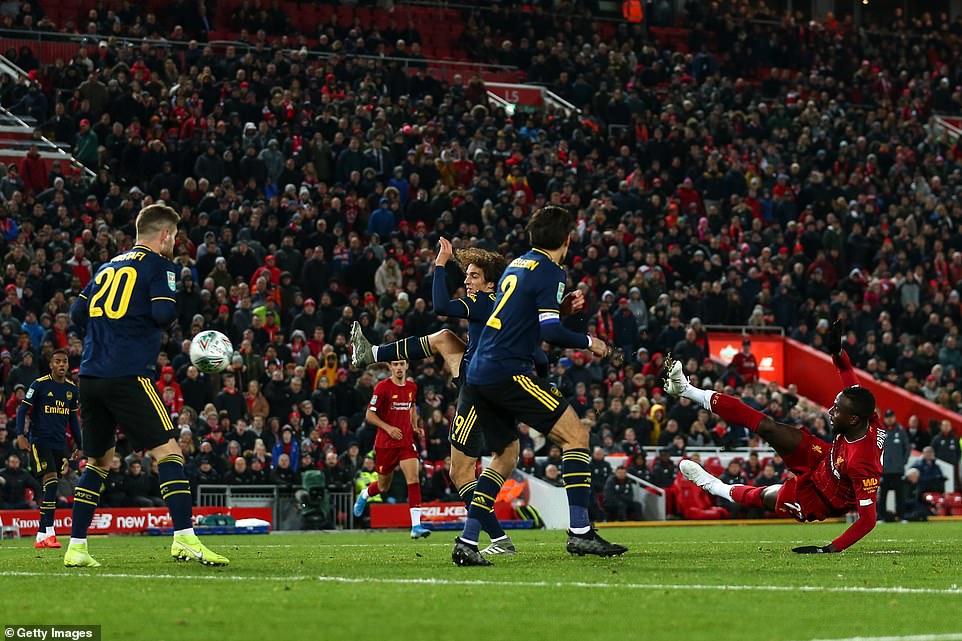 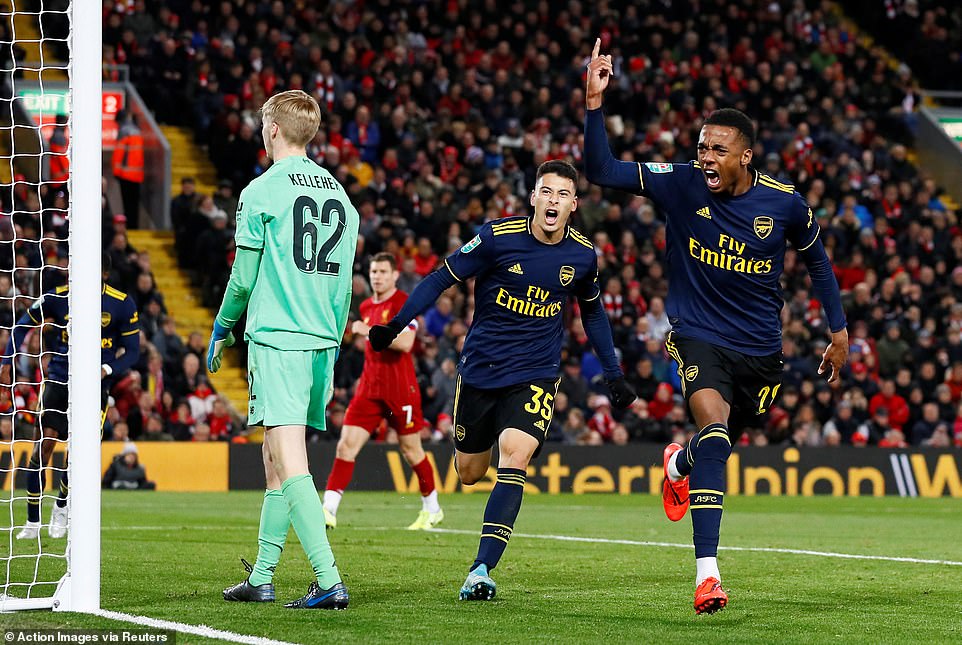 ‘Wonderful boys,’ Klopp said, that smile of his even broader than ever. He ‘couldn’t care less’ about any technical errors, he said, and it really was that kind of evening: an occasion when teenagers thrown in by both managers displayed that exquisite, unfettered freedom of youth. This was an unexpurgated, uninhibited kind of football, in which every other move seemed to create a goal of exquisite class when the game had reached its second half peak.

Back in the early stages, before the game accelerated up to and beyond levels set in the 2009 4-4 draw in which Andrei Arshavin scored all of Arsenal’s goals, there actually was a significant technical component to consider: some technical deficits in Liverpool’s defence which Klopp will want to see addressed.

Liverpool had gone rapidly ahead – Alex Oxlade-Chamberlain whipping in a cross which Shkodran Mustafi turn into the net off his left knee – but Liverpool’s defended with timidity and naivity which made them terribly vulnerable to Ozil the architect.

There was more than a hint of doubt about the first of the goals that the German carved out. Lucas Torreira was fractionally offside when Bukayo Saka, collecting Ozil’s smart lay-back, struck a shot which goalkeeper Caoimhin Kelleher could only tip out in front of him to the Uruguayan. But goalkeepers of world class do not allow shots to squirm out for a waiting predator. There was weakness throughout the build-up, including Alex Oxlade-Chamberlain’s initial concession of the ball.

Arsenal’s second followed quickly, when another Maitland-Miles cross was navigated forward into the six-yard box by Ozil, for the lurking Gabriel Martinelli to tap in. But Arsenal’s third was the worst from a Liverpool perspective. Williams played a ball out of defence which placed Harvey Elliott under pressure. Ozil pounced on the 16-year-old’s hurried attempt to shift it on and played in Bukayo Saka, who crossed for Martinelli to score. 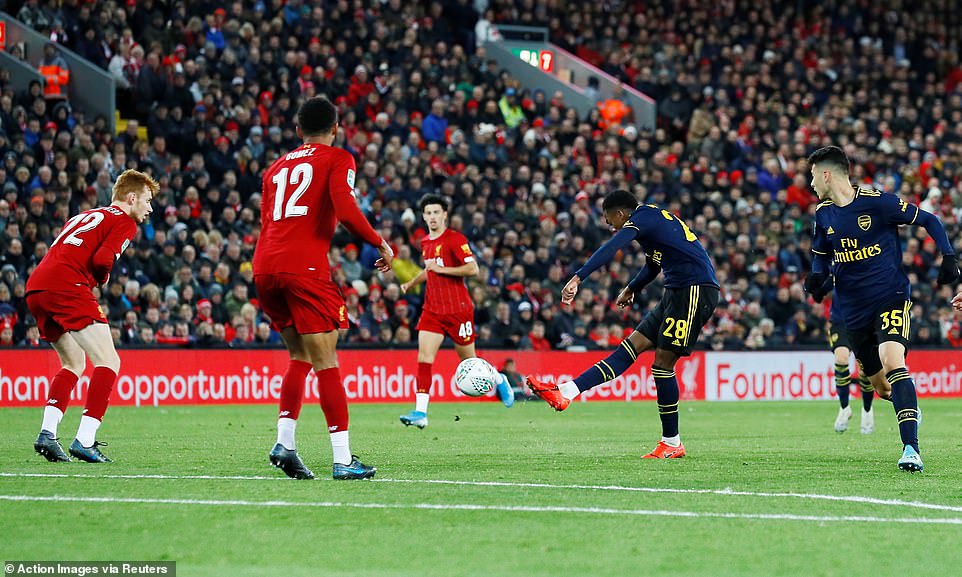 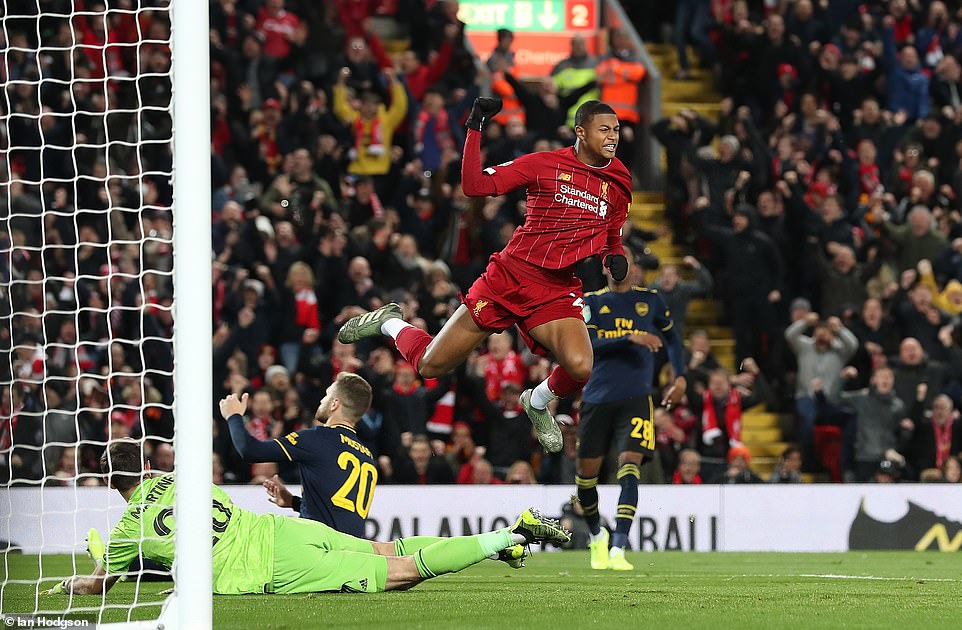 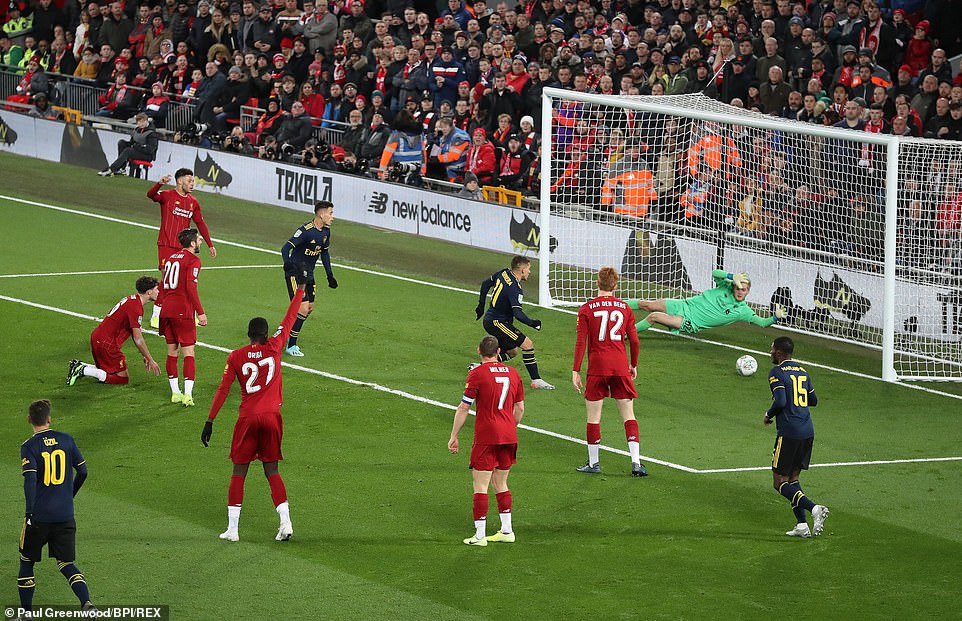 The Gunners responded quickly and Lucas Torreira equalised at Anfield, although replays showed he was offside 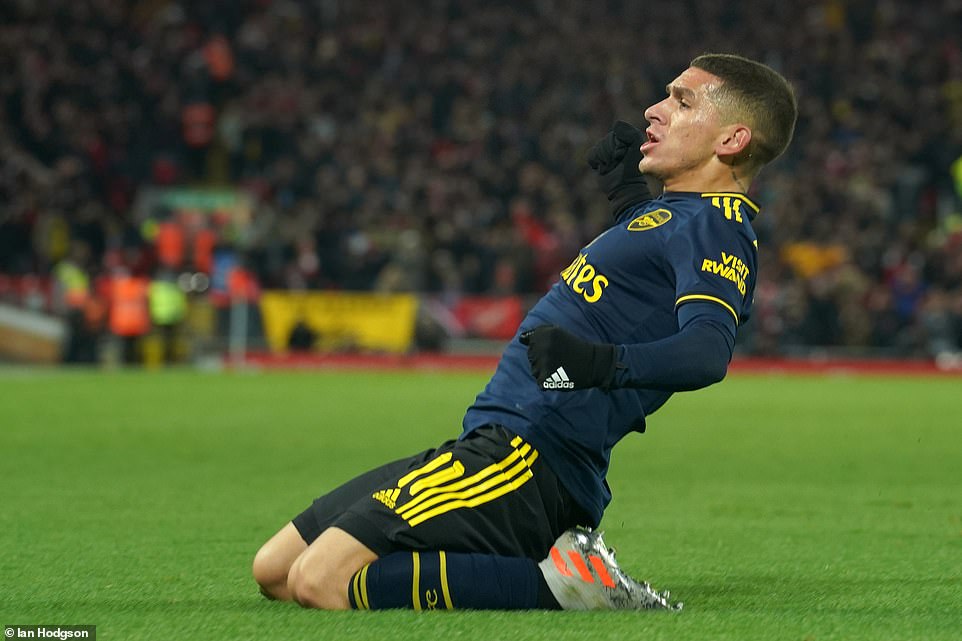 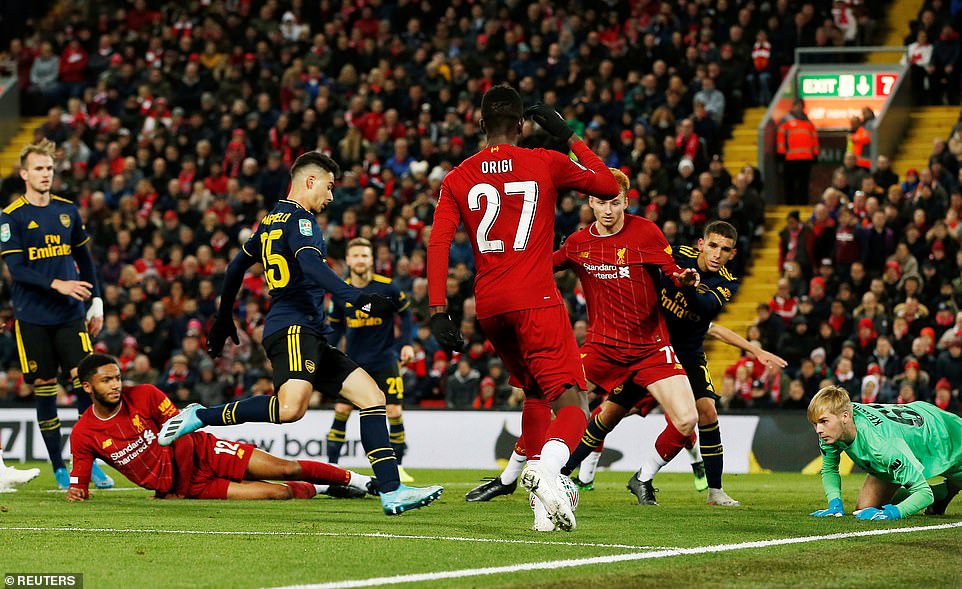 Liverpool struck back. The absence of VAR was actually a problem on a night when captain Hector Bellerin escaped a very strong handball appeal after blocking a Naby Keita shot. Klopp’s players were compensated within two minutes, when Martinelli was adjudged to have made a connection with Elliott as he took a ball into the area. Milner converted the penalty and by half time Liverpool were ruing a missed chance of an equaliser when Origi headed over an elementary chance from Elliott’s well-weighted cross.

Even Milner seemed afflicted by the wildness around him. His back-pass of horrific proportions just after the interval was seized on by Maitland-Niles who had knocked the ball wide when Ozil materialised again to rescue it and return with a backheel into the path of his teammate, who buried it.

The removal of Ozil by Unai Emery at this stage was curious, given the contribution he was making. The manager muttered something about ‘tiredness’ and insisted he stood by the decision. ‘We had decided beforehand and I think in that moment [we had to be] calm.’ It was hard to agree with his decision as Liverpool stormed back from 2-4.

Oxlade-Chamberlain, more than compensating for Arsenal’s first goal, hit a bouncing ball into the roof of the net from 20 yards to bring his side back into contention. Then Origi stepped up, spinning on the edge of the box an unravelling a goal to match his team-mate’s after taking on a ball from substitute Curtis Jones.

Willock seemed to have sealed the night after Liverpool’s midfield opened up for him and allowed him a crisp strike to score a goal surpassing all the others. But in the game’s 94th minute Origi hooked in a volley to take the game to a shoot-out.

It was hard to see Arsenal recovering to win it, though the young gunslingers kept firing, until Ceballos’ right-footed penalty – Arsenal’s fourth – was saved by Caoimhin Kelleher in the bottom corner. ‘As a supporter I enjoyed it,’ Emery reflected. ‘I was happy with that.’ Only in the cold light of day he will really appreciate what might have been. 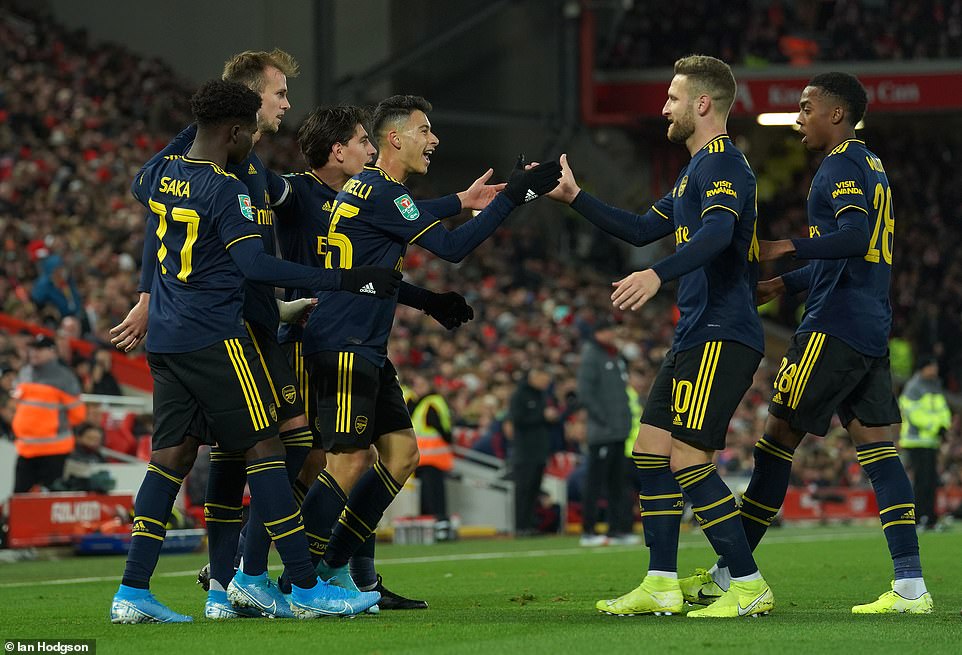 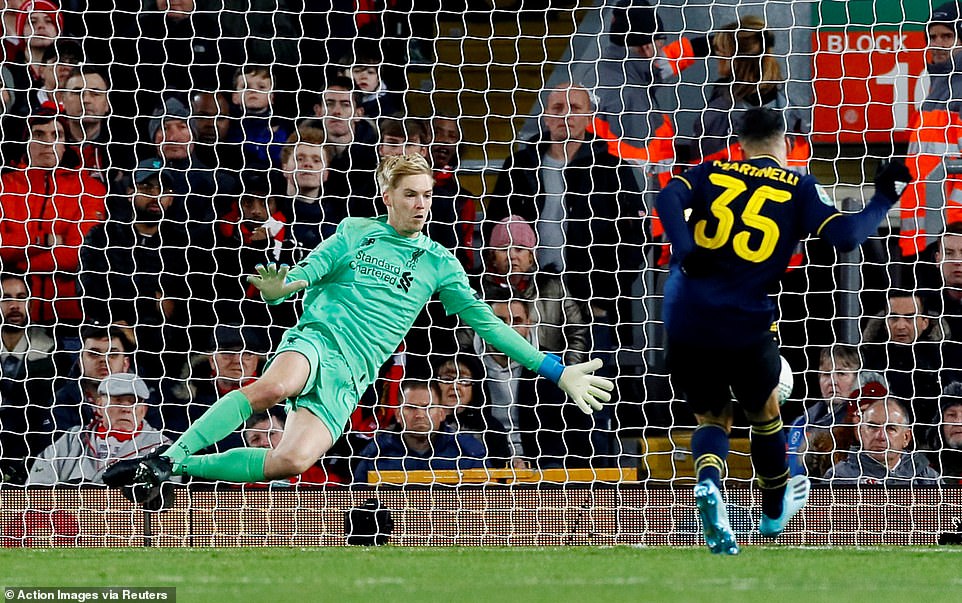 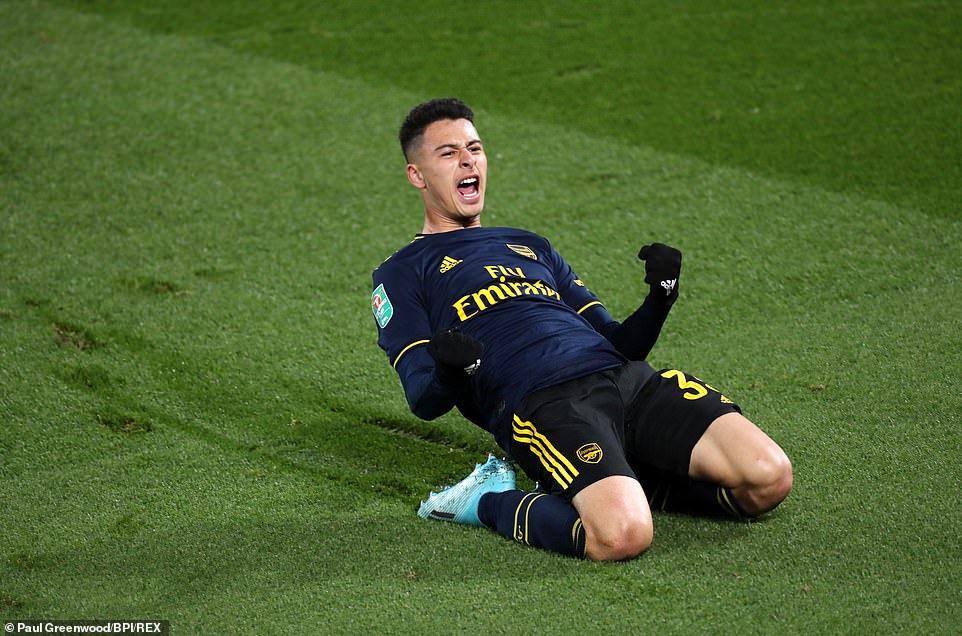 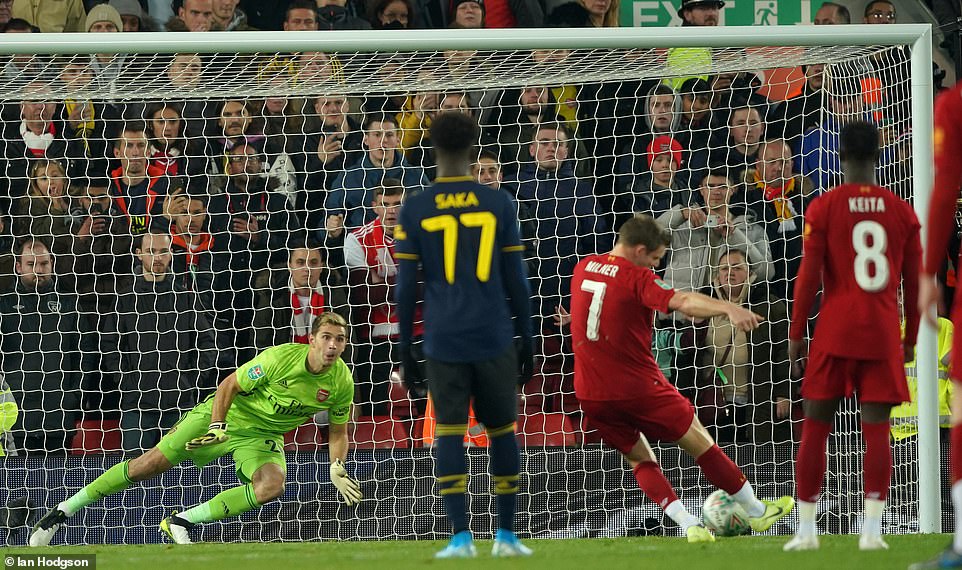 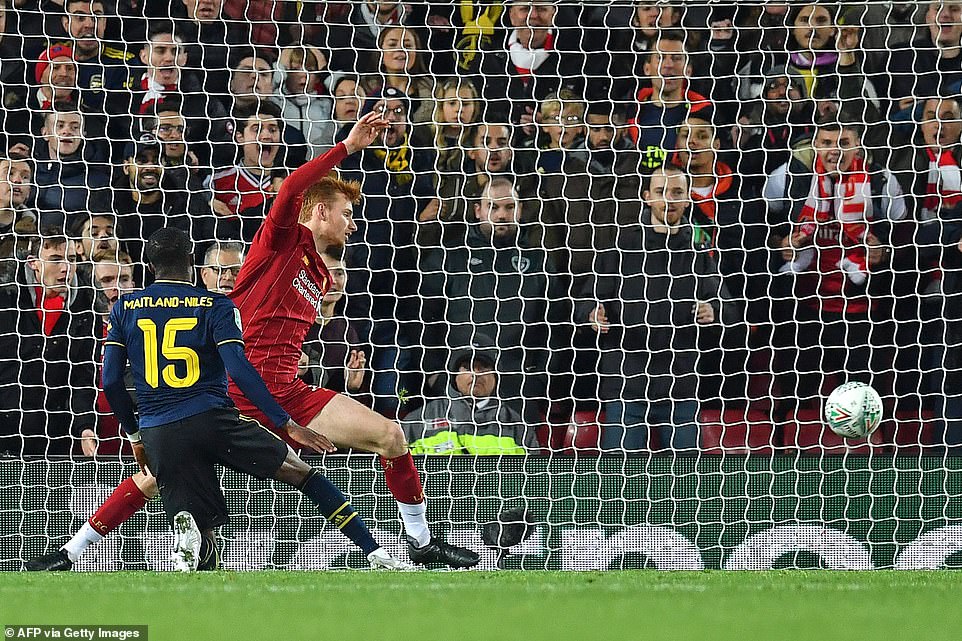 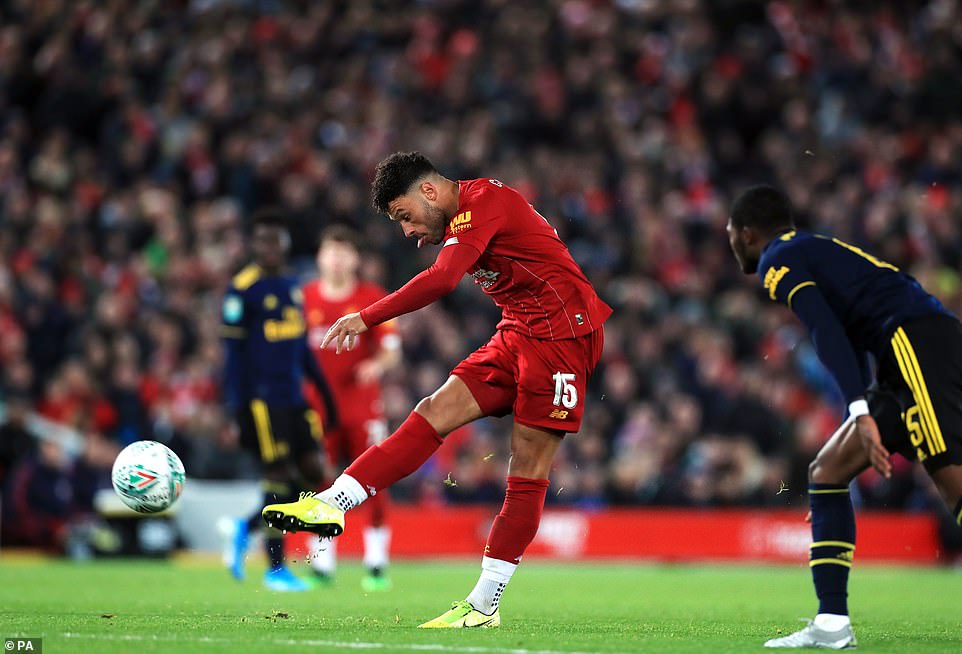 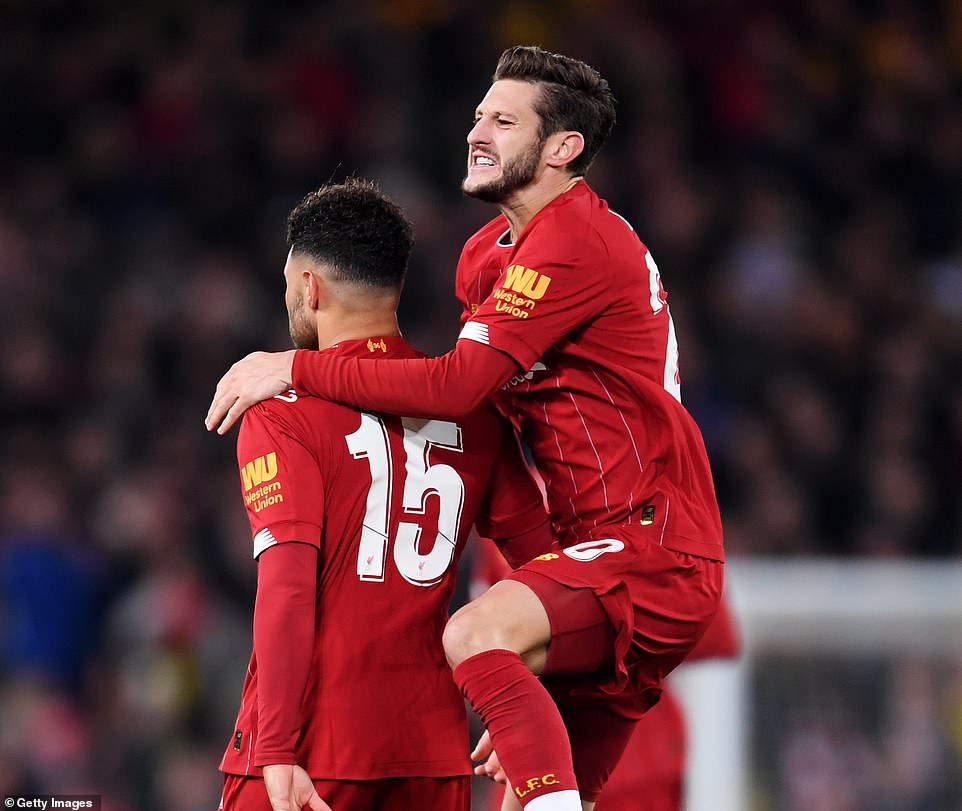 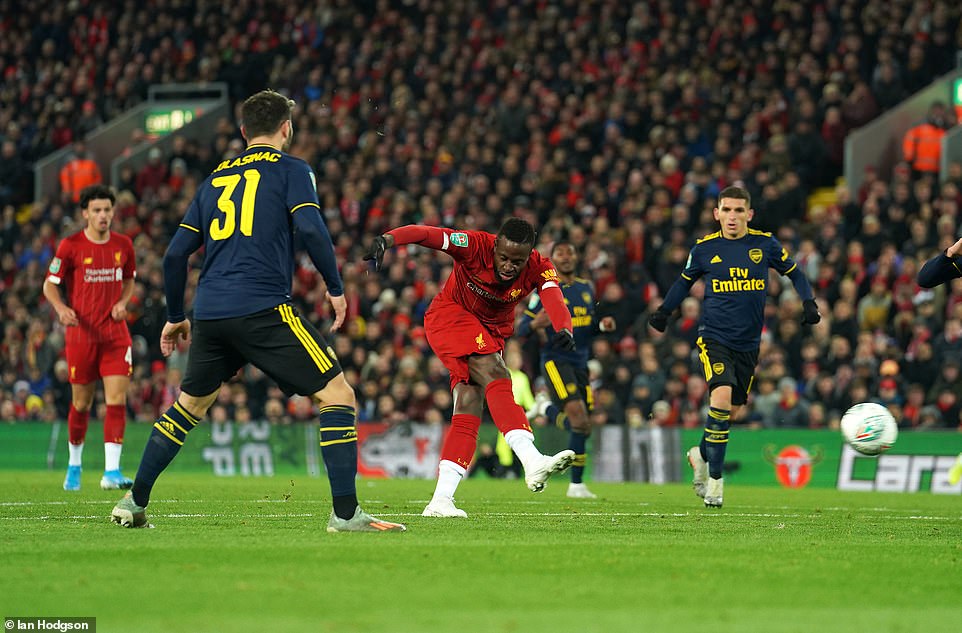 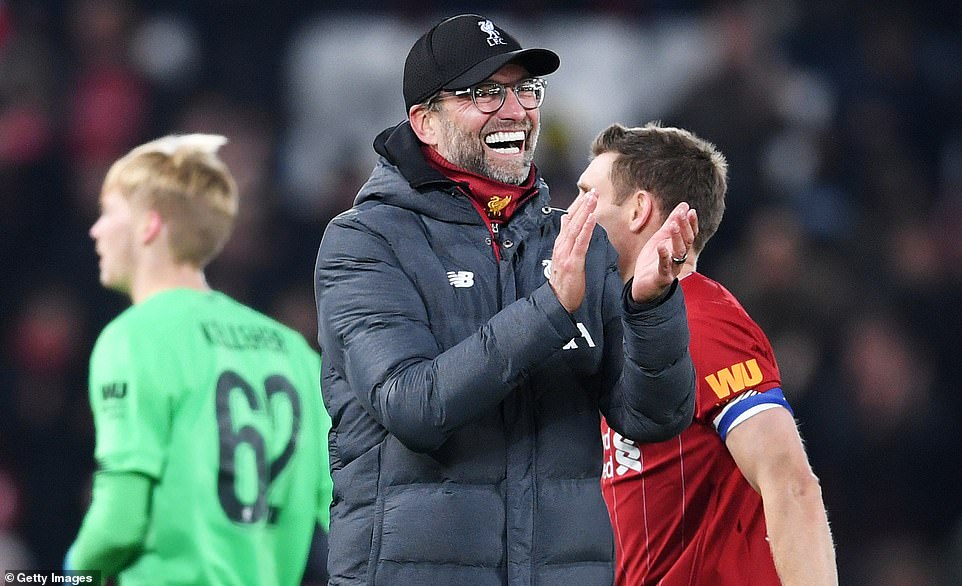