Kyle Lafferty’s career has taken him from his hometown of Enniskillen, sandwiched between Upper and Lower Lough Erne in the north of Ireland, to the ancient city of Palermo in Sicily, via Sion in Switzerland’s Rhone Valley.

The 6’4 striker, who is renowned among UK fans for his spell at Rangers in Scotland, now finds himself living in Oslo, Norway, and making a 180 km daily round trip to turn out for Sarpsborg 08, a modest club in a modest town of the same name.

He is noted for his exploits in Glasgow and his performances for his country, but he is now inadvertently carving himself out a niche as a hipster footballer, one of those players – not quite journeymen – who aren’t afraid of a left-field opportunity.

He turned down clubs in Scotland to take up the offer of playing at arguably his lowest level yet, a relegation dogfight in Norway. With a young daughter and a wife of three years, you might ask…why?

‘Apart from Rangers and Hearts, I’ve probably had my most successful spells away from the UK, especially Palermo,’ the 32-year-old explained to Sky Sports.

‘For me, it doesn’t really matter where I play my football. Obviously in the UK, it’s closer to home, closer to the family, but if an opportunity comes up and it excites me then I’m not afraid to take it.’ 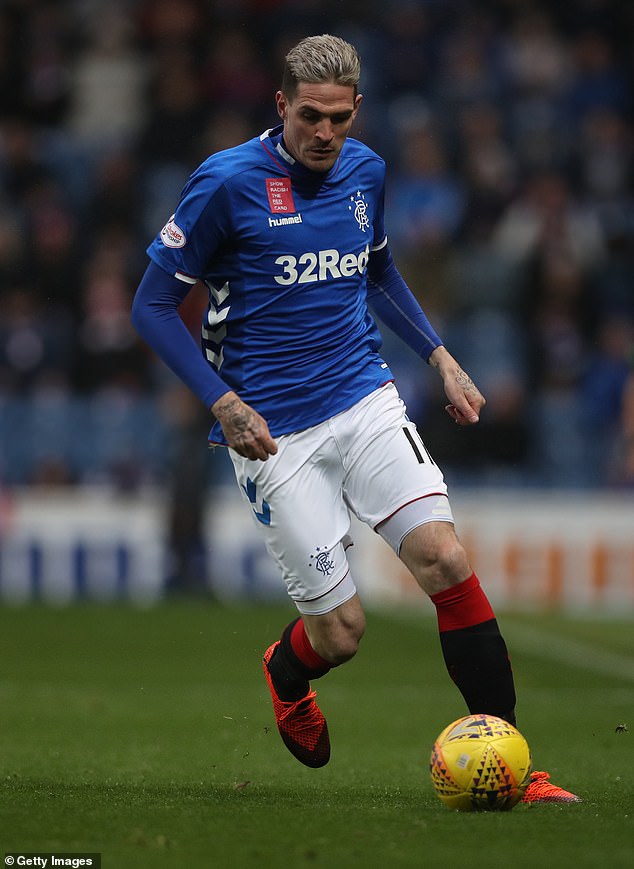 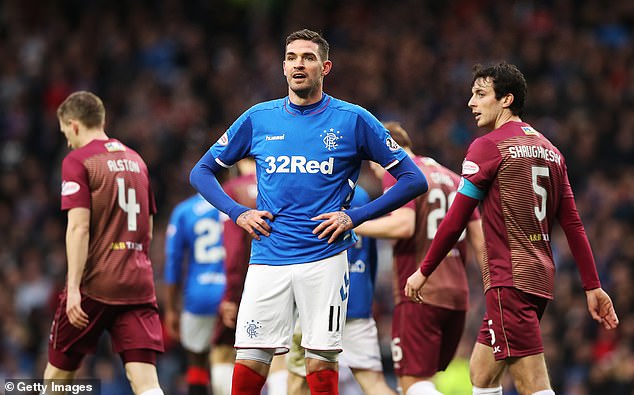 And the move is working, so much so that the Enniskillen man is the subject of a chant from the Sarpsborg fans, a simple but effective ‘we love Kyle Lafferty’.

Before he moved, the club’s sporting director Thomas Berntsen called Lafferty a ‘warrior’ and a ‘tough guy’.

‘There will be some yellow cards, but also many goals. We think this will be very good,’ he added.

Lafferty, who started his professional career with Burnley, joined Geir Bakke’s side in August with them rooted to the bottom of the table midway through their season – having left Steven Gerrard’s Rangers by mutual consent.

While he has only scored once in eight games, and assisted just twice, Bakke and Lafferty’s teammates credit the big man’s personality and experience with giving the minnows a chance at survival.

‘He’s a clever player and he understands football. He’s good at finding space behind the opponent and in between them and he gives something to his team-mates out there with his charisma and his passion for the play,’ Bakke explained. 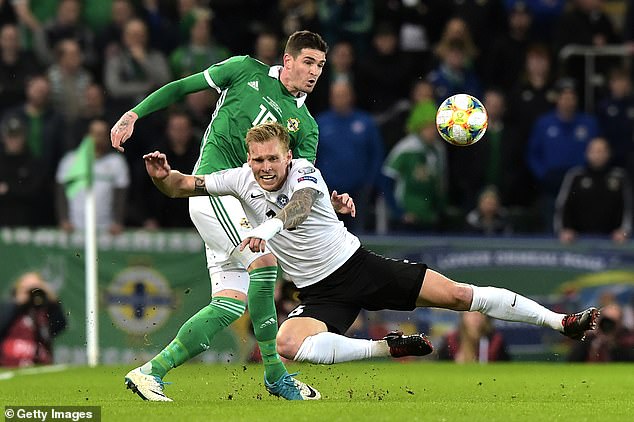 Aside from his exploits at Rangers and Hearts, he is known for his Northern Ireland career 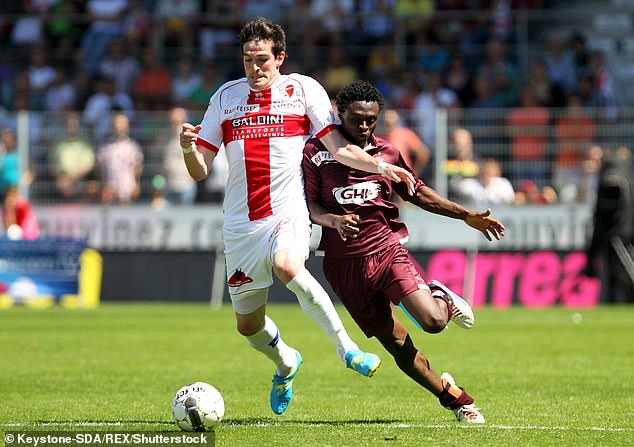 ‘He’s a British player coming to Norway, it’s fun for us and for Norwegian football. We didn’t take enough points from the summer but when he comes in the boys around him, they like to see this smile and the way he is every day.’

Sarpsborg now sit 11th out of 16 teams in the Eliteserien, formerly Tippeligaen, with Sunday’s game proving to be a relegation decider.

Lafferty and co travel to Lillestrom, 20km east of Oslo, with their opponents also on 29 points, just two above the drop zone.

Sarpsborg’s superior goal difference of minus 10 keeps them above Stromsgodset, Lillestrom and Tromso. The two teams below that in the relegation zone are locked on 27 points, so it is all to play for come 5pm. 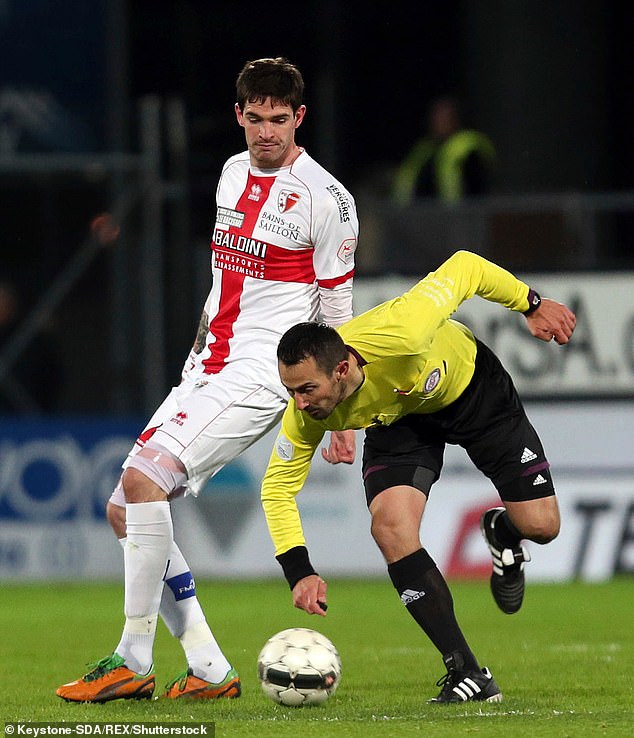 Banter and smiles alone can’t win the game, so Lafferty will have to dig deep into his wealth of experience that has seen him score 20 goals on an international level and important goals in Glasgow’s Old Firm.

Beyond that, it is unclear what Lafferty’s intentions are. He says he has spoken to the club and that he would be ‘happy’ to stay if they survive next season, but one feels his heart is yearning for another adventure.

Lafferty, who also lists Norwich, Birmingham and Caykur Rizespor in Turkey as former employers, said: ‘I’ve come here to keep the team in the league and at the minute we’re heading in the right direction.

‘We’ll get the last game of the season over with and my agent will speak to the club but who knows, I’m open to offers and I’m hoping to play abroad again, I think that suits my style of football, but who knows. 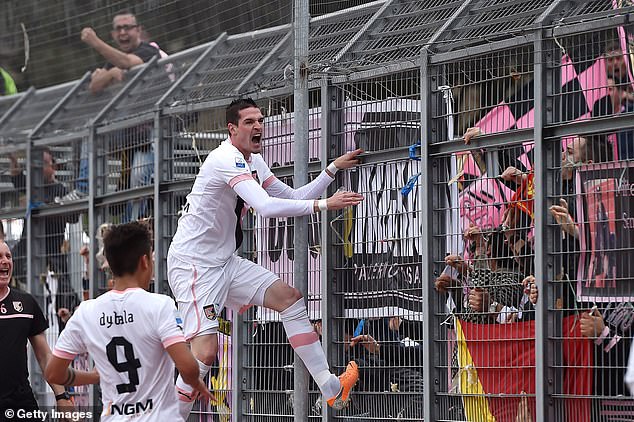 His exploits in Switzerland earned him a move to Palermo in Serie B, he’s seen here with Dybala 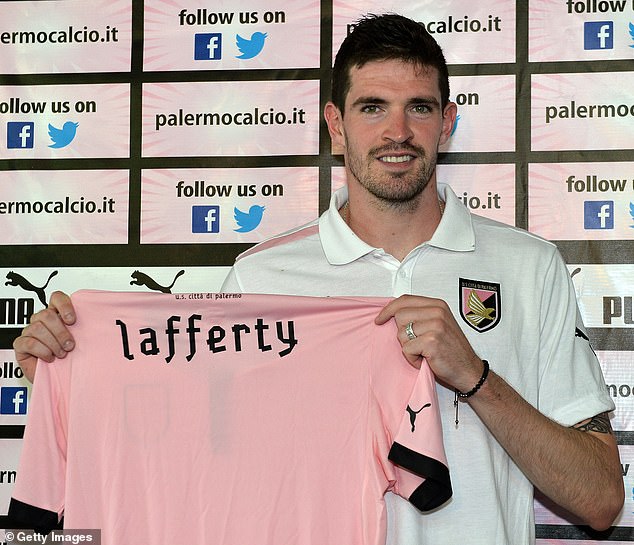 ‘If I’m here next season, then I’m happy. But if I’m not then it’s an experience and hopefully I’ve come here and saved the team from getting relegated.’

Lafferty’s European odyssey started when he left Ally McCoist’s Rangers after his first spell at Ibrox and joined FC Sion in Switzerland on a free transfer in the summer of 2012.

‘It was a shock after Glasgow but it was nice to be there to concentrate on football rather than having negative things written about you. There was none of that over there. You were left alone to do your own thing,’ he told The Telegraph of his move to the sleepy town that relieved him of the scrutiny that came with being a Rangers player. 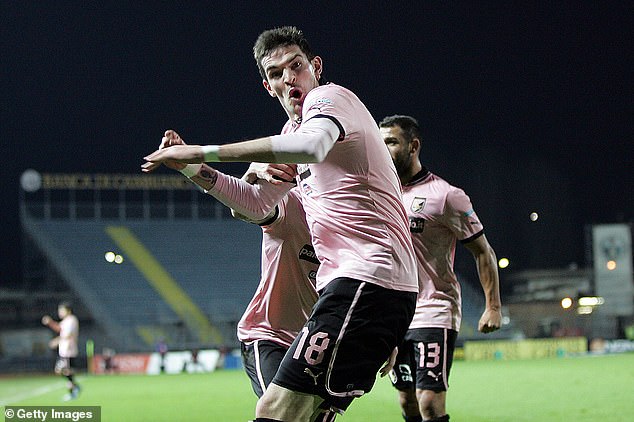 In the same interview, though, he said that the slow pace contributed to him sliding back into his well-documented gambling addiction. ‘When I was over there I was betting on ice hockey, which was on every single day, every single night,’ he explained.

But while fighting his demons, Lafferty still managed to find his goal-scoring touch, bagging a modest but respectable eight in 28, and earning himself a move to Palermo in Italy’s Serie B.

It was here that Lafferty excelled, scoring 11 goals in 34 games and helping his side get promoted to Serie A, being voted Fans’ Player of the Year, all while keeping a young Paulo Dybala out of the side. 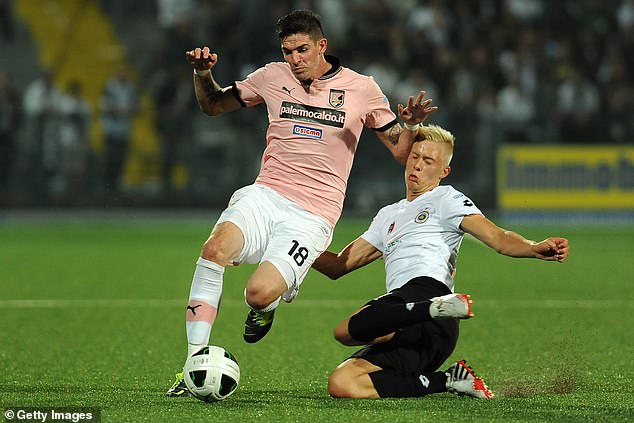 ‘He is an out-of-control womaniser, an Irishman without rules,’ the Palermo president said

But he left in extraordinary circumstances, with Palermo president Maurizio Zamparini saying that while Lafferty gave everything on the pitch, his off the field behaviour was questionable.

‘Lafferty is sold as a result of a precise request from my coach Beppe Iachini,’ Zamparini told Radio 24 in June 2014, before he was shipped off to Norwich.

‘He is an out-of-control womaniser, an Irishman without rules. He is someone who disappears for a week and goes on the hunt for women in Milan.

‘He has two families with six children, he never trains, and he’s completely off the rails. On the field he’s a great player, because he gave us everything he had and more. 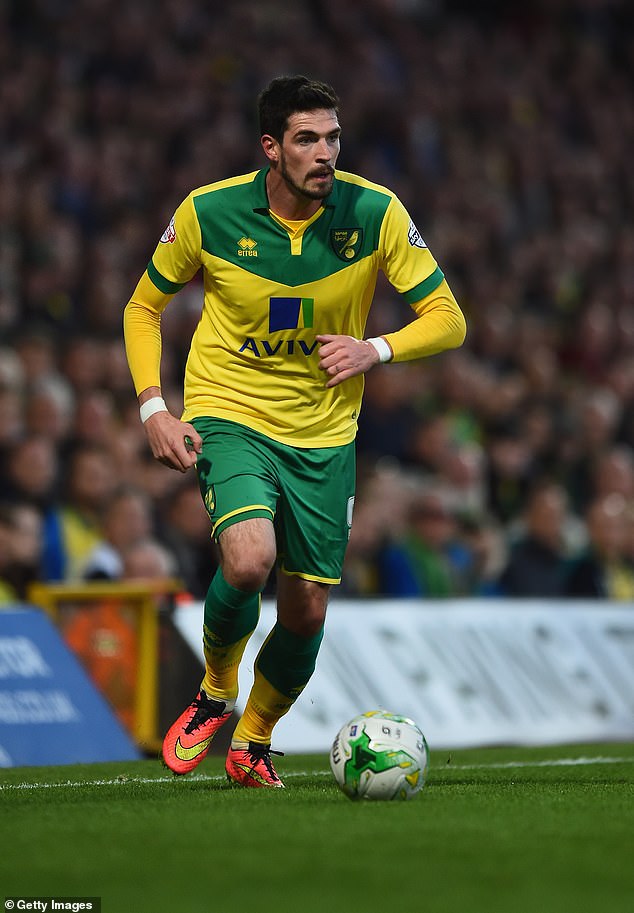 ‘In terms of his behaviour, however, he is uncontrollable. My coach told me he cannot sort this player out, so he has to go.’

While at Carrow Road he never cut the mustard and was loaned to Birmingham after a stint at Rizespor, his farthest conquest yet.

He scored two goals in 15 appearances on the coast of the Black Sea in the east of Turkey – 5000km from Enniskillen – and helped his side avoid relegation from the country’s top division.

It was reported that Rizespor wanted Lafferty on a permanent deal but he went back to Norwich and eventually enjoyed a successful spell at Hearts that earned him a switch to boyhood club Rangers again, six years after leaving. 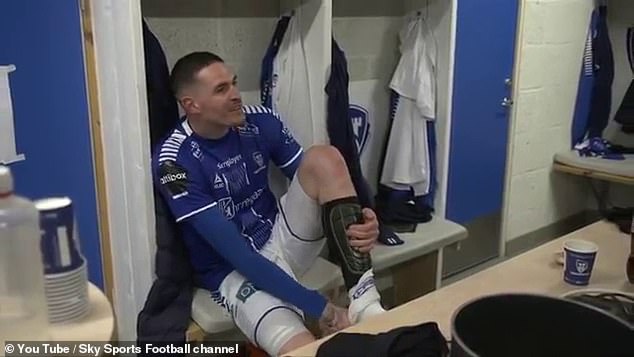 Sky went behind the scenes at Sarpsborg, where Lafferty has established himself as a leader 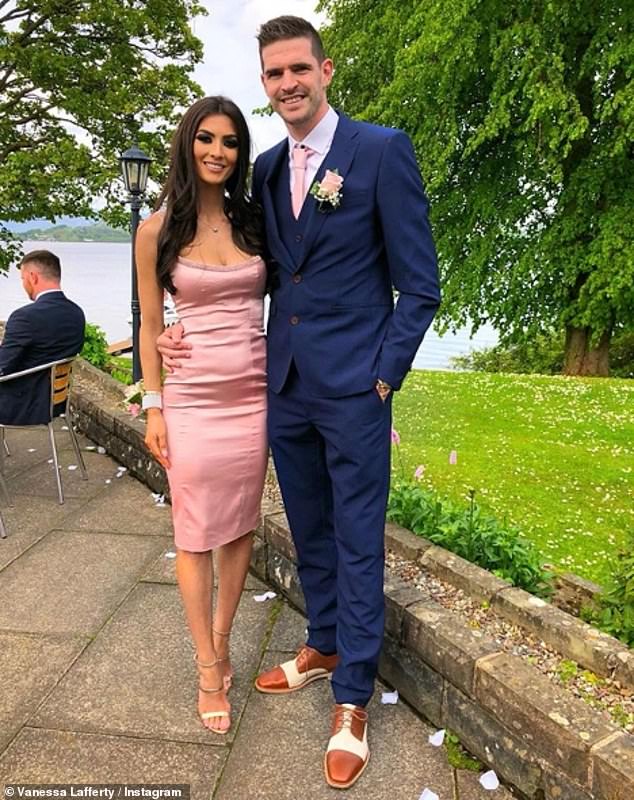 If a move suits him and his family (wife Vanessa pictured), he could be set for another switch

He joined Sarpsporg with 11 games to go in their campaign and with his stint likely to finish after Sunday’s Eliteserian finale, speculation naturally turns to his next move.

The Belfast Telegraph reported in July this year, before his transfer to Norway, that there is firm interest from the Middle East, and if it suits Lafferty and his family, he could be set for his most adventurous transfer yet, cropping up in either Qatar or Saudi Arabia.

He was named in Michael O’Neill’s 25-man squad for Northern Ireland’s Euro qualifiers against Holland and Germany but the departing boss said the striker ‘is at an important phase of his career’ and faces a ‘difficult situation’ as he won’t be able to play until January.

His most concrete option comes in the form of a Bulgarian side now under the tutelage of an ex international teammate.

Warren Feeney, now managing OFK Pirin in Bulgaria, has said that signing his former accomplice is ‘certainly something we are looking at,’ adding that he can offer Lafferty ‘regular first team football’ after the Bulgarian teams regroup in February after a winter break.

Interest from Cypriot rivals AEL Limassol and Apollon Limassol has also been mooted but it might even be fair to say that Lafferty himself doesn’t even know what the future holds.