‘We haven’t had this type of player since Lewandowski’: Marco Reus on Haaland’s arrival at BVB

‘We haven’t had this type of player since Lewandowski’: Marco Reus ecstatic at arrival of Erling Braut Haaland at Borussia Dortmund

Dortmund beat a number of Europe’s elite clubs, including Manchester United, to the signing of the Norwegian striker, who has scored 28 goals in 22 matches already this season.

And Reus, who has played for Dortmund since 2012, says that Haaland reminds him of his former team-mate Robert Lewandowski.

Speaking of his arrival at Dortmund’s Marbella training campe, Reus told Sky Deutschland: ‘He’s very open-minded and it’s important to get to know everyone first – a training camp like this is ideal.

‘Now it’s about getting really fit, arriving properly. It will take time, we’ll give it to him. He just gives us another input, another way we can play.

‘I don’t think we have had this type of player since Lewy [Lewandowski]. He gives us the opportunity to be more flexible and able to react to different scores.

‘It makes us feel good. Now he has to get well and get to know everyone properly – we have to, too. We have to go with him and his strengths, but that will all happen over time. 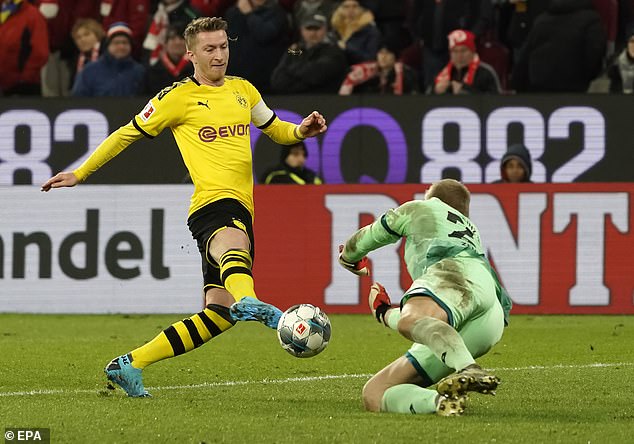 ‘Paco [Alcacer] really boomed at the beginning, then he was injured longer. Then the coach decided differently.

‘As I said, Haaland gives us many opportunities to play football, but ultimately the coach has to decide who will be used.

‘For me and other players, we have new options with Haaland, sometimes long balls. In football it’s important to be flexible and we have achieved that.

‘We have now got a very good striker and with it new options, so we’re well positioned.’