Darren Fletcher and Micah Richards have put the boot into Manchester United after their hapless display in the humiliating 3-1 defeat in the first leg of their Carabao Cup semi-final against arch-rivals City.

Ole Gunnar Solskjaer’s men were outclassed in every department as City threatened to run riot at Old Trafford before a slightly improved second-half performance saw Marcus Rashford score to keep a glimmer of hope alive for United.

Make no bones about it though, this was a night to forget for United as the brilliant Bernardo Silva and Riyad Mahrez tore them to shreds in an irresistible opening 45 minutes from City, who now have one foot in the final. 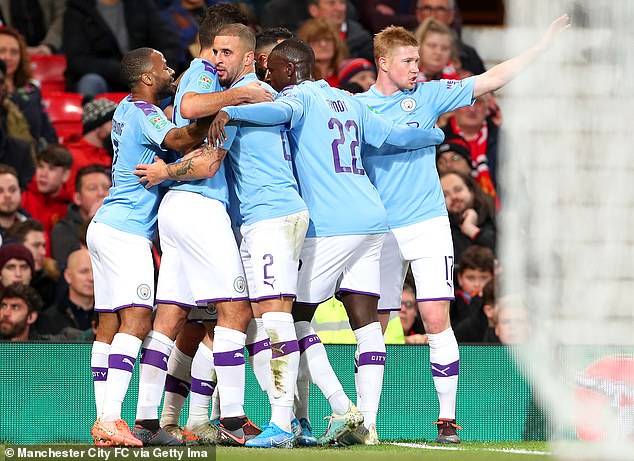 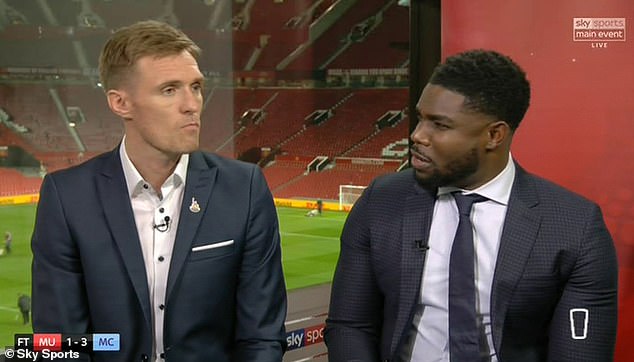 If it weren’t for City easing up after the break, and some wasteful finishing in the first half the result could have been even more damaging.

Silva first scored a belter, cutting in on to his left to unleash an unstoppable shot into the top corner. It was poor from United, who afforded the Portugal star way too much room.

Silva turned provider for the second, slotting in Riyad Mahrez to round David de Gea and tap home. City’s third came when a save from De Gea cannoned in off Andreas Pereira’s knee.

Although this ultimately came down to quality, Richards and Fletcher, the former in particular, felt United’s desire to compete for the ball left a lot to be desired.

Richards told Sky Sports: ‘Put in a tackle. If things are not going right, especially in a derby. When we used to play, we were the underdogs. We knew if we got in your faces we would make it hard for you.

‘It is almost like when City went two, three up, they gave up a little bit, yes half-time changed it a bit.

‘As a footballer, make a few tackles, especially in a derby. I think United accepted defeat, yeah they got a goal back but it was a consolation. In the league, they dropped off, forced City to come to them and hit them on the counter attack.

‘They got overexcited with that result in the league and underestimated how good a team City are. City won the league twice in a row and you have to respect that. 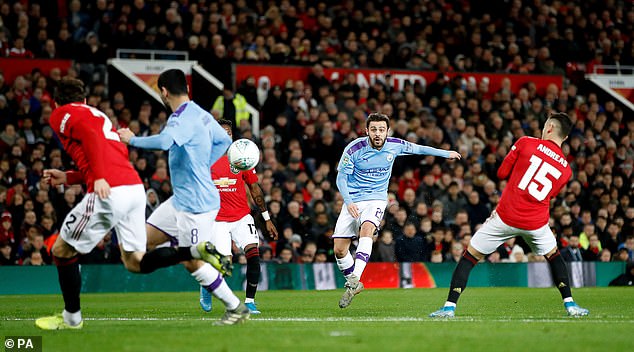 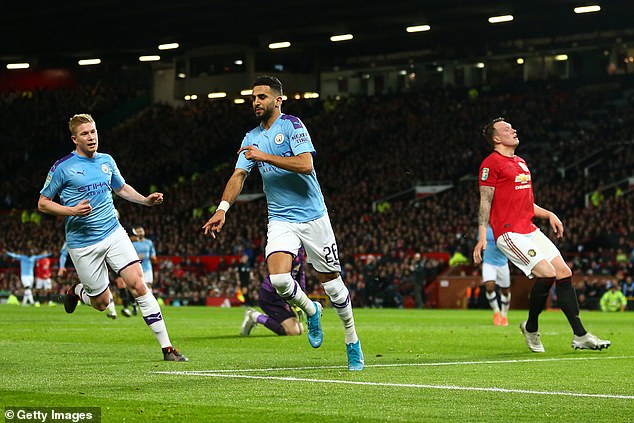 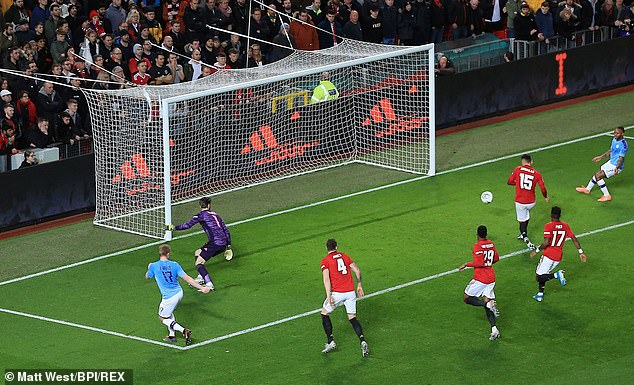 ‘There was no fight, there was no grit. No player was going round putting in a tackle and respecting how good a team City are.

‘City, even when United won at the Etihad, City still had a lot of the ball but United were cuter in how they set up. Today it was like we beat City before, we can do it again and they got away from the basics that made them win the last game. They were a bit naive.’

A despondent Fletcher echoed Richards’ sentiments, and claimed that United are in desperate need of leaders.

‘Ole spoke before the game about their youthful energy the team had, but they were a bit naive and lightweight,’ he added.

‘The centre-halves were marking nobody so the midfield was overloaded. You would like somebody to take initiative, can somebody go in and engage. Sometimes you have to take responsibility. I’m sure Solskjaer would give his players responsibility.

United’s performance was heavily critcised by the pundits, who felt it lacked ‘fight’ and ‘grit’ 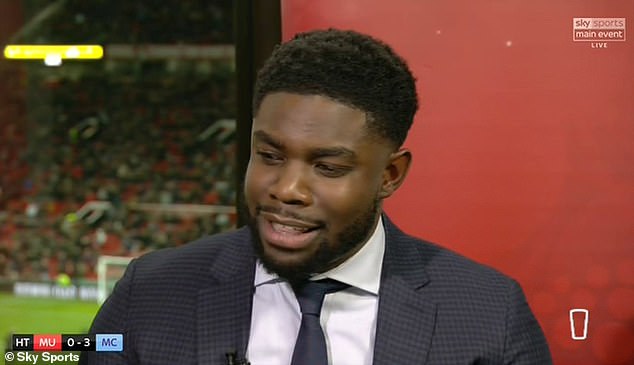 Richards said: ‘It is almost like when City went two, three up, they gave up a little bit’ 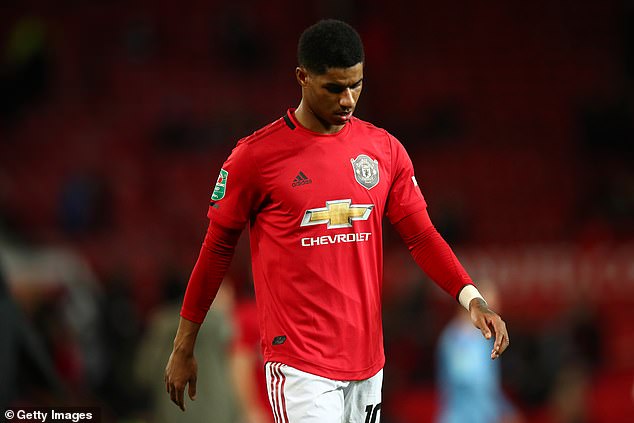 Marcus Rashford, who grabbed one back for United, looks dejected as he heads off the pitch

‘He has two experienced centre halves who have to realise they are marking nobody. They can see the young midfielders getting outnumbered all over the place.

Although Fletcher believes the accountability for the defeat has to lie with Solskjaer, he also feels that the players need to accept that they are the ones who can directly impact what happens on the pitch. 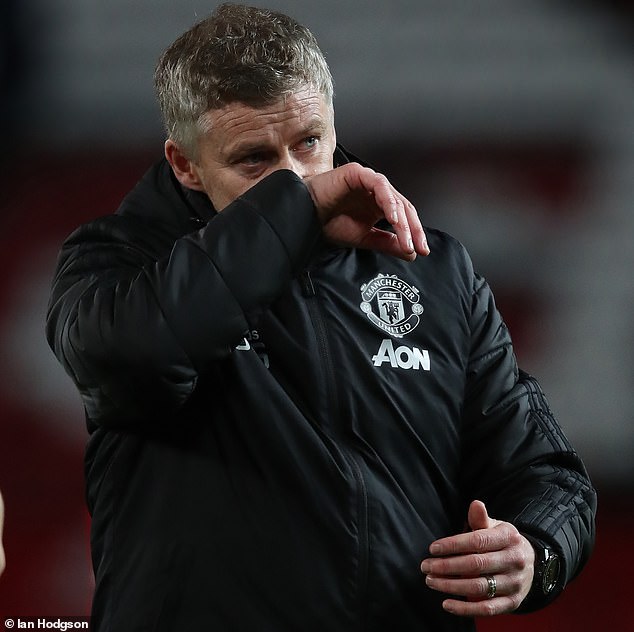 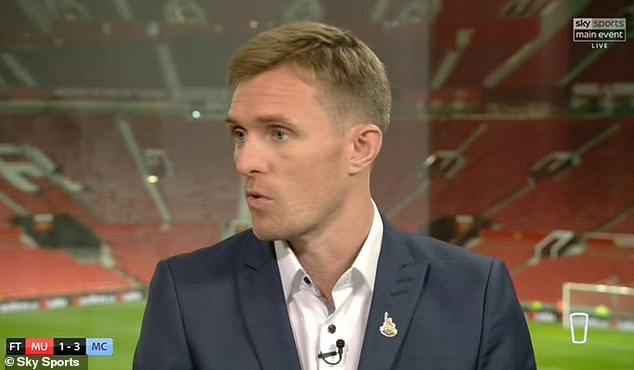 He added: ‘Ole has spoken about developing the squad and how reactions last season weren’t good enough. He will be happy with the second-half reaction, we can speak about how disappointed we were with the first half, but there were a few tackles second half.

‘Sometimes players have to take responsibility on the pitch and I think he was looking for his team to do that. Solve some problems yourself. Two centre backs can’t stand for the whole half and mark nobody, somebody has to do something different. Change it yourself, be brave, make a decision, which is what we had under Sir Alex Ferguson. I’m sure Ole has given them responsibility to do that as well.