The pre-match clappers were thrashed with a giddy ferocity to rekindle the mood of the Leicester miracle.

Lights flashed, the drums beat and the big screens flickered with footage from those heady days in the last decade when they became champions and from further back in time when they had a winning relationship with this competition.

They flocked to the King Power in expectation against rivals who are deep in relegation trouble, lurking 24 points below them in the Premier League, in the midst of an injury crisis, with the first-choice goalkeeper out and no fit strikers. 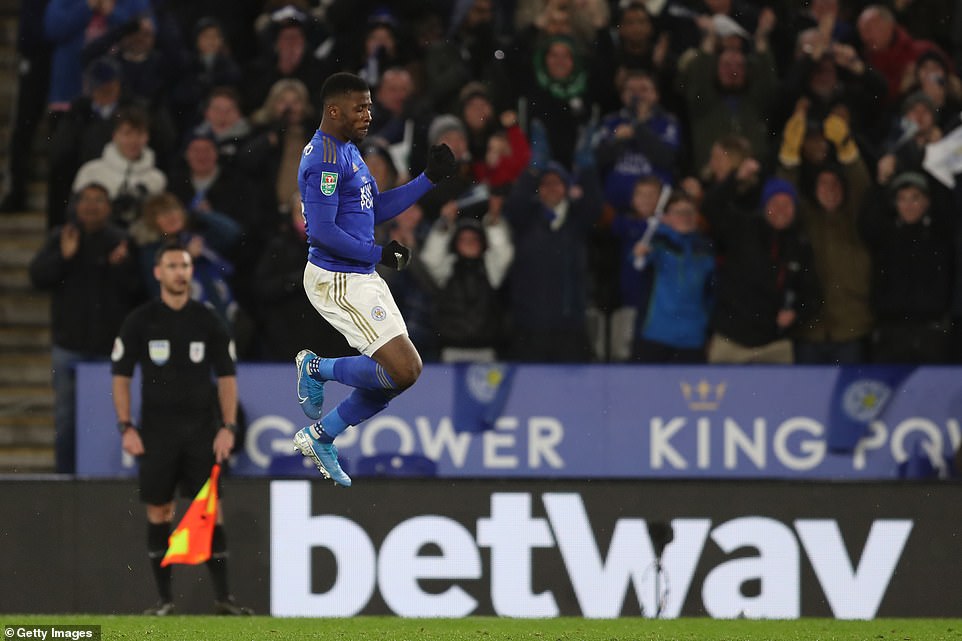 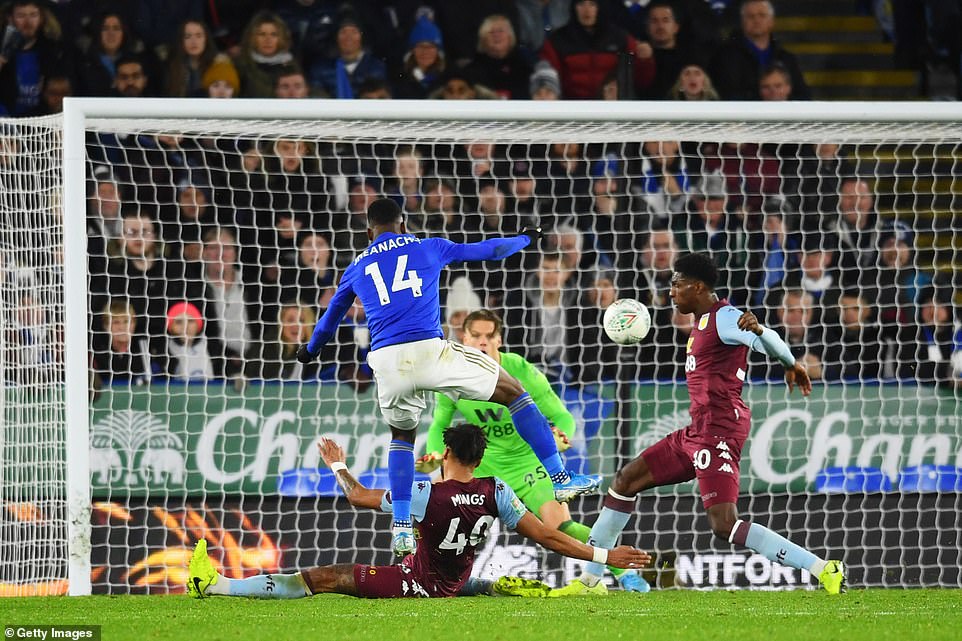 Then again, who needs strikers this week? Twenty-four hours earlier, Manchester City had opted not to start with any and swept to victory away from home in the first leg of their semi-final against Manchester United.

Aston Villa, searching for a first trophy in 24 years, travelled east across the Midlands to defend and they did it well. For 75 minutes they were exceptional at the back, inspired by much-maligned goalkeeper Orjan Nyland who frustrated the Premier League’s top scorer Jamie Vardy.

Dean Smith’s three central defenders were disciplined and focused, limiting the space in behind which Vardy likes to hunt in, and the midfield shield offered protection. The visitors blocked shots and cleared crosses and relied upon Jack Grealish to buy them brief moments of relief with his strength and ability to keep the ball.

For more than half of the game Villa held the lead, thanks to a toe-poke from wing-back Frederic Guilbert and almost stretched further ahead when Ezri Konsa headed against the bar before half-time.

But Leicester are not in the habit of losing under Brendan Rodgers and they refused to roll over and accept defeat.

Kelechi Iheanacho came off the bench to pounce on a rare moment of sloppiness in the Villa defence and level the tie 15 minutes before the end. 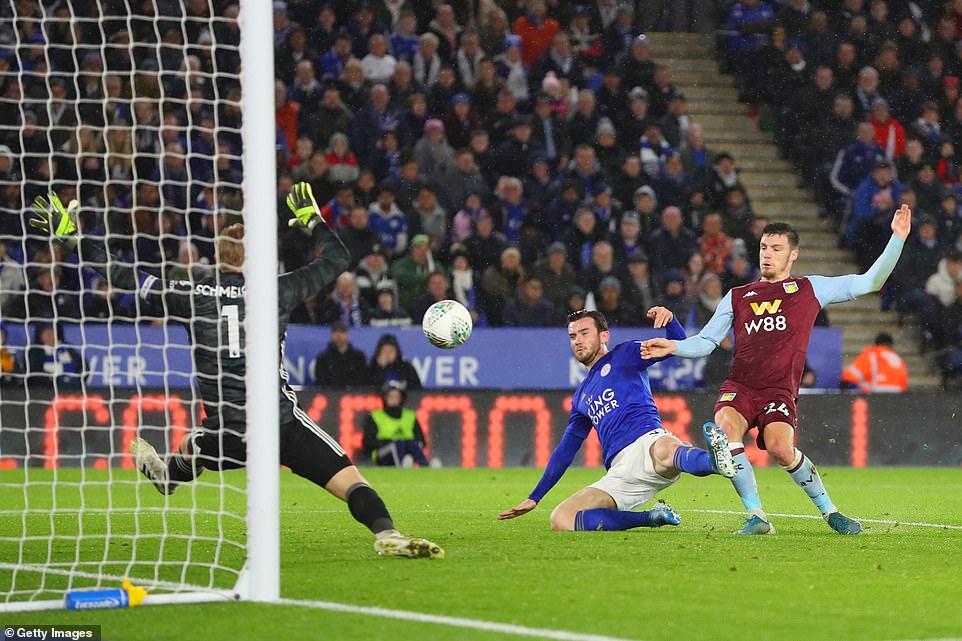 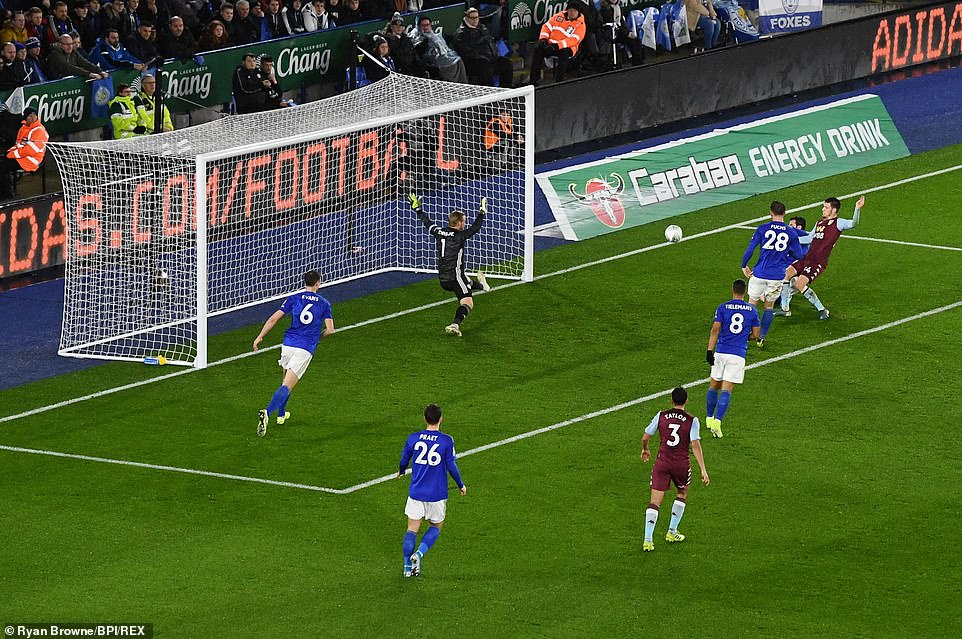 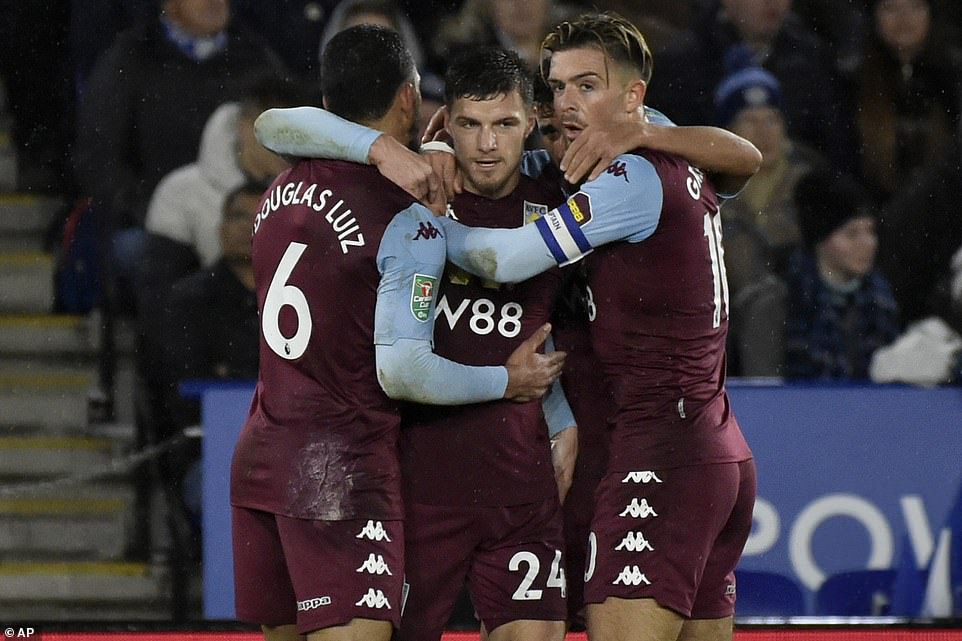 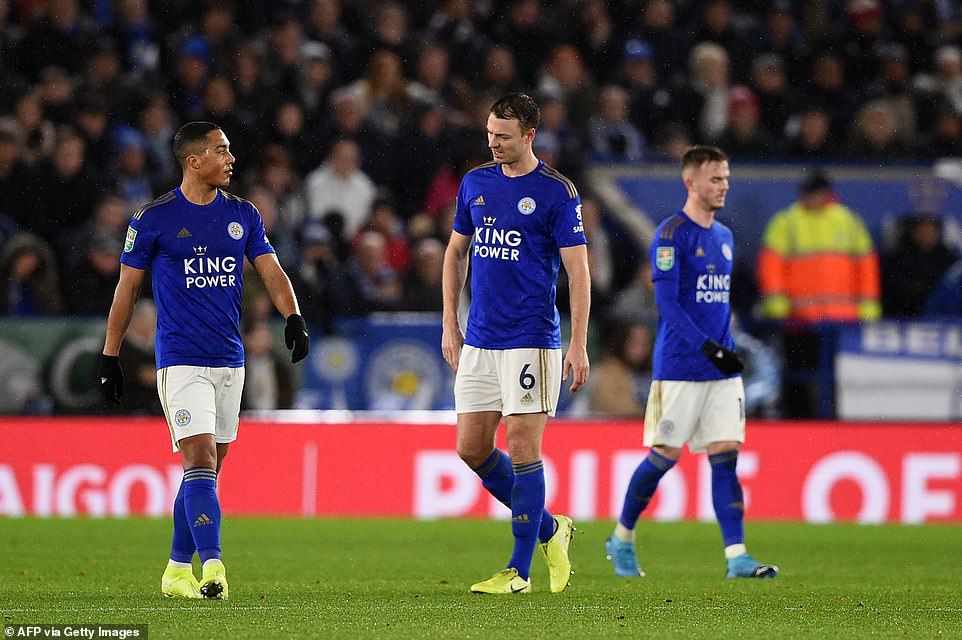 Leicester players, including centre half Jonny Evans, appeared dejected after conceding the opener against their opponents

Konsa’s short free-kick out of defence, intended for Douglas Luiz, was smartly anticipated by Hamza Choudhury who had been introduced at half-time by Rodgers and added extra bite and urgency to Leicester’s midfield.

Choudhury snapped in to take the ball from Luiz, found Vardy who moved it forward swiftly for Iheanacho to slam a confident finish past Nyland.

The clappers sounded once again. Leicester sensed a second goal and a first-leg lead. They poured forward with menace. Vardy crashed another low drive into the side-netting and Caglar Soyuncu headed the final chance of the game into the grateful arms of Nyland.

Villa’s Norwegian goalkeeper, deputising for the injured Tom Heaton and aware the club were desperately searching for a replacement, responded well to the challenge, his morale boosted by good early saves to deny Vardy.

Jonathan Kodija fell ill on the eve of the game and left Smith without a senior centre-forward which meant a central role for Anwar El Ghazi. 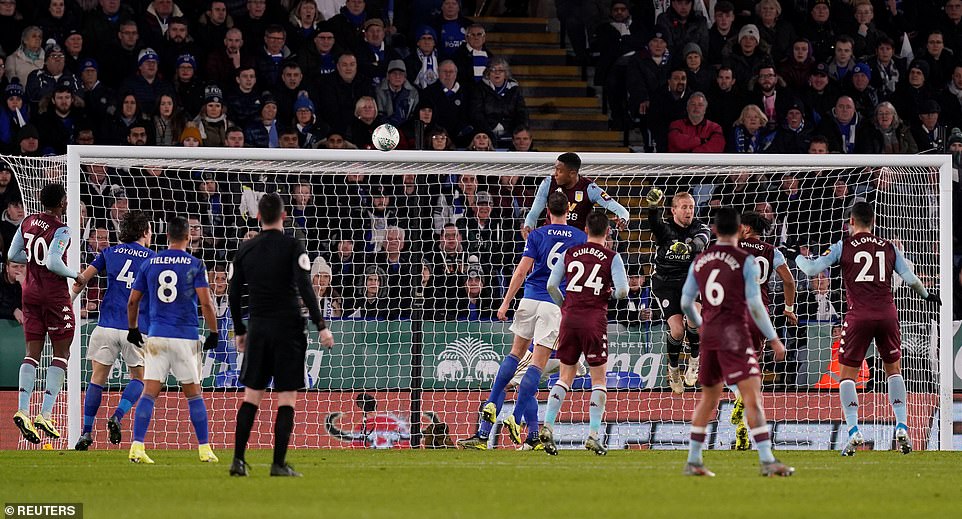 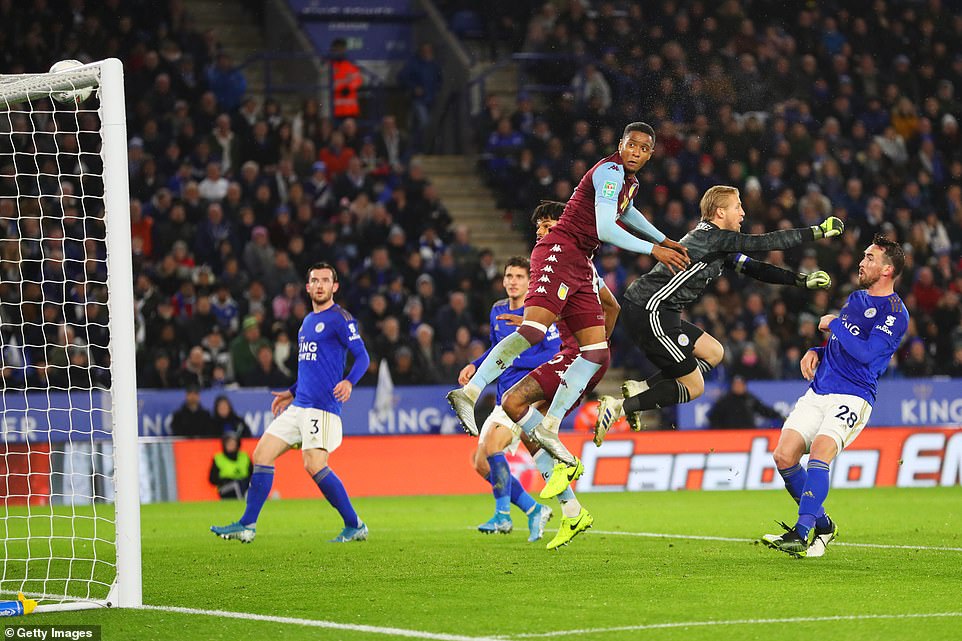 The onrushing Schmeichel appeared to put off the centre half, who couldn’t guide his header into the unguarded net

They offered very little threat in attack until Grealish collected the ball and forged into Leicester territory, in the 28th minute, cut in from the right and tried to find El Ghazi. Soyuncu slid to cut out the pass but Villa recycled possession out to the left wing.

El Ghazi produced a fine swerving cross and Guilbert beat Ben Chilwell at the back post to stab the ball past Kasper Schmeichel.

Three minutes before the interval they went close to a second when Schmeichel abandoned his goal in an attempt to reach a free-kick from Grealish and misjudged the flight. Konsa nipped in ahead of the ‘keeper, sprang high and headed the ball against the bar.

Relief washed around the King Power. Rodgers sent on Choudhury at half-time and later conceded he ought to have started with him rather than Dennis Praet to replace Wilfred Ndidi who picked up an injury on the eve of the game which is expected to rule him out for up to a month. 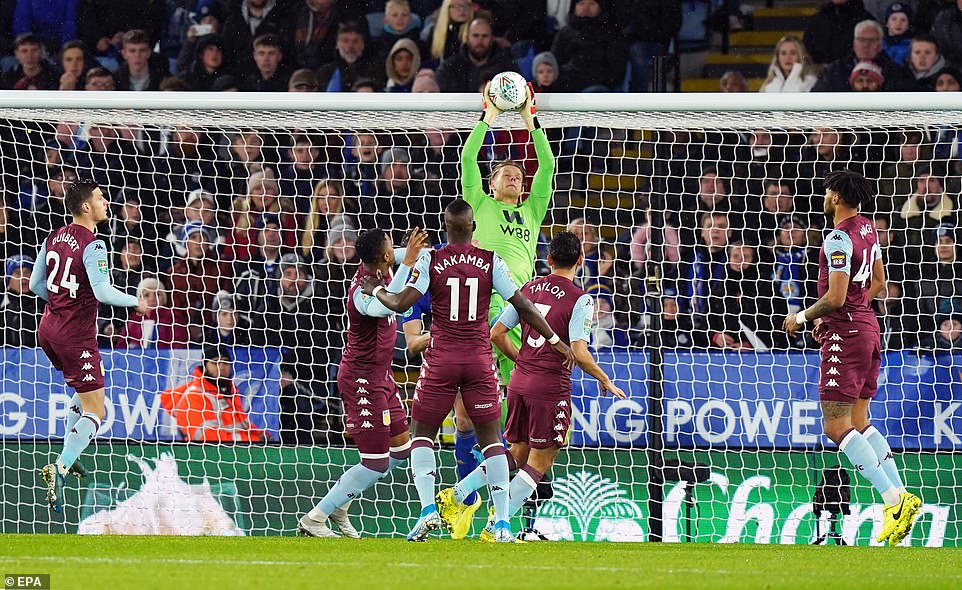 Villa goalkeeper Orjan Nyland, ably deputising for the injured Tom Heaton, rose highest to collect a cross in the first half 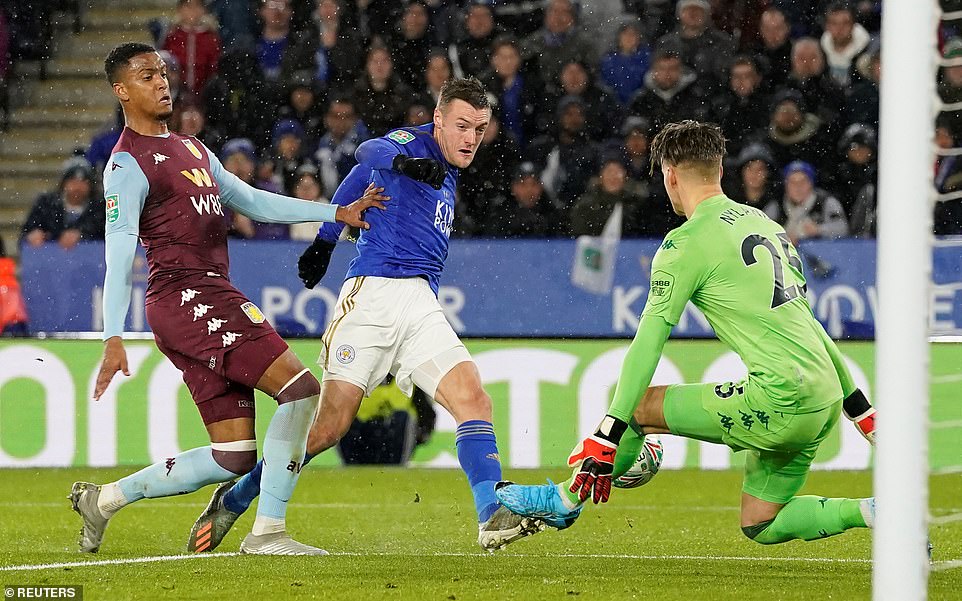 James Maddison danced through a crowded penalty box but was unable to beat Nyland and Smith reacted by reinforcing in midfield with Conor Hourihane.

Leicester dominated possession and deserved their equaliser. Iheanacho had only been on the pitch for six minutes when he struck to ensure a frenzied final 15 minutes. The clappers were thrashed once again but the away fans were celebrating hardest at the end.

They could not cling to their advantage and buck Rodgers’ trend in domestic cup ties. The Leicester boss has not lost one for nearly five years when a Grealish-inspired Villa beat his Liverpool team at Wembley in an FA Cup semi-final.

Few gave them a prayer on that occasion. And it was the same again for Smith’s depleted side last night but they are firmly in the tie with a shot at completing a return to Wembley when they reconvene for the second leg at Villa Park. 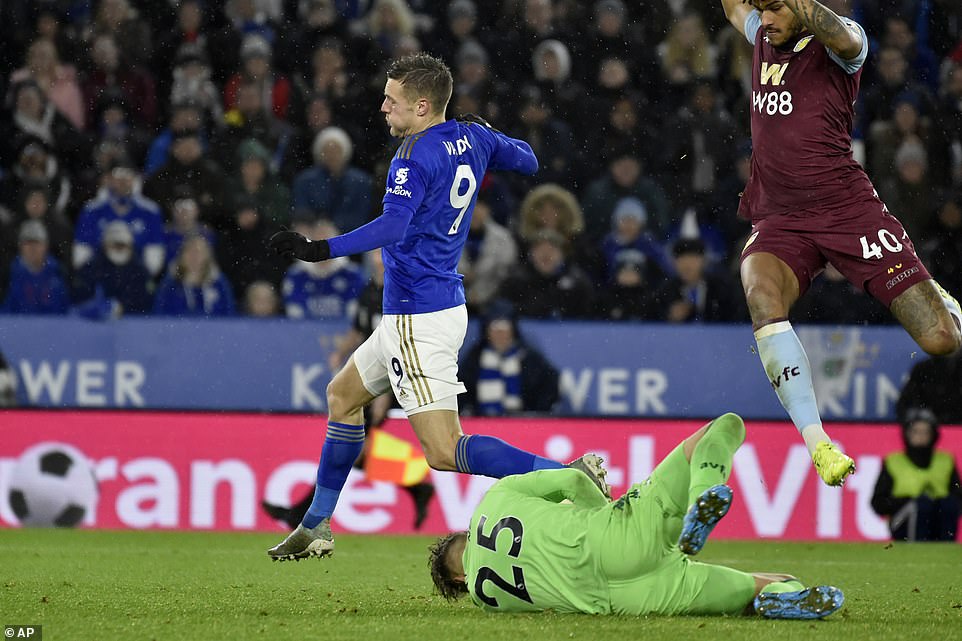 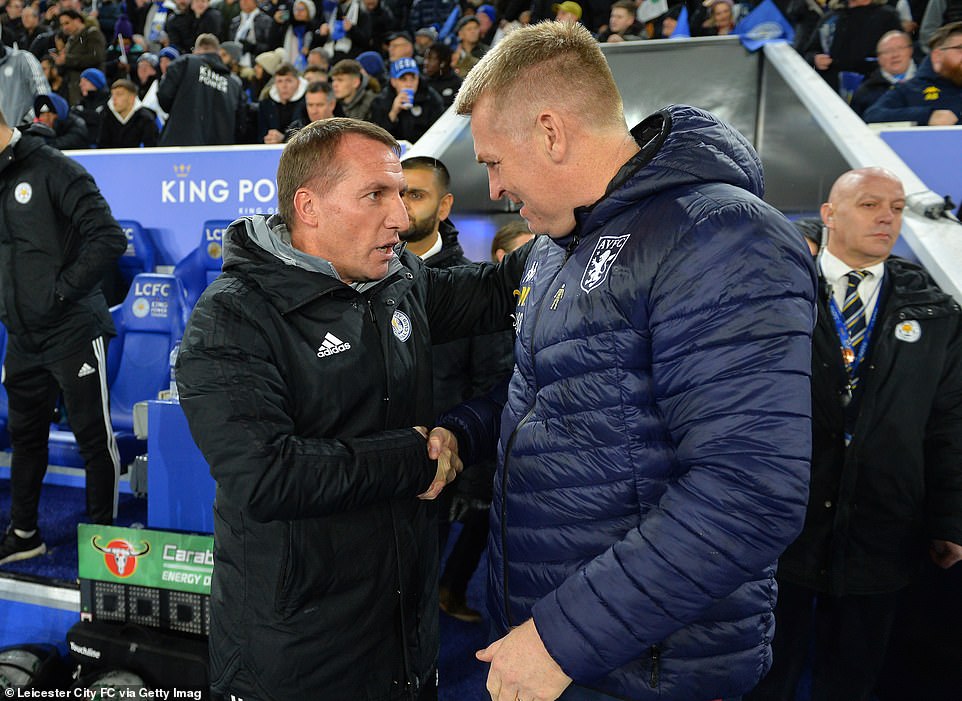